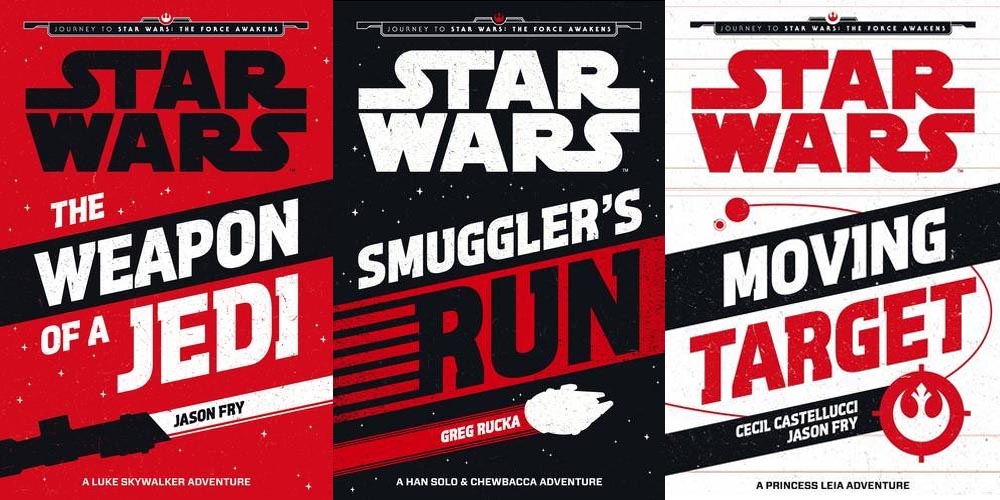 When the Journey to the Force Awakens campaign was announced, it was notable for having some quite interesting authors in its Young Adult complement. Names like Jason Fry and Greg Rucka being the cases for me. Even so, I can’t say I usually opt for YA material, but then those guys are writing it… Decisions, decisions – a good pre-order deal made it for me, might as well bag four hardbacks for around £30. At the same time, I also got Aftermath. The big surprise? Of these books Aftermath feels far more restricted in what it can do, while this YA quartet actually drops hints about the upcoming The Force Awakens and the galactic situation. Surely Aftermath should have done that? Nope.

The other surprise factor here is how good each book was at its assigned task. Writing Luke Skywalker has been compared to writing Superman and Captain America, how do you make such a decent guy interesting? Fry made it look easy. A story of Han and Chewie? That one is the deceptive option, the one everyone thinks is easy, but really isn’t. Rucka sent that one to the stratosphere. Castellucci and Fry then double teamed to deliver a great Leia story. And with Lost Stars, Claudia Gray delivered one of the most unexpectedly epic books in years. What made them work? Brilliant foundation concepts and character observations. Concepts that after you have read each appear so incredibly obvious, yet, if they were that, why did these stories not exist already?

The brilliance of Leia’s story is that it tells the story without much focus on Leia. Some stories have tried to be more introspective where Leia’s concerned and it just doesn’t work, it’s not that she doesn’t care, rather that she needs to keep moving lest she stop and be greeted by a personal hell that’ll consume her. The creator of that hell? Tarkin and the Death Star, which is the other stroke of brilliance: What impact did the discovery of the construction of the second Death Star have on Leia? It seems such an easy question to ask, yet until now, I don’t recall anyone asking it. The final piece in Moving Target is: How far will Leia go for what Han terms her revolution? The book explores this very effectively indeed. 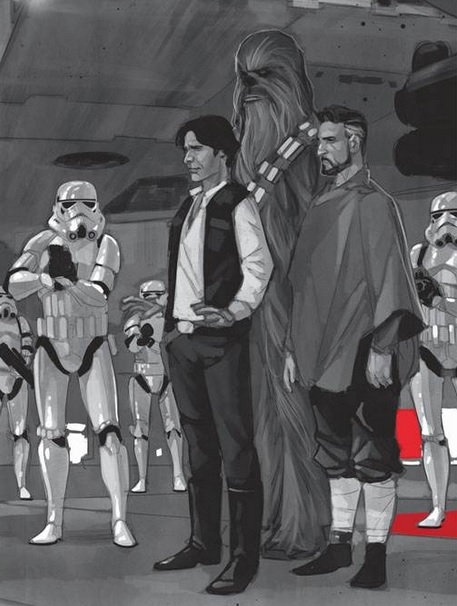 Where Han and Chewie is concerned, Rucka makes a couple of equally adept moves. One is to realize that they work best when paired, so don’t split them up, don’t isolate them, keep ‘em together. The second is, by himself, even with Chewie, Solo needs an idealist to play off. In the films that’s Kenobi, Luke, Leia, sometimes people like Rieekan or Lando, in Smuggler’s Run it’s Ematt, a rebel scout / spy he has to get out of hot water. This sets up the ongoing conflict in Solo between what he says he believes and what he actually does. For all Han sells his acts as self-preservation it’s a bit more than that, also would Chewie really hang around if Han was the amoral sleazebag he tends to perceive himself as?

Then there’s Luke. One of the errors of other stories where pre-Empire, post-nuking-the-Death Star Luke is concerned is they render him too gung-ho. Luke isn’t that. He certainly wants to keep opposing the Empire, nor can he refuse those who need help but he isn’t going to rush in too blindly. That’s not to say he doesn’t get ambushed, but he doesn’t get ambushed stupidly. And that’s actually sufficient – Luke is a character that doesn’t need angst or drama. Weapon of a Jedi is constructed around how he learns more of the Force, without Kenobi to teach him, with all the challenges that that entails.

Finally, Lost Stars. This should not have worked. It should have exploded on take-off, it should have been a set of walking stereotypes and a cardboard thin romance. After the Attack of the Clones horror romance, no one could be blamed for being wary of a romance novel – especially between a Rebel and Imperial. Instead, it executed two excellent concepts – each of the principal characters have psychological flaws that both propel them to success but also danger. Each does perceive their flaws but their ability to escape or overcome them varies and the reader is given perfect clarity as to why. The book throws down a gauntlet to its reader: Think it’s easy to judge situations? Try these!

That attitude of intelligently engaging the reader follows through to its ambition in spinning a story that covers fifteen years in one volume of 560 pages. For all some may bring up page font size and spacing, it’s still a substantial read. At the same time it gets some flak for having the characters progress through the original films, as they just so happen to be present, in one form or another, at all the major events. What that also does is show the narrative flow from one film to the next, but through a filter we’ve never seen before. How do those serving the Empire do so after Alderaan? The book gives some surprising responses. 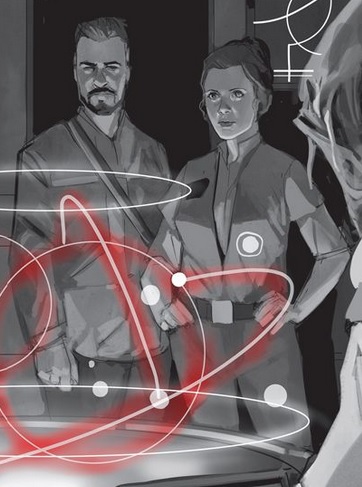 On the Luke, Han and Leia books there are some quite excellent prologue and epilogue sections. It is these that show how prohibited Aftermath is in comparison, as they are clearly set at the time of TFA! True, they are only hints, but even so, to get these in a set of YA books is very unexpected. What’s even better is the nature of the hints – Han and Chewie are clearly up to something, Jessica Pava is a new X-wing pilot, while Leia reveals the most about the wider picture. They’re just enough to intrigue without revealing too much.

Finally, there’s the role of editorial. One of the more cynical observations is that the books are being by the same people as before the reboot, so how good can they be? Wrong. These books are not published by Del Rey / Century but Lucasfilm Press. Scattered across the quartet of books are covert references to the other stories. Lost Stars picks up things from the character books, while there’s a link between the Han-Chewie and Leia ones. Each is a great Easter Egg, you do not need to notice these to enjoy any specific book, but if you do notice them they enhance your reading experience. For these to be present is quite the statement of intent from the editors!

It is fair to say none of what I have sketched is revolutionary. Yet if it were so easy and obvious, why do these books stand out? The obvious answer is that it is not. It is rare to find books that engage and positively challenge the reader, in the way Lost Stars does. It is rare to find stories so well crafted to act as character spotlights, while showing why they all work so well as an ensemble and is entertaining in equal measure. In short, there’s nothing obvious about any of this quartet!

One thought to “Force Friday Flashback: So Very Obvious—But Is It?”