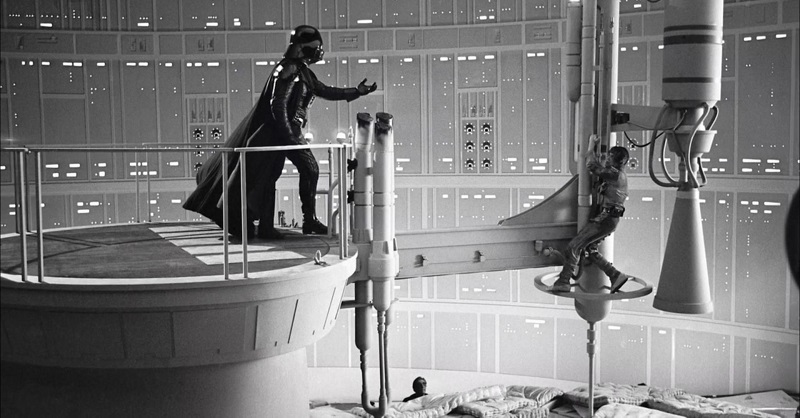 The use of spoiler tags in internet discussion arose from the best of intentions – and therein lies the rub, for where does the road of good intent often lead? In this case to a hell of spoiler tags! Like so many other things, the problem is not tags but how they are used and understood. This in turn raises the question of what a spoiler is understood to be, past and present. It should be emphasized here that there are no The Force Awakens spoilers, of any kind, in this article.

The key point is it used to be that a “spoiler” piece of information was deemed to be that of a major story revelation. No one is ever going to have any mercy or understanding for the guy who tells someone who has just started The Empire Strikes Back, having never seen it before or heard of its plot bombshell – yes, it’s possible – that they will never believe Vader is Luke’s dad. It will always come under the category of a douche move. Over time, however, the understanding and definition has widened greatly, to the current point whereby any information about a story in advance of its release is deemed to be a spoiler. Can this really be correct and worthwhile for anyone? I am highly skeptical, especially as marketing relies upon giving the consumer information snippets to engage their interest.

On some Legends books there would be a Dramatis Personae list of the main characters in it. Often this would be one of the preview items ahead of the book’s release, as it teases plenty but gives little of the actual plot context. For TFA, I’ve used a very successful strategy of having no interest in the numerous clickbait rumours and miscellaneous crap that’s been spewed across the internet in the manner of a permanently incontinent pigeon. It’s worked. While I have watched long-time net friends work themselves into great distress over the latest stream of bullshit, I’ve been fine. Due to the lack of exposure, the little pieces of official info I’ve come across lack much in the way of plot context. I may have a couple of pieces of a, say, 500-piece puzzle, but I don’t have the overall picture, so I am well insulated against any spoilers. So, unless you have some actual knowledge of the plot of a story, a Dramatis Personae list, on its own, tells you bugger all about it, save that it has this or that character.

What about book covers and movie posters? Again, unless you have actually sought out dubious information not freely available, what can they reveal save that this or that character in is in it? The notorious ‘death spot’ on New Jedi Order novel covers came about in part because someone managed to get their hands on info that a certain character would die. In later years, Del Rey even went and executed another character that was in that same spot – I doubt that was accidental.

What then of the big revelations? What of trailers? Well, here’s the thing – a trailer’s purpose is to encourage the audience to go and see the film when it comes out. It may have some revelations about the plot, but it should retain some surprises. One of the big problems in recent years has been a tendency for a film to place all its good stuff in a trailer! People see the trailer, are impressed and then find the film has nothing left to show off – thus there is a justifiable wariness now around trailers. It is then a great pity that TFA’s trailers have to pay for the sins of other, lesser movies.  As even the latest, final trailer released a week ago has been remarkably cagey and restrained in comparison. Some of that restraint can likely be attributed to Abrams’s desire to keep the big revelations secret as long as possible, but is it just him? I doubt that. Rather it could be seen as an indicator of the new approach that’s been running since Disney bought Lucasfilm.

So, where do you draw the line on what is or is not a spoiler? With the most recent trailer, there have been expressions of no interest in it from some because they want to be entirely surprised and consider having any info about the movie to constitute spoilage. For myself, I have a moderate interest in casting news – not casting rumours – but ultimately, it’s about how they execute it. A story might, in summary, sound horrendous but, if it’s executed well, it can be quite excellent. Plus, SW has always had that pulp heritage of quite absurd plots that nonetheless work in the final product.

What then is a reasonable compromise for those who do not wish to be subject to details they may consider to be spoilers or close to it? I’d see the Jedi Council Lit position as a good one: official info is fine, no rumours, no leaks or other rubbish. If people do not wish to see that official info then they don’t have to read the thread and many don’t, I’m an at best infrequent poster there. Yet even there, for a short while, the new poster for TFA was spoiler-coded just in case. Should it have been? Arguably not. But what if someone saw it who didn’t want to? Well, they could have not read the thread instead, couldn’t they?

I’ve my criticisms of how it set it up, but one of the more interesting aspects of the New Jedi Order story was that, to all intents and purposes, no one really knew what they meant by the terms ‘good’ and ‘evil’. They had become empty labels. NJO set that problem up as part of its overall arc and it supplied an interesting answer that unfortunately went nowhere in the long term. Is the term ‘spoiler’ akin to this? It’s invoked often enough, but is there a clear idea of what is meant? Equally, is the use of it diluting its impact due to the frequency? Maybe an answer is to go for a spoiler version of the golden rule: If info piece X would ruin the story for you, then spoiler-code it, but when others see it differently? Go with the official info limitation and permissions.