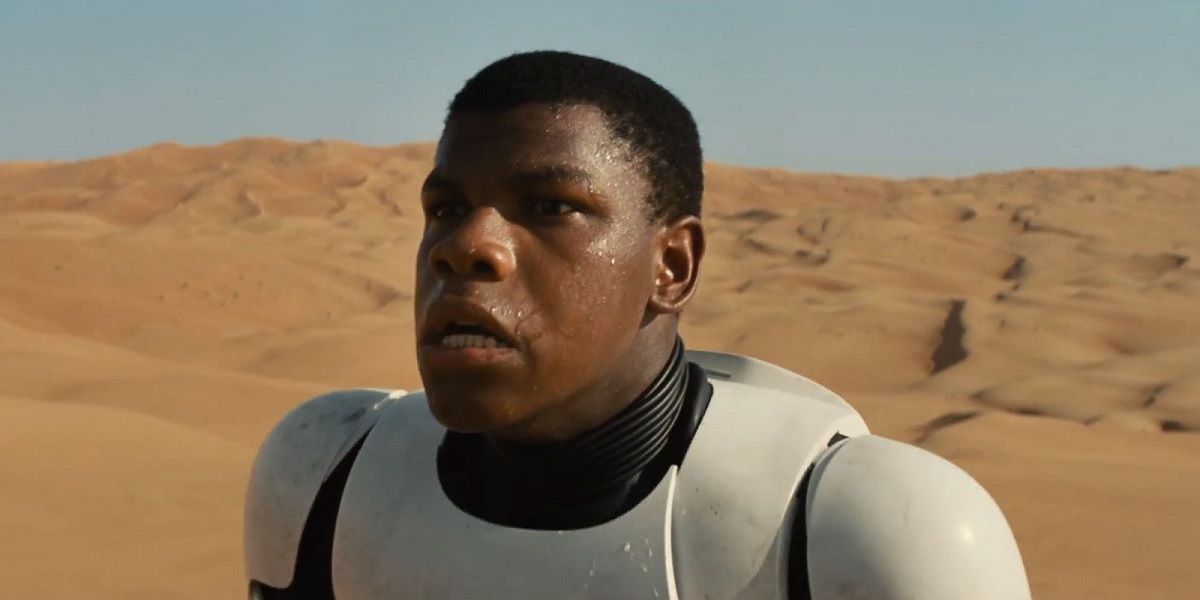 As the release of The Force Awakens gets ever closer, Star Wars is reentering the public consciousness to a degree not seen since 2005—when Twitter and Tumblr didn’t exist, and YouTube and Facebook barely existed. Within Star Wars fandom, TheForce.Net was still the dominant fan news source, and Wookieepedia was a brand-new idea. For both real-world and internet culture, it was a very different time.

And now that it’s happening again, we’re seeing some growing pains as our beloved franchise reenters the mainstream. To my mind, another term for “mainstream” is “lowest common denominator”; and in addition to the many awesome new fans, we’re also earning extra attention from the worst people the internet has to offer—people who have had a decade to coalesce and to practice raising hell. Kathleen Kennedy, bless her heart, seems perfectly happy to challenge those people on every front, by not only adding several women and people of color to TFA, but putting them right out front—while at the same time, Star Wars is represented on television by a group of entirely nonwhite protagonists, and in publishing by more female Imperials than you can shake an E-11 at and more new queer characters than existed in the last thirty-plus years put together.

But this piece isn’t about character diversity and how cool that all is; we’ve made our feelings clear on that by now. Instead, I want to make a larger point that proceeds from diversity being self-evidently a good thing; in fact, that I don’t feel the need to argue that position right now is the point I want to make.

Of course, first I’m going to have to talk matter-of-factly about American politics for a minute. #sorrynotsorry. As long as President Barack Obama has been around, since even a bit before he was president, there have been small yet occasionally vocal groups of people who have claimed that he’s either not an American citizen, or perhaps worse, that he’s secretly a Muslim. While this “debate” has only rarely entered the mainstream dialogue (hi, Mr. Trump), it’s been there all along—as of just a couple months ago, a staggering twenty-nine percent of Americans claimed to believe the Muslim part, and twenty percent believed that he was born outside the US. Those aren’t typical “kooky conspiracist” numbers; as of 2013 only eleven percent believed 9/11 was “allowed to happen” and only seven percent believed the moon landing was a hoax. Maybe a lot of them just say they believe these things because they don’t like Obama and haven’t actually devoted mental resources to examining the evidence, but one way or another millions of Americans will go to their graves believing Obama is part of an evil Muslim plot against democracy.

I bring this up because, nothing he can do or say will change that. These people are off the reservation, and if he brings them up publicly at all, it’s to make a fleeting joke about it. But he almost never does, because why waste his time? He’s got bigger things to deal with, and it’s beneath him. Besides which, to simply speak their point of view aloud is to give it a certain amount of credit; to debate it is to concede that there’s a debate to be had, when there absolutely is not.

This is why I think it’s past time for Chuck Wendig to move on from the shitty Aftermath reviews. If you follow him on Twitter, you’ve no doubt seen him post screenshots, on numerous occasions now and sometimes several at a time, of people on Amazon decrying Aftermath for deigning to operate within a GFFA that has a realistic proportion of gay people, and making no Mr. Bones about it.

The sole prior occasion on which a Star Wars novel dared to introduce not just one but multiple gay characters was Karen Traviss’s Sacrifice in 2007. While I can say from personal experience that that wasn’t without controversy at the time, the number of one- and two-star reviews for Sacrifice on Amazon is nowhere near those for Aftermath—and this was the book that killed off Mara Jade. You can’t escape the fact that some portion of the bad reviews are people who are just pissed off about the reboot, and some are people who just earnestly disliked Wendig’s prose style, but I think this unusual concentration of homophobia is specifically due to that increased mainstream attention Star Wars is getting this year; the fandom isn’t more homophobic now (in fact, I’m very confident that it’s less), it’s just that way more homophobes care now.

Partly that’s for the same reasons the rest of us care, but I think it’s also the simple fact that many of these people are trolls. Whatever they may themselves believe, trolls are not out to advance, or even represent, a political ideology; they exist to rile shit up. They feed off of attention, nothing more or less than that. When they’re numerous enough to represent a discrete ideology nevertheless, that ideology deserves to be called out, but I think it’s important to draw a distinction between the beliefs and the individuals. Just holding up a statement of bigotry in front of thousands of people isn’t a critique of its worldview; at best, it’s just comedy.

And that’s okay to an extent—Wendig is nothing if not an entertaining guy, and I’m sure mocking these people is damn near a bodily function at this point. There’s also the fact that he worked hard and wrote a great book that he’s proud of, and when someone attacks that for stupid reasons it’s perfectly reasonable to want to lash out in response. He stated recently that he tweets the reviews not because he’s upset over the criticism, but because it’s “sometimes important to kick over logs and see what squirms underneath”. He’s right, just like it’s important for level-headed Americans to be conscious of the strong currents of racism in our country that lead large groups of people to doubt the president’s heritage. But imagine if Obama himself brought that up, unprompted, once or twice a week? He’d be amplifying them and diminishing himself at the same time. I don’t think it’s helping anything anymore.

A similar lesson can be found in the recent social media kerfuffle over a certain “boycott Star Wars” hashtag, which I’m deliberately not reproducing here in its correct form. As Vox explained perfectly, the boycott “movement” was not earnest political advocacy of any kind, nor was it a movement at all. It was a handful of people who set out to anger lots of progressives and Star Wars fans and got precisely what they wanted.

Were there real racists involved? Yes. Is racism worthy of vocal condemnation? Sure. But I can’t stress this enough: despite being enormously outnumbered ideologically, the people who made that day happen see it as a victory. If we’re going to give this kind of thing any attention at all, what we should be paying attention to is what they actually want: reflexively screaming at racists feels good, and righteous, but what it’s not doing is counter-acting them. If you really care about eliminating destructive behavior, making yourself happy should be less important than making its proponents unhappy—especially when they’re not the same thing.

I don’t think I’ve ever brought this up here before, but I identify as a Taoist. Not in a spiritual sense, but philosophically. The Tao Te Ching speaks of water as a metaphor for how to conduct one’s life in concert with the universe: rather than force itself on its surroundings, water assumes the shape of its container. If you throw a boulder into a river, the water doesn’t ram through the boulder, but without a moment’s cessation, it flows around it. And yet, through erosion, eventually the boulder is eliminated just the same. The water wins in the end, without violating its nature in the process. This is referred to as wei wu wei, or action through inaction.

Another great philosopher once put it a different way: your focus determines your reality. I choose to operate in a reality where racists and homophobes have no place in intelligent discourse and people can disagree without thinking less of one another, because believing that is the only true way to bring it about.

Some might say, well then why talk about this at all? At a glance this piece may appear to be a political screed against political screeds. But what I’m trying to say is that people should think more about the results of their arguments in addition to their rightness. If something a bigot did makes you upset and you want to respond to it, dissociate yourself from that person, take a step or two back rhetorically and talk about bigotry as a whole. Spread your perspective with a crop duster, not a fire hose. Speak not to a person, but to the zeitgeist.

As populous as it is, the internet can feel like a big empty cave if no one is interacting with you; everyone on Twitter has probably had a moment where they posted some clever joke or observation and got kind of bummed out when no one replied or “liked” it—like you might as well have wiped your ass with it for all the impact it made. If that feels bad to a normal person, imagine what it feels like to a troll. If you simply must respond, do so, but always stop and consider whether the person, not the statement, is worth your trouble. You can’t always shove a boulder out of your way, but by sliding right on by, you can always, always, whittle it down a bit.