Friction between characters is effective drama, especially when those characters are ostensibly on the same side. In Rebels most of the friction has been between the characters on opposing sides, like Kallus and Zeb, or of the more playful and familiar sort, like between Ezra and Chopper. In “Homecoming”, we got something new: friction between members of different rebels cells and their different approaches to the war against the Empire.

Of course, the drama was multiplied quite a bit by the fact that the cells involved were led by Hera and her father, Cham, making his return appearance to our screens after The Clone Wars ended. And it was multiplied again as they argued, revealing that, while their philosophies and perspectives on the war were very different, both of them had valid ways of thinking that were based on the same events.

Cham is determined, right from the beginning, to destroy the ship not because it will be a material loss to the Empire, but as a symbol to galvanize the flagging resistance on Ryloth. He’s been deeply wounded by the death of Hera’s mother, obsessed with finishing the battle that she gave her life fighting for, to the point where he has long alienated his daughter. He has the same passion he did in TCW, but his perspective is narrow, he lacked the vision to see the bigger picture of the galaxy around him.

On the other hand, Hera has that perspective. She left Ryloth and her father out of both spite and in search of a new cause, a greater cause, to fight for. She was so bitter at him for his neglect of her after her mother’s death that she even purposely dropped her Twi’lek (read: French) accent in favor of a more generic Rim one. She refused to even speak to him until the needs of the greater Rebellion determined otherwise.

Each of them were so wounded by their parting that their reunion was not a happy one, it was extremely matter-of-fact and professional. Until the differences in their perspectives, in the lessons they had learned all of those years ago, came back to light. Then father and daughter promptly butted heads and fumed at each other, one too stubborn to consider that the other might have learned some things since they had parted, and one not even considering an attempt at reconciliation beyond a courtesy overture.

While Cham’s shortsightedness is meant to be “wrong”, the strength of the episode is that his position isn’t at all unreasonable. He is entirely focused on his own people, on the people that he has spent most of his adult life trying to free. For all he cares, the rest of the galaxy could burn so long as Ryloth might stand free. That’s the war he’s fighting, and that’s the fight so many of his friends, including his wife, have died for over the years. And it clashes with the lessons about unity and greater causes that Hera has been teaching and preaching since her earliest appearance in A New Dawn.

It is a fascinating dynamic to watch unfold. Of course, as the rebellion continues to grow, more friction like this is very much possible. Not all of it will have the same family dynamic, though, and that’s what makes this episode something special. It marries character development to the overall plot of the series and the realities of the show’s era in-universe in a very natural and effective way. “Homecoming” is one of the show’s best episodes purely on the basis that it so perfectly frames the idea of a diverse rebellion made up of beings of all sorts of philosophies and goals, but bases it on characters we know already. And getting to know Hera’s past a bit better (and a bit of Chopper’s as well) is a great cherry on top. 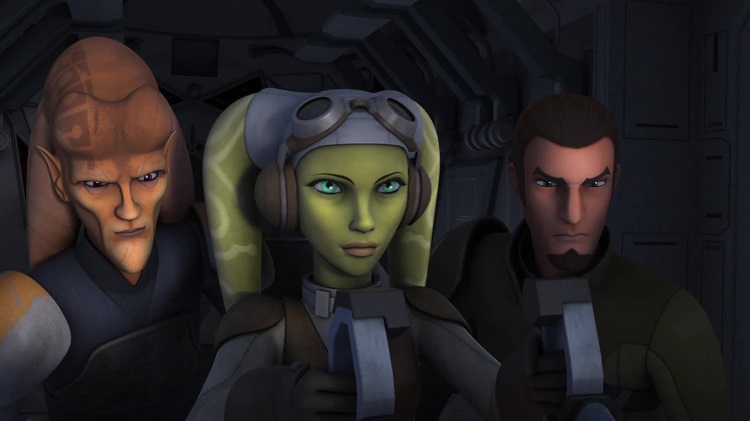 Jay: I don’t have much to add, since Ben has put it rather aptly. But I do have to commend this episode for doing two things:

I. Doing a character development episode while making it an ensemble episode at the same time. I’ve long agitated for more character development episodes, particularly for Hera who appears to get pulled out of the action most of the time. At the same time, ensemble episodes showcase the cast at their best: the Ghost team is amazing when they’re all working together, all parts of a whole. This episode managed to really develop Hera’s character in the way I’ve been dying for the entire show (better, even, than the B-wing episode) without doing so at the expense of the rest of the cast. This approach is ideal and I hope to see more of it in the future, especially as we learn more about Sabine and Zeb in addition to Hera.

II. Complexity to the Rebellion. I’m all about nuance in Star Wars, without jettisoning the good vs. evil narrative in Star Wars. I’ve wanted to see the Rebels struggle a bit with this, and this is one of the first episodes where we’ve seen something like that. As Ben mentioned, Hera’s cooperative, galactic approach to revolution contrasts sharply with Cham’s Ryloth-centric one. These are legitimate differences: Hera has an excellent point that the Empire cannot be brought down unless people think beyond their provincial interests and work for each other, for the greater good. Yet this is at a cost: Ryloth’s revolution may need to be put on hold, and how easy is it to tell them that? Not very — it’s a little easier since Hera is a Twi’lek too, but how much harder would it have been to tell a Sullustan to put her planet on hold for the sake of the galactic good? I’d like to see more along these lines — perhaps an episode where Hera and the Ghost crew struggle with ends-justify-the-means logic, expediency at the cost of their integrity and moral standing, etc.