The constant small threats were actually something I loved. The New Republic didn’t get to be in charge uncontested; there were perpetual former Imperials and other problems. Yes, there were plenty of times when there were stray Imperial warlords behind every single asteroid, waiting to jump out and destroy whatever they ran into. There were some absolutely ludicrous superweapons, and if you didn’t laugh at the progression from World Devastators to Galaxy Gun to Sun Crusher to Darksaber, I don’t believe you. The theme of constant threats to the New Republic, many of which they were unaware of and barely capable of handling, made a lot of sense for a new young government that was trying to pull itself together. It made sense that the Imperial warlords were extremely dangerous for the New Republic; though they had a great many talented military leaders, they had been waging a guerrilla war against the Empire, and now were the ones in control and faced with restoring order as well as handling the last remnants of the Empire. Even the less competent Imperials were still dangerous- the galaxy wasn’t going to change allegiance and fall in love with the New Republic instantly, especially not in areas with strong Imperial loyalty. Imperials weren’t even the only threat, and they weren’t one unified face. We did run into a wide variety of villains from across the galaxy, some of which were more dangerous than others. It kept things interesting. 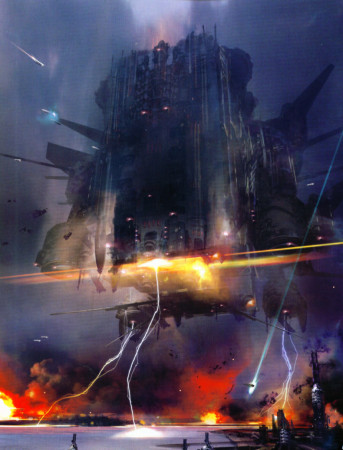 Superweapons are ridiculous. Starkiller Base is truly something else- a whole planet reshaped, able to reach through hyperspace to drain a sun and use that power to blow up an entire solar system? It quite reminds me of the Sun Crusher, even if it doesn’t look like a lost four-sided die that escaped Dungeons and Dragons to destroy stars. Bantam was infested with superweapons, which kept getting more and more ridiculous depending on which author was trying to top which other one. I’ve heard so many comments about how there were altogether too many copies of the Death Star’s plans, based on how often some rogue faction got their hands on one. But this is Star Wars. It doesn’t have to be realistic, and in a galaxy where faster-than-light travel is possible and the first movie in the universe features a weapon that blows up planets, it’s not much of a stretch of the imagination to think that there could be more superweapons out there. We do also see that these superweapons aren’t very practical, and usually don’t work very well as soon as someone finds the small flaw in them. It might be kind of ridiculous as an ongoing theme, but in a galaxy in turmoil, anything can make a good story. So what if there are all sorts of unusual planet- and sun- and everything-destroying weapons! It makes sense with all of the other chaos.

Many of the Bantam novels did a good job of showing that on many planets, the New Republic was fighting an uphill battle to gain the trust of the citizens and prove their legitimacy as the government. We get to see some of the social side of re-establishing a government. This isn’t just about war, but also how war affects all of the characters. Han and Leia have to fit their relationship around trying to rebuild a galaxy and Leia sometimes training to be a Jedi, and Luke gets consumed by trying to find new Jedi to train and frequently fails at dating or doing much other than training Jedi. Jaina, Jacen, and Anakin grow up in a galaxy that is frequently quite unstable, and even refer to being kidnapped as being perfectly normal. The theme of the main characters’ lives being so affected by galactic politics is carried through so well into TFA, just from all of Han and Leia’s little comments to each other. The TFA novelization fills in even more of these gaps, showing that their relationship was very much affected by Leia trying to put the galaxy back together, and fell apart dramatically after Kylo Ren fell to the dark side. Galactic politics aren’t just about the greater story, and seeing what happens to the main characters as a result of politics adds a sort of realism to the galaxy.

This is the good legacy of the Bantam era of publishing- showing a galaxy in turmoil, the main characters’ lives changed and upended by a war, and constant threat from the crumbling but still dangerous Empire. Seeing this theme continued a bit in TFA makes me feel so much better about the future of Star Wars. It still feels so much like the same galaxy, the same one I fell in love with so many years ago. One of my biggest comments on Aftermath was how it felt so much like a 21st-century reimagining of the earliest of the Bantam era, and really bridged the gap between old and new Star Wars. There is good reason to keep this kind of politics in the new Star Wars- it helps so much in the world-building. We don’t need ridiculous superweapons, but they certainly do make for an entertaining story. Starkiller Base was impressive, and made for a good explosion when it was destroyed. Just because something is ridiculous, doesn’t mean it isn’t a good story! And maintaining that feel is all part of the world of Star Wars.

2 thoughts to “Escape Pod: The Feel of the Bantam Era”