First, the elephant in the room – that the New Republic was caught napping by the Starkiller. Would a government set up by those that destroyed Death Stars really be so spectacularly lacking in vigilance? The answer has to be probably not, but what of time eroding that? A decade on, the need to keep an eye out for threats would have reduced – likely certain politicians would be making political capital out of efficiency measures that reduce the spend on such monitoring. Two decades on? The deck tilts further towards no need for it. Add even more years in and…

Yet, if there’s one thing the Clone Wars should have taught the NR it’s the need to keep an eye out for potential enemies, as they only saw the Confederacy of Independent Systems by the time it was an impending onslaught, which in turn opened the door for the Grand Army of the Republic – as if someone planned it – which may be the longer shadow of the Clone Wars, that Sidious manipulated and subverted the entire system with the willing cooperation of those running it! Nor did it stop there: Over the twenty years that led up to the original trilogy, the executive arm of government continued to amass power so that by the time the Death Star was operational the legislative arm, the Galactic Senate, could be disbanded without significant opposition.

So say the Starkiller threat had been spotted? Chances are it would have been deemed dubious, either fraudulent or a coup in the plotting due to Sidious’ pre-Empire activity. 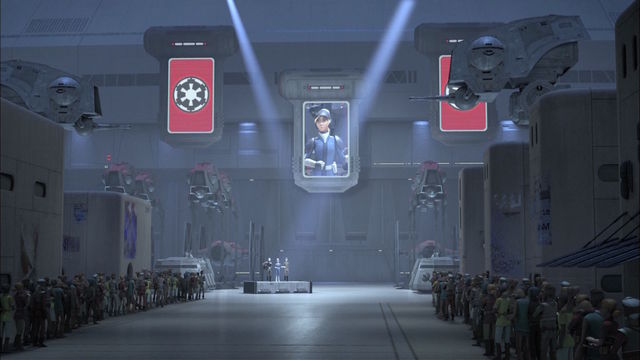 The Clone Wars’ biggest shadow is easily that of the Empire and its toxic legacy to the galaxy. Yes, it collapsed rapidly once its ability to apply coercive force at the galactic level went up in smoke, but it did not come out of nowhere. The genius of the Clone Wars was that they were not only a way of destroying the Jedi, but also a means of subverting and corrupting the galaxy into a pro-Imperial mindset: that all the system needs to work is no opposition or disagreement. Where did that come from? The Old Republic’s inability to operate effectively because it was paralyzed by interminable debate and procrastinating politicians, who were clearly being paid by the hour!

Mon Mothma’s intent to demilitarize the Republic once hostilities with the Empire cease has been damned as fool idealism, but is it? The galactic military was the main tool of Imperial control. It is very likely that once the war with the Empire is won there will indeed be a major rejection of it on a galactic level. So is Mothma really engaging in idealism or a more hard-headed political realism that says the Senate will never back major military funding in peacetime? That’s without adding in that the last time there was a military proposal for the Republic it was put through under the threat of CIS invasion.

In political terms, there’s an odd void in Star Wars. There was the Galactic Senate, with the chancellorship, so that covers the legislature and the executive functions. What of the judiciary? A handful of times Legends did court-martials and other legal processes, but those differ from the role of the highest level court, which has the ability to adjust the law. If there was such a court, it is certain that Sidious would have acted to liquidate or curtail it. Should there be such a court in the New Republic? Absolutely. The concept of a judiciary able to amend or even strike down unjust laws recognizes there must be limits to what the other arms of government can do. That there are matters that should not be dictated to by elections and popularity alone, there needs to be an impartial body that sits outside of the party political structures. Yet even if Mothma proposed such, it is likely that Sidious’s shadow would still taint it.

What then is the solution in the face of this all-encompassing and total corruption by the Empire that the Clone Wars spawned? Too often people set up the good and the perfect as enemies; it is not sufficient to have something that is merely better than what came before, it must be perfect. In the face of the wounds inflicted, just bandaging will suffice and may have to do for years. Might that in time see the wounds heal? Hard to say – those wounds were accrued over decades, it may require the same for their healing. In most cases, however, the patient has to work towards their recovery and wish to be better. Is this the case for the SW galaxy? Of this, I’m skeptical.

There’s a reason Harry Truman’s use of ‘the buck stops here’ stood out and still resonates across the decades. The reason is it rarely ever happens, especially in politics. The more unpalatable truth, however, is that yes, we do get the politics we deserve because who votes the politicians in? One of the aspects of representative democracy that has been diminished over the years is that representative element. Not least as being representative of people means decisions are made on their behalf, which in turns carries with it a degree of responsibility. This is why the line ‘I didn’t vote for the bastard’ will sometimes be used, for people wish to disavow themselves of that electoral responsibility.

One of the most interesting and sadly too quickly ended plots in Destiny’s Way, a late New Jedi Order book, was around senators known to have flouted their responsibilities and betrayed their constituents. Unfortunately, the plot strand never went anywhere and it should have. What happens when that political contract breaks down? It tends to be messy and violent. (Can that be warranted? Depending on the details, but that’s a separate can of worms.) It is to the benefit of those who game the systems that those who vote do so from a position of information asymmetry, where the politician knows more than those voting.

As a certain infamous politician and later dictator once put it: What is to be done? Perhaps the only solution is a recognition that matters are indeed at rock bottom, that the systems were irrevocably abused, tainted and wrecked. Why does this matter? Because once that recognition is done, activity can move to clearing away the wreckage and work can then start on something new. If nothing else, doing something beats doing nothing.

3 thoughts to “The Shadows of the Clone Wars”