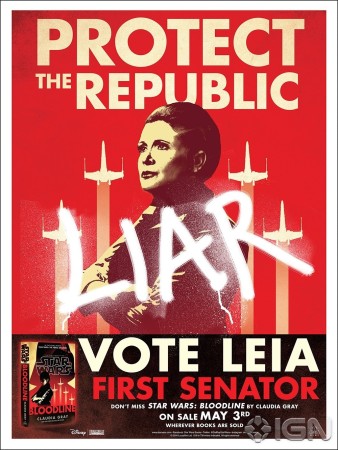 I know I’ve been on something of a hiatus from Star Wars fandom, which to me seems odd. This is my second-oldest fandom, and no matter how many times I’ve walked away, I’ve always come back. However, something put me on a vague hiatus; I’ve always been a post-Return of the Jedi Legends fan first and foremost, and finding something to keep me going in a time of little post-ROTJ content was difficult. And suddenly, I was back in my old familiar territory. The very language of Bloodline really got me interested, and I felt like I was back with the books that I’d read under the desk in middle school English classes. I missed the New Republic of the Bantam era- the newness of a galactic government that was already miring itself in bureaucracy, the cautious attempts at setting a precedent and acting confident when they were still nervous, not knowing who was truly friend or foe, the constant shadow of the old Empire and the struggle to face its legacy. This was something I was missing dearly, and something that brought me into Aftermath so thoroughly.

Tone and theme are two things that I’ve noticed will really make or break my experience in a Star Wars book. I’m no literary critic, and in all honesty, English was consistently my worst subject in school. However, the very feel of a book and the major plot themes are the things that’ll make me forgive many other issues, or make me not able to finish a book that should otherwise be right up my alley. For Star Wars, the small details that build a galaxy are often the things that make the story. Running into alien species we know well and a myriad of new ones, being given the word pictures to make ever-busy Coruscant come to life, everyday objects that have been given the GFFA twist- the little parts of a story often are some of the most vital. Bloodline perfectly captures so much of the feel of Star Wars that drew me in, simply in world-building.

World-building in Star Wars is a rather odd challenge. On the one hand, there are so many things about the GFFA that are very well defined. On the other, six years before TFA is functionally a completely blank slate. We know something of TFA’s political situation, but there are still so many important unknowns. For that matter, Bloodline being set on Hosnian Prime, and that being the new center of government, is a change that still feels familiar. Though Hosnian Prime is a new planet, it feels like it has much of Coruscant’s hustle and bustle, and the New Republic government feels like it’s settled in well enough that it could have been there for many previous years. The choice of making the Empire both a distant memory and altogether too close actually fits in very well. It seemed odd that the Empire is far enough away that many of the young Senators really can’t remember much of it, and that Imperial relicts are something of collectors’ items. However, it makes sense when we start to realize the scale of Imperial domination, how so many citizens probably didn’t know much about the war, and how many young people have risen to prominence after a war that killed many older politicians. The generational difference between those who fought against the Empire, and those who didn’t, is blatant and adds an interesting layer to the political setting. In the past, we’ve always had prominent political and military figures who fought in the Galactic Civil War, or who were close enough to the war that they remember it. It took a very long time to develop characters who had little to no memory of the Empire, and seeing that occur made me realize how significant the time jump really has been. The Empire’s shadow is now viewed very differently than it had been in the Legends-verse, and we really don’t realize how dangerous Imperial sympathizers are until we find out about the First Order that’s starting to come together. All of these details, the changes to the post-ROTJ galaxy that we used to have, make for a compelling story. I realized that as I was reading, I was making notes about the book, and not just for the sake of article-writing. I was also trying to keep track of plot points and changes between old and new canon, realizing just how different the GFFA was- and how much it was still the same.

The ensemble cast was another element that felt both much the same and completely reimagined for the new Star Wars. Yes, the ensemble is definitely much more diverse. When the Legends announcement was made, one of my thoughts was “I hope they give us more diversity.” And yes, we’re getting it! There are clearly nonwhite characters, there are plenty of women, the book passes the Bechdel Test very quickly, and the very casualness of mentioning same-sex relationships reaffirms that the new Star Wars is committed to diversity. We even find out that Greer left piloting due to a chronic illness, and that little note is one more form of representation for those of us who have chronic health issues. I’ve been rather reluctant to divide Star Wars into “old” and “new,” but for the sake of diversity, I have to. We are finally seeing consistently diverse ensemble casts, and it isn’t diversity for the sake of diversity. It’s making ensemble casts who are a wide variety of people, and making it completely normal. This is such a refreshing change, and brings a great feeling to a universe that has definitely had issues with diversity in the past.

Bloodline was the book that I knew I’d fall in love with, but didn’t realize to what extent. I’m so deeply an old Legends fan that reading a new reimagining of the kind of political intrigue I love, was something that I’d been craving for a while. I feel like I’m back in the old familiar GFFA, reinvented for a new generation of Star Wars. It doesn’t have to consistently be the same universe; it can evolve, and it has done so nicely. An intensely complex plot, woven together so well, flows perfectly and makes for a very compelling read. I finished this book in one sitting, and in all honesty, it’s probably going to take a couple of re-reads before I feel like I’ve really found every last detail. As far as I’m concerned, that’s something that really makes for a good book.