“Darth Vader is your grandfather.”

There’s no easy way to tell someone that they’re related to one of the most evil men in history, no pleasant way to share information that will shake them to the core. The best thing to do is be upfront, be honest and be willing to talk about it, but Han and Leia did none of these things with their son, Ben Solo. Leia waited for years hoping that the opportunity to tell Ben of his lineage would present itself, undoubtedly keeping it a secret to protect him from the pain it would cause. Unfortunately there’s no such thing as the right time to tell someone their grandfather slaughtered little children and became a monster.

However, Leia’s efforts to find the perfect moment were taken away when her political opponents publicly exposed her relationship to Darth Vader in an effort to ruin her chances of overseeing the New Republic. While they succeeded in preventing her from taking power, what they could not predict was the side effect the news would have on her son. This revelation was potentially the moment that started Ben down the path to fill the void left by Vader’s death.

To understand why Ben was willing to join Snoke we need to look back at a few factors of his life prior to The Force Awakens, some which have been revealed and others we need to deduce from common human behavior. The first thing to examine is Ben’s relationship with the Force. Pablo Hidalgo states in The Force Awakens Visual Dictionary that there is something about Ben that makes Snoke believe he is “the ideal embodiment of the Force, a focal point of both light and dark side ability”. This is not some sort of prophecy like with Anakin Skywalker, but the natural way Ben is connected to the Force. Snoke was able to feel this power in Ben from a very young age and as a result started to pull him towards the dark side early on.

Leia was able to sense what Snoke was doing which led her to send Ben to train as a Jedi with Luke. Her reaction to Snoke’s interference was a logical step since neither Leia nor Han would be able to guide Ben in the right direction to help him focus on the light side. We still have not learned exactly how old Ben was when he joined Luke, but we can assume he was already old enough to have established a relationship with his parents. While the idea of training with Luke might have been exciting for Ben at first, the time he spent with his parents exposed him to one of the fatal flaws of the Jedi: attachment.

We know that Leia became a career politician after the Rebellion and that is where she focused her time and efforts. Han, after freeing Kashyyyk, had no such obligations when Ben was born. While Han clearly loves flying the Falcon around the galaxy, I don’t think anyone would doubt that he loves his family more. He is fiercely loyal and caring so I believe it’s safe to say he was very present and close to young Ben.

Leaving to become a Jedi meant Ben needed to walk away from his parents, but unlike the Jedi from the Old Republic, he would still have contact with them. Regardless of the friends he would make at the new Jedi temple, Ben would miss his parents like any normal child would.

As he grew older the time away from his parents would grow into resentment. Why wouldn’t they come to see him more? Why were they so hard to contact? Han had become a famous racer and Leia was still a visible politician so while they had time to do those things it likely resulted in visits to their son being few and far between. Master Luke would eventually start to look more like a babysitter and not a teacher. Even if Luke were to rationalize the reasons why they were not able to see him, Ben would still hold a bit of a grudge. But there is more to his emotions than common teenage angst; Snoke continued to pull at him from the dark side.

Snoke, knowing that the dark side was strong in the Skywalker bloodline, would likely attempt to keep a certain level of darkness present within Ben to constantly gnaw at him, the invisible fingers of the dark side pulling at his mind since he was a child. Of course without knowing his family’s history Ben would see this as a weakness that is unique to him. His uncle, a master Jedi, and his mother, a beacon of light and strength in the New Republic, were able to beat the Empire and never be tempted by the dark side. So why him? The unfortunate conclusion Ben probably makes is that he is broken, undeserving to be a Jedi if he is tempted by the darkness. Without knowing the entire truth Ben was always going to be at a disadvantage on his path to becoming a Jedi. 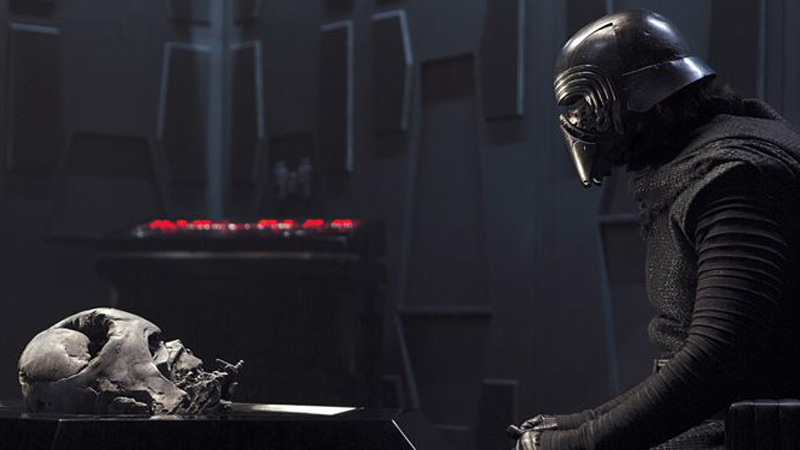 Once the secret is exposed, twenty-three years of pent up confusion and doubt finally make sense to Ben. Only negative thoughts could follow such a shocking revelation:

And, like his grandfather before becoming Darth Vader, Ben comes to a similar conclusion:

“I know there are things about the Force they’re not telling me.”

Having spent years manipulating the Force around Ben, Snoke would know this was the perfect time to seduce him to the dark side. After learning that everyone in his life had lied to him Snoke would be the first person to give voice to what Ben now realizes: Ben Solo has never been broken, just misled and deceived by those he loved.

Once it has reached this point there is nothing left for Luke, Leia and Han to tell Ben that could fix the situation. Snoke, while clearly an agent of the dark side, becomes the teacher that Ben feels that he can trust. When Ben takes the name Kylo Ren there is no more reasoning with him. He now feels whole, like he has a purpose and an identity of his own. He now has an idol in Vader, both men having felt slighted and betrayed by those around them.

Luke and Leia may have stopped Darth Vader but they also inadvertently created his replacement when they decided Ben Solo was not strong enough to know the truth of his family.

4 thoughts to “Torn Apart: The Predictable Downfall of Ben Solo”