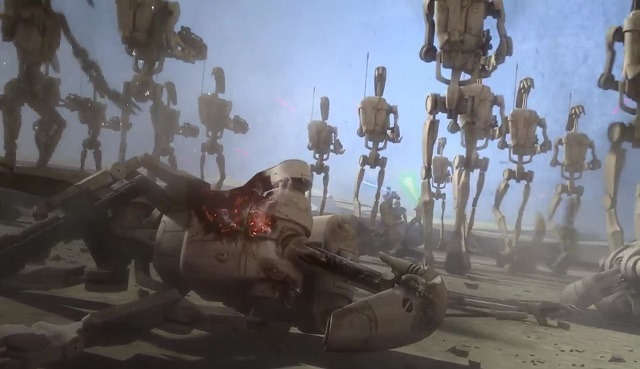 We’ve brought up The Clone Wars a lot in this column as we’ve discussed Rebels, both because it’s the latter’s direct predecessor in terms of production, and also because Rebels itself has featured the characters and events carried over from its own series quite a number of times. But Rebels has also done something in relation to TCW that sequels often do: a better job of explaining, extrapolating and summarizing their predecessor than the original work itself ever did.

The Clone Wars was a scattered show in terms of its plot and tone, as often happens to shows with long runtimes. But even as long as it did last, TCW still felt like it was cut short, leaving many running plots unresolved and some characters in limbo. While some of the stories ended on perfectly acceptable notes (Ahsoka leaving the Jedi, Maul’s insurrection being ended) those were not the last installments the TCW team had planned to tell about them. Each story had more to go, and that was evident before and after the show’s actual cancellation.

Rebels is doing its part, not to replace those stories that would have happened if the show had not been cancelled, but to be a proper sequel series that would exist no matter how long TCW itself had run. What “The Last Battle” is meant to show isn’t the end of the Clone Wars, the actual war itself ended well over a decade before when Order 66 came down and the droid army was deactivated. This episode shows us (and Ezra) what scars were left behind by that war, and lets us see it with the benefit of hindsight.

Let’s get something straight: Ezra didn’t “end the Clone Wars” with his deduction of the Empire being the only winner any more than Ahsoka defeated Darth Vader by realizing that he was Anakin Skywalker. All Ezra did was convince two old soldiers that their war had been over for a long time and that the classic droid versus clones conflict that formed so much of it was ultimately pointless. The war was never about them.

Kalani and his droid soldiers, just like Rex and his clone brothers, were pawns in a proxy war that was waged through the machinations of the Sith. Of course, that fact is beyond Ezra’s reckoning, but he does know that the Empire rose to power once the Republic fell. The Jedi are gone, the clones are gone and the Separatists are shoot-on-sight for stormtroopers, even from the most backwater garrisons. The only major power left in the galaxy, and the one that has largely defined itself on its pledge of security and order, is the Empire. 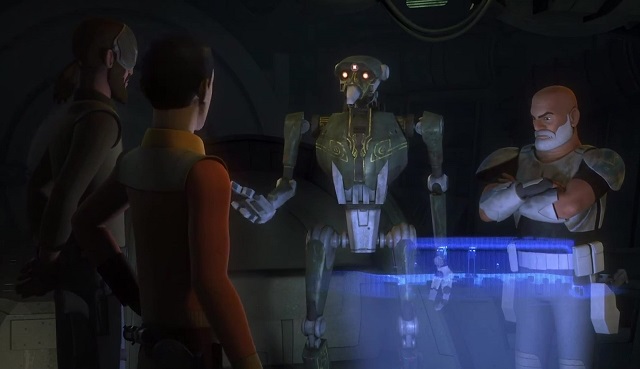 Both Kalani and Rex are trapped by the specters of the past, engineered to fight in a very specific sort of war. And the conclusion of the war was so sudden, so anticlimactic, that they were left with nothing. Not with a bang, as the saying goes, but with a whimper. In a meta sense, they’re a lot like fans of The Clone Wars (the show) after its cancellation—strung along for years and then cut off with the ending just coming into sight.

If we step back and look at the bigger picture of the show as a whole, the war itself was never the point. Battles are fought, planets are won and lost, and people die. And for what? The conflict in “The Last Battle” shows us that, for all of its familiar tropes of unstoppable Jedi with loyal clones at their side against hapless battle droids, all that mattered were a few select characters who we watched, warped and affected though they were by the ferocious meat grinder of war. The battles themselves were a lot of pointless flash and noise fought for the entertainment of those privy to the meta events: the Sith, and the audience. In the end, The Clone Wars (both the show and the event itself) was about the characters, about Anakin and Obi-Wan, Ahsoka, Ventress, Yoda, Maul, and yes, about Rex.

There’s something rather profound about being able to look back at a show like TCW from an authorial standpoint and see it as ultimately pointless. The farther out we zoom, the less and less important things seem to be. There are important tidbits here and there, to be sure, such as Ahsoka leaving the Order and surviving the war to ultimately become Fulcrum. But the events of the show itself don’t matter nearly as much as their effects on the characters within it do, because so much of it was being planned by people with a much wider perspective of the events unfolding than most of those same characters. (Are we talking about Palpatine, or are we talking about Dave Filoni, Henry Gilroy and George Lucas?)

It’s a commentary on the war as well as the show that documented much of it. The ending of it was set in stone: Palpatine would triumph, the Jedi Order would be destroyed, and a new hope would ultimately rise some twenty years later. Certain characters would live no matter what since their fates were already depicted later on. Nothing would happen to them in the years before Revenge of the Sith make that much of a difference except in the status and perception of their character. Rebels is fast going to run into the same problem as it runs up against the events of the films, but that’s the benefit of having a mostly original cast: not nearly as much is left set in stone.

“The Last Battle” helps to unite old foes together to fight a new war. It also continues the work that the second season of Rebels as a whole did in order to better unite its fans with the fans of TCW. Like many of the best sequels made across media, Rebels is giving the characters and themes of TCW a coda, one last piece to play before they are moved off of the stage and leave the next generation of heroes and villains to take up the mantle for themselves.

One thought to “Rebels Revisited: The Last Battle Piece”