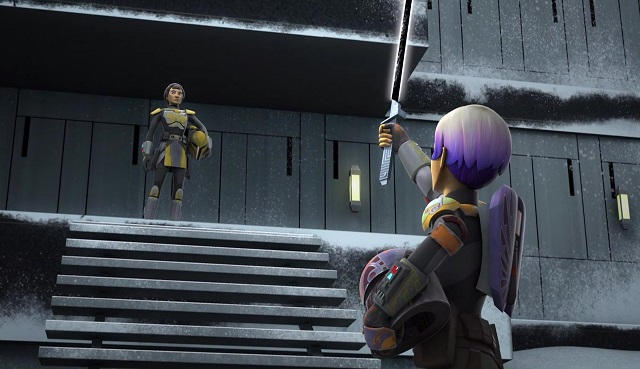 Jango was an orphan, and his son Boba was a clone that he had grown in a vat. His reasons for doing so were left mostly ambiguous, but the inference is clear from the supplementary material: Jango wanted someone to continue his legacy, to carry forward his family’s name. And it was around this time that an author named Karen Traviss first entered the scene. 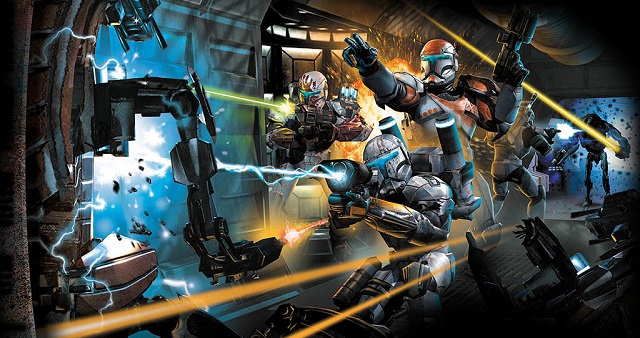 Traviss’s first book for Star Wars, Republic Commando, was a tie-in book to a video game that was short and small in scope, and offered our first look into what would become a long definitive take on the Mandalorian culture. Traviss would go on to write more books in the same series and moved the focus off of the clones and onto the Mandalorians who trained them. She fleshed out a lot of what had been touched on previously about Mandalorian culture, including their varying factions and their code of honor, the importance they placed on family, and she gave them a language, Mando’a, which originally started as a way for her to obscure the sort of language that you might hear around a British Army base, but would not fit in the Galaxy Far Far Away.

For a long time, Traviss’ take on the Mandalorians was the definitive one. The fandom around her books exploded, fan groups like the Mando Mercs started up (or grew in size x10), and calls for the culture to be depicted in other places like TV and comics grew exponentially. If Mandalorians were depicted in any form, be it in fan-made content or official media, they were inevitably measured against Traviss’s work. The Mandalorians that she presented were a rustic, rugged culture of tough men and women who strove to be self-sufficient and self-governing, placing far more importance on their clan and family than the governments that happened to be ruling at the time.

Then, The Clone Wars started airing. In its second season, we were given our first look at Mandalorian culture through the filter of George Lucas’s ideas: a society striving to remain neutral in the war and currently being ruled by a staunch pacifist who considered the warrior past of their culture an embarrassment. Shortly thereafter, for contractual reasons, Traviss stopped working on Star Wars books. While ostensibly it did not have anything to do with the vast difference in portrayals of a culture that were somehow supposed to take place around the same time, it’s not hard to read that into the chain of events that led to her departure to other franchise tie-in work.

TCW’s portrayal of the Mandalorian culture was a stark outlier to how it was envisioned just about everywhere else, at least when it initially debuted. They had very formal, cubist architecture instead of rustic huts and homes. They all lived in massive domed cities instead of on farms. Clans were no longer family units, instead becoming political groups that dictated affiliations. Even Mandalore the planet was different, a wasteland of glass and sand littered with craters from long forgotten battles instead of the diverse jungle it was before. Needless to say, fans of the culture Traviss had helped codify were not pleased. The casting of the few Mandalorians who sought to restore their culture to the old ways as the undisputed villains of the piece did not help. But TCW did have something of a plan in place for the long-term depiction of the culture, one that really only came into focus as the series was reaching the end of its fifth season. Through the show’s run we witnessed the slow disintegration of the “New Mandalorian” movement, and “The Lawless” brought us the death of its leader while the different warrior factions that sought to fill the power vacuum ignited a civil war. 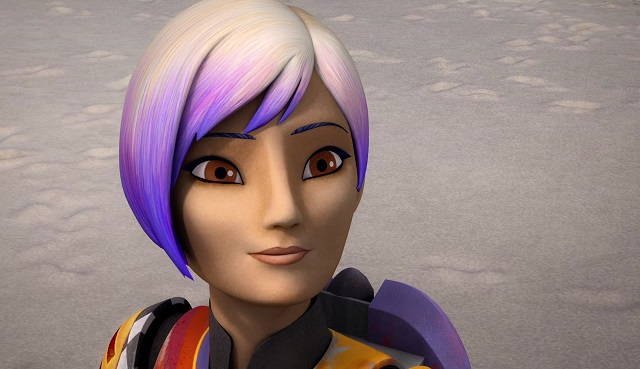 After that, though, there was nothing. TCW ended with its fifth season, Traviss was long gone, and the appearances of Mandalorians became basically non-existent as Star Wars entered the post-Lucas era. Until Rebels came along that is, and introduced the world to Sabine Wren, a core cast member and the only the second main female Mandalorian ever depicted on-screen, after Bo-Katan. Each season of the show has explored a bit more of her character and showed a bit more of what happened to her culture and society in the wake of TCW. We met Fenn Rau and his Protectors in the second season, and early in the third we saw the Imperial-backed ruling faction led by Gar Saxon wipe out those same Protectors in the Empire’s name. Now, as the season starts building toward its finale, we have a look at the Rebels-era “typical” Mandalorians and our formal introduction to Clan Wren.

“Legacy of Mandalore” is a perfect, almost brilliant marriage of the two different portrayals of Mandalorian culture. We see and hear a bit of what happened after TCW’s conclusion, but also move the overall portrayal of the culture far closer to the Traviss-era version. The Wren family home has the same sort of cubist architecture that the TCW depiction had, but Sabine and her kin speak Mando’a to each other; they respect Maul and the Darksaber, but still know Jedi on sight and threaten them; and especially importantly: a clan is a political faction, but it is also a family. The fact that the two different facets of the culture now exist side-by-side actually adds a new layer of depth to the Mandalorians as a whole that makes the story that much more interesting.

A great illustration of this new duality is actually a person: Ursa Wren, Sabine’s mother. The Countess of Clan Wren is the ruler of Krownest, but her authority is all but nil as the actual ruler of her people, the Empire, hold her husband hostage to ensure she is content to sit on her secluded colony world and not make a fuss. She tries to keep her clan together by playing along, not an easy thing to do when Sabine was at least partially responsible for developing something that proved a great service in helping the Empire quash resistance among the other clans. Ursa allows her son to join Saxon’s Super Commandos in an attempt to restore a bit of their status while otherwise keeping her head down, trying to remain neutral just as Duchess Satine did but for very different reasons.

Then her daughter returns after years spent on the run, bringing an ancient symbol of power with her, and starts spitting rhetoric about how Mandalore needs to be free again.

Ursa is left in a terrible bind. On the one hand, all of her work trying to keep her clan together and alive is threatened by the return of someone both the Empire and the other clans see as a traitor, and by the Darksaber’s reemergence. On the other hand, her daughter has come back home and, either purposely or inadvertently, put herself in tremendous danger. Caught between loyalty to her clan and love for her daughter, she lashes out at Sabine when she appears before her, and repeatedly tells her that coming back was a mistake, but ultimately makes a deal with Gar Saxon to try and keep her alive even if it means handing him the Darksaber and two Jedi on a platter. Of course, once Saxon proves that his honor only stretches as far as it conveniences him, she turns on him to save her family, even if it means the bringing chaos back to Mandalore as a whole.

When it comes down to her having to choose between saving her clan’s status and saving her daughter, Ursa tries to break the mold, tries to find a third option, refusing to surrender either one. Ultimately, she does find that option, just not in a way she had anticipated, and her killing Gar Saxon will inevitably send shockwaves through their sector of space. But an option that never once crossed her mind is to simply surrender, to let her clan be absorbed by the Empire as others have. Even her son has had loyalty to their family so drilled into him that, when forced to choose between serving Saxon and living to fight another day, or dying with his family and the rest of their clan, he willingly turns his blaster against his former comrades. The clan comes first.

While it’s doubtful that Karen Traviss will ever come back to the franchise at this point, the fact that her version of Mando’a is still in use speaks to the willingness of the Rebels writing team to draw from all versions of the culture to fill the best toolbox for their story. Where Mandalorian culture will ultimately go from here is something that we will have to wait and see. But the promise of storytelling potential is tantalizing as we unpack what happens to a warrior culture under Imperial rule, as well as seeing how the two very different schools of thought that exist in their cultural portrayal continue to mesh and clash.