It’s odd to think that, with the wealth of material that has come out recently for Star Wars, how little we’ve had that covers those in the Empire. Parts of Lost Stars, parts of Twilight Company, the Darth Vader comic, and that’s all I can think of off the top of my head. Legends gave rise to plenty of these sorts of stories that trickled in over time, but the new canon has been a lot more reluctant to give us a sort of “day in the life” story of the most clearly identified antagonists in the saga.

That is, until this week’s episode of Rebels. While not a typical Imperial-centric story, since it’s long been evident that his-first-name-is-Agent Kallus is a turncoat, a traitor to the Empire he once tried to uphold. But narratively, this is the first episode of this series that follows someone other than one of the members of the Ghost crew. As it opens with the POV shot of Kallus waking up in his bunkroom, alerted by the sounds of sirens, this is a different and daring sort of step for the show to take.

We get to see a very different perspective on a lot of things, and by things I mostly mean people. Kallus has a very professional and courteous relationship with most of the other officers around him, but even interactions on that level are far different from the orders being barked and blasters being fired that we usually see. We see the young and eager Lieutenant Lyste almost bounce in anticipation as he and Kallus are called before Thrawn, so eager to please that he makes some rather foolish decisions that have some rather long-running ramifications.

But the change of perspective also gives us a good look at the different sorts of people who serve the Empire and their motivations, even in brief. Lyste is obviously looking to rise through the ranks, hoping for power and prestige by following whatever orders he is given. Pryce and Thrawn are looking at a bigger picture, hoping to put the problem of the Fulcrum agent in their midst behind them so they can focus on more important matters, like finding and crushing the Rebel fleet. And we also get our first look at Colonel Yularen’s point of view, where he serves to uphold the same government he fought to preserve in the Clone Wars, only now he searches for threats that exist within instead of fighting against those without. 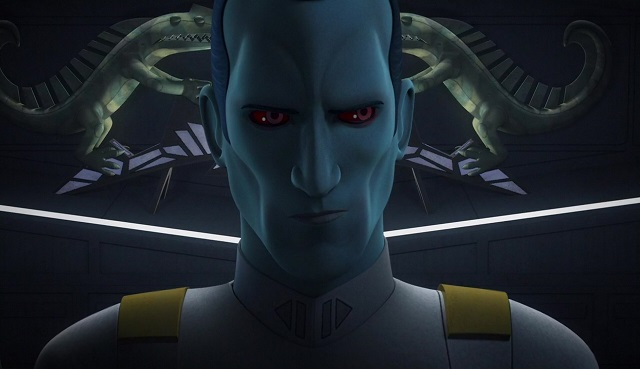 Through the lens we have, of Kallus’ perspective, people like Yularen and Thrawn are that much more threatening, intelligent and experienced and actively searching for whoever is leaking information to the rebels. As dangerous as they are to the Ghost’s crew, they are also threats to those within the Imperials ranks who work to subvert the Imperial cause. While Kallus shouldn’t expect anything less, this is probably the first time the magnitude of his treason has hit home. The head of the Imperial Security Bureau, his instructor at the Academy, is now actively hunting for him and will have him executed for treason if he succeeds.

When Kallus meets Ezra, he’s given the exact ticket out that he needs so desperately without even knowing it at the time. It seems the Force is looking out for him. But in the end, even after everything falls his way so that he can frame Lyste for his illicit activities, get the rebels the clearance codes they need, and even alter Thrawn’s map data to hide the location of the Rebel base, he decides to push his luck. Perhaps it will be to his end, perhaps not, but the roll of the dice is one too many for his cover to withstand. Thrawn likely had suspicions before, but now he has certainty, and whatever Kallus feeds to the rebels moving forward will be exactly what Thrawn wants them to know.

That’s something else we get to see in this episode that we did not have before: a more inside look at Thrawn’s genius deductions, as well as his own training regimen, keeping his body as sharp as his mind to put it more poetically. While Pryce, Yularen and the others are competent, intelligent officers who each have their own strengths and specialties, Thrawn is patient, logical, and observant to sources of information that most in the Empire would dismiss. That is part of why Kallus’s ruse comes apart at last: if it were just Yularen or Lyste or another typical Imperial officer working against him, he may have gotten away. But he is up against someone who does not think like the typical Imperial officer.

Our new perspective for this episode gave us a much greater idea of exactly what the rebels are up against, on every level rather than just the rank-and-file sector commanders they have faced before, and who we see walking stone-faced from Thrawn’s interrogation. Through Kallus’s eyes, the determination and threat of the Empire comes full circle. These sorts of people are the ones that Kallus once admired, trained with, learned from, and still works alongside. And now, they’re the people he is working to undercut and overthrow, and who, if they knew what he has done, would without hesitation kill him where he stood.