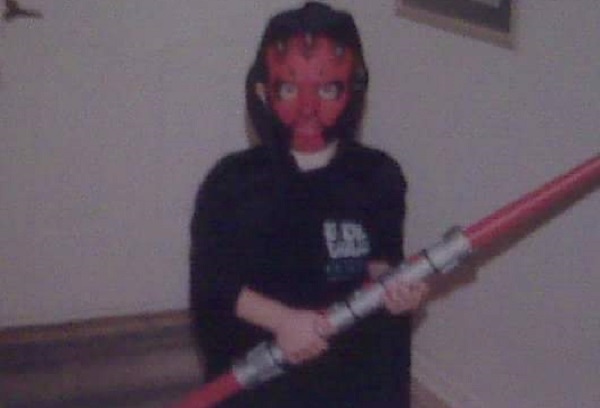 When I woke up this morning, I tossed aside my A New Hope-themed comforter. In the shower, I lathered up with Suave for Kids – hey, it was my only option for finding shampoo with Kylo Ren on it, isn’t it? Before leaving for the morning, I brushed my teeth with Colgate for Kids featuring Rey and BB-8. As the 40th Anniversary of Star Wars approaches, I thought it would be appropriate to reflect on what the franchise means for me – and what it can mean for others.

One of the most powerful aspects of literature, in my mind, is its ability to be pedagogical. That is, fiction can teach us and change us. No fiction has shaped my life as utterly as the Star Wars franchise has. There are times I wonder what kind of person I would be if I had never seen Star Wars. Asking this aloud prompted my roommate to note that I wouldn’t have any t-shirts, at least.

But I think there are a few other ways it has taught me and changed me. First, Star Wars taught me that ordinary people can do great things. Growing up, I wasn’t really the most confident person. I wasn’t the best looking, nor did I really apply myself to my grades as much as I could have. I wasn’t good at sports, and I needed remedial band practice between regular band practices. I think this caused a lot of existential despair in me, for a long time.

But something about Luke Skywalker’s story touched me. He was a simple farmer with a bit of wanderlust, waiting to leave the doldrums of life to become a pilot. Watching him become a great knight told me that I could eventually become a great person, too. As he became more confident, I would, too. Seeing him take on Vader at the end of Return of the Jedi, turning from a farmer to a Jedi, solidified his position as a role model of sorts for me. Instead of thinking about the ordinary Chris I was, I could think about the potential for greatness I had in me.

Being a Star Wars fan, I learned about found family and being there for my friends. I am a naturally selfish person: the money I make is for me, the things I own are for my benefit. It is hard for me to come outside of myself and think of the other. One of the biggest lessons I learned early on watching Star Wars was how important it was to care for your friends, and not just look out for yourself.

Again, Luke was a big factor in learning this lesson. On Dagobah, Luke had the chance to train under former Grand Master Yoda. He had the best chance to grow in the Jedi ways, becoming powerful enough to destroy Vader and Palpatine. But, upon learning that his friends were in trouble, he gave it up. He instead rushed to their aid, hoping to save them and free them from the Empire. Han was the second biggest influence in this. Starting as a self-concerned smuggler, Han was ready to leave the Rebellion after leaving Luke and Leia on Yavin 4. What a change it was, by the end of the original trilogy, to find Han leading the assault on the shield generator on the forest moon of Endor!

Seeing these two come outside of themselves, eschewing what was most important for them, taught me how to love others better. Time I could have spent reading the new Legacy of the Force series was better spent serving pancakes at the school down the street with astronomical suicide rates. I was able to serve in lower-income areas through some programs in my school. I’m not sure, at the time, that I would have done any of that without Luke and Han’s examples.

But finally, Star Wars taught me about the importance of love. As I was picked on, it was hard not to be angry. Some would even say it was mostly justified! But dwelling on that anger can hardly be good for anybody. It prompts us to think about revenge, and we never stop thinking about ourselves as the victim. It reminds me of a commonly-repeated saying of indeterminate origin: “resentment is like drinking poison and hoping the other person dies.”

If anybody had reason to be bitter, it was Luke. The Empire came to his house, burned it down, and charred his aunt and uncle to a crisp. They killed his friends. They, led by Darth Vader, eventually held his friends hostage and tortured them. But, when facing both Vader and the Emperor over Endor, Luke does not give in to his anger and seek revenge. No, it is not the Jedi way. Rather, he sees the humanity of Darth Vader, or Anakin Skywalker, and seeks only his redemption. It is witnessing Luke’s display of humanity that Vader turns against Palpatine, sacrificing himself for the good of the galaxy at large.

Seeing this story, about how even our enemies are human, has helped me let go of a lot of the bitterness I’ve held on to for so long. I wouldn’t say Star Wars was the single cause of my ability to let go, but it would be a mistake to say that it wasn’t a huge factor.

Not everybody learns the same thing from watching the movies. I think with eight films, hundreds of novels, and Waru knows how many comics out there, there are so many lessons to be learned. This is part of the reason I love Star Wars. There is always something for everybody, and there are a lot of different lessons that people can learn. Star Wars comes into people’s lives at a lot of different times and places, touching them in many different ways.

This is why I am even more excited for the next ten or, who knows, forty years of future material! No matter where I turned in Star Wars, I was able to see somebody who looked like me. Luke was a white male like I am; similarly, Jacen (leading the novels) and Anakin (leading the prequel-era comics) also looked like me. I never had to stretch my imagination too far to find someone to whom I could relate.

Until now, I’m not sure that option was always entirely available for women and people of color. The original trilogy and Expanded Universe generations had Leia and Mara and Jaina as main female characters, and later Padmé and Ahsoka came around. As for people of color…well, they had Lando and Mace, right? Now, little girls can see themselves leading two movies (so far) in Rey and Jyn, and young fans of color have Finn and Poe, and virtually the entire main cast of Rogue One.

I already know how much Rey has taught me. I relate to her isolation in a lot of ways. I would wait for other people to text me. I think women in the fandom can find themselves in similar isolated circumstances. It can be hard to feel truly at home as we men do our best to push them out, complaining about female leads in video games and movies. When Rey grabbed the lightsaber, I was flooded with emotions. Suddenly, the isolated one was brought into the story of the Skywalker family. Then I had a more poignant thought: I wondered what this meant for women. What did they see represented in that moment? Hearing reactions to this scene from women only bolstered my love for the film even more.

But this isn’t just about diversity. Part of the reason I am excited for the next stage of Star Wars is the many new lessons diversity can open for us all. Women are, inevitably, going to experience the world differently than I am. People of color will have vastly different situations and contexts than I will, which will cause them to look for different things out of the saga than I do. This will help expand both my love for the saga and my mind, and how I see the world.

So, looking back on my experience with Star Wars, I am excited for the forty years that I have been able to celebrate and learn from. Looking forward, I am excited to see another forty years of lessons more broadly available for anybody, no matter who they are.