The Lucasfilm Publishing panel ended with a surprise series of announcements, the biggest being the Journey to The Last Jedi books. The Del Rey novel, Phasma, made a particular splash. This one is particularly exciting not just because the First Order is still a mystery, but because Phasma in particular is an unknown quantity. Considering that Delilah Dawson made Bazine Netal, a single-line character in The Force Awakens, come across as a fascinating and developed character in the span of a single short story, we should all look forward to what she can do for Phasma with a whole novel to work with. Her praise of Matthew Stover’s Heroes Die — one of my favorite books ever — can only enhance my anticipation for this book. 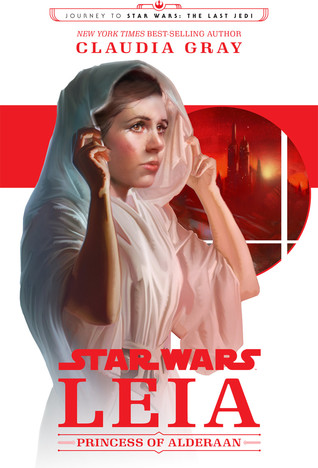 But speaking of anticipation, I got something that I’ve been clamoring for for quite a while: a Leia young adult novel that covers her pre-A New Hope story. This was probably my #1 most desired book, and there was a very short list of authors who I would trust to write this Leia story: and Claudia Gray was on that list. I could not be more excited. I hope to hear the story of Leia’s life on Alderaan, her relationship with her parents (especially with Breha, of which we’ve still heard very little — though the Princess Leia Backstories book was appreciated), and her time in the Imperial Senate. It’s a period that was covered in a few comic stories, the audio drama, Star Wars Rebels‘ “A Princess on Lothal”, and in The Princess, The Scoundrel, and the Farm Boy but only in brief. This is a story I’ve long waited for, and I could not be happier.

There were many other book announcements during that panel — the Luke book, the comics for kids, various other young reader books (including one by Jen Heddle!), and a Becker & Mayer book on the Rebel Alliance that follows the in-universe reference book style of The Jedi Path and others. I especially like in-universe reference books, and what’s notable about this one is that we learned after Celebration that this was the first one in the series written to be canon (The Imperial Handbook was released after the continuity reboot, but was written with Legends in mind).

And I have to talk about Inferno Squad and Battlefront II, because that has to be THE surprise of the convention. It was one thing to go to that panel, as I enjoyed the first game…. well enough, even if it wasn’t quite my cup of tea. I’m not a fan of FPS games and especially of multiplayer-centric games, but it looked really good and it was nice to explore Star Wars planets with such cinematic graphics and character customization. But while I went to the panel expecting little — perhaps a token single-player campaign — I got blown away. You all know what we’ve learned: that we’re getting a post-Endor Imperial-centric single player campaign starring an awesome new female Imperial officer, Iden Versio. She’s the commander of the special forces Inferno Squad — with a book coming out about their post-Yavin experiences — and she’s the daughter of an Imperial admiral while being an Imperial hero in her own right. It’s a campaign written from the perspective of a character who thinks the Empire is worth saving and its loss is tragic for the galaxy. It’s a campaign written by writers who read the full sweep of post-Endor canonical content: they mentioned Shattered Empire, Lost Stars, and Aftermath by name. And about the time that Christie Golden walked on stage and they discussed that Iden’s voice actress, Janina Gavankar, had asked Golden for tips on how to portray Iden in the game based on her portrayal in the Del Rey novel… it was like something out of a dream. The folks sitting with me at the panel can attest: I felt like this campaign, this game, was written with precisely me in mind. It is remarkable. And the best part is that I’m not the only one who felt that way. I talked with a couple of my friends after the panel that day who felt that the game was especially meant for them too. 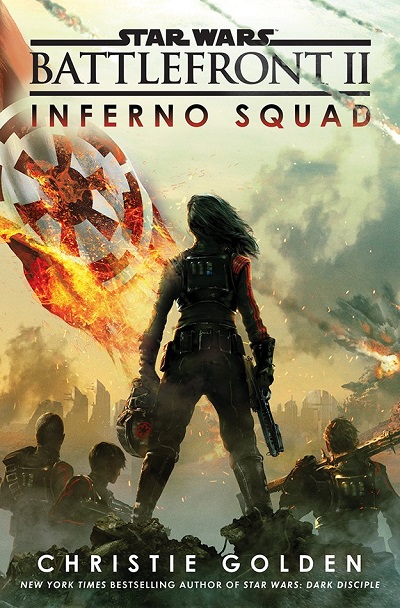 It’s sort of hard to overstate this: not only did we get a game with a story mode that really calls to us, with an Imperial heroine, but we’re seeing all types of media being used to make this game. The game synergizes with publishing and connects with the sequel films. It has a story that involves future plot elements and picks up on seeds planted in stories months and years ago. It’s wonderful. But I’ll have to leave it at that, because at this rate I’ll be writing a whole article on Battlefront II alone and how revolutionary this campaign story is — and honestly, maybe it warrants just that.

Let’s move to Marvel. I didn’t attend the Marvel panel so I have comparatively little to say, though I understand it’s on the live stream and I’ve got to check it out. The main thing I want to say here is that there’s the new Darth Vader comic coming out, set right after Revenge of the Sith. Charles Soule is writing it and while we just had a Darth Vader series, any excuse to let Soule within ink splatter distance of Palpatine is worth it, because the man just writes a great Palpatine. There have also been people who have been looking for more stories set closer to the prequels, and Soule’s Obi-Wan and Anakin miniseries just whet that appetite. So Soule’s Vader is awesome and let’s see more. Oh and one last thing about Marvel — apparently there was an Aphra group photo, and it’s worth saying that it’s really great that the fandom has collectively embraced an original character like Aphra. She means a lot to people, and she just has a cool story too — who doesn’t love space archaeology? (And at time of publishing, Aphra is currently the vote leader on the Hasbro Fans’ Choice poll, which is fantastic. I really hope she wins, and that’s despite the presence of a wonderfully fancy-hatted Imperial Advisor on the poll, Sim Aloo).

And finally — Hasbro. I had a conflict preventing me from attending this panel too, but I watched it like a hawk on Twitter because there was something big I was waiting for. And that was the reveal of the Jaina Solo Black Series figure. Jaina’s my favorite Expanded Universe character — my original favorite from back in the day, before Ars Dangor and Ederlathh Pallopides and all those obscure Imperial nobles I enjoy annoying people with. She’s a character who had her ups and downs in the story and ups and downs in the fandom. But she’s a beloved character to many old EU fans, and one that it’s a genuine surprise to see getting the prestige figure treatment as a 6″ Black Series figure. Ironically, it was perhaps the uniting of old EU fans after the reboot that won her the Fans’ Choice Poll that she probably would’ve never won back in the EU’s heyday. Whatever it is, I’m glad we got the figure. When she won, I was worried. Jaina’s not been handled well before — her original Hasbro figure was so-so, with an unexciting Jedi robe from the New Essential Guide to Characters and a facial sculpt that didn’t look like anything. Jaina also had a Kutobukiya statue that I have absolutely nothing positive to say about, and represents the worst kind of fan service (and did a disservice to the character people were fans of!). 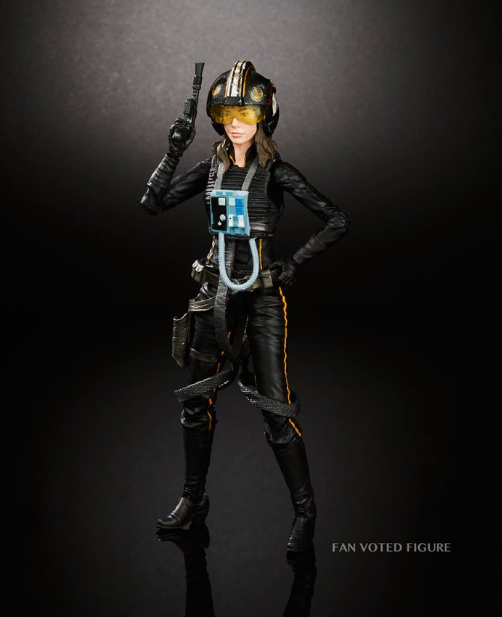 So it was with trepidation that I awaited the Hasbro announcement of her figure design at Celebration. But my fears were unwarranted — Hasbro portrayed the character with care and detail. They acknowledged that she was a character who was well known as a Jedi and as a pilot, and they wanted to do justice to both reputations. So they gave her a black X-wing flightsuit based on Twin Suns Squadron, but made Jaina the first pilot figure whose flak jacket could be removed so she could be a classic EU-style jumpsuit Jedi. They gave her nice hair, but allowed a pilot helmet to fit over it. And since there was no actress or definitive illustration of Jaina, they decided not to use a generic pretty face (like the otherwise excellent Japanese New Jedi Order covers used), but to actually make her look like she was the child of Harrison Ford and Carrie Fisher. So Jaina actually looks like her parents’ daughter, complete with the trademark Solo smirk. Hasbro used a degree of care and sensitivity wholly unexpected to me, and I am very glad they treated my favorite EU character with such respect.

So in a Celebration that didn’t feature any new movie announcements or any earth-shattering franchise news, the publishing and related video game and toy announcements were actually a big deal. It was a new style of announcements, with news spread out over different panels and even shared on social media prior to the convention. But I think it worked out quite well, allowing the panels room to breathe and room to give some interactive content while also letting word spread about some really cool things that Star Wars has in store for its book, comic, video game, and toy fans.

There was a lot of publishing news that came out, and I focused on what struck me the most. But if I’ve missed something cool or didn’t talk about it as much as I should have, let me know in the comments (an example literally just occurred to me: the cover for Join the Resistance #2 was revealed, which I’m very much looking forward to).