One is the sheer degree to which The Force Awakens took it – originally I planned to hold off until Episode IX came out and then watch the lot, with the advantage of the films being bolstered by the books or comics. Problem is I’m no longer as certain that’s going to happen now as there isn’t as much of a plan as I thought. That’s a problem when your opening shot culminates, in part, with Han Solo being killed by his dark-side son. Just throwing that out there and leaving it to someone else to pick up feels awfully slapdash. If it was more restrained, I’d likely be less wary. END_OF_DOCUMENT_TOKEN_TO_BE_REPLACED

I should also note that the criticism of Rey being “overpowered” often comes hand-in-hand with the allegation that she is a “Mary Sue.” That reductive and erroneous assertion has been dealt with eloquently by excellent writers elsewhere, so I will not be addressing it here. END_OF_DOCUMENT_TOKEN_TO_BE_REPLACED 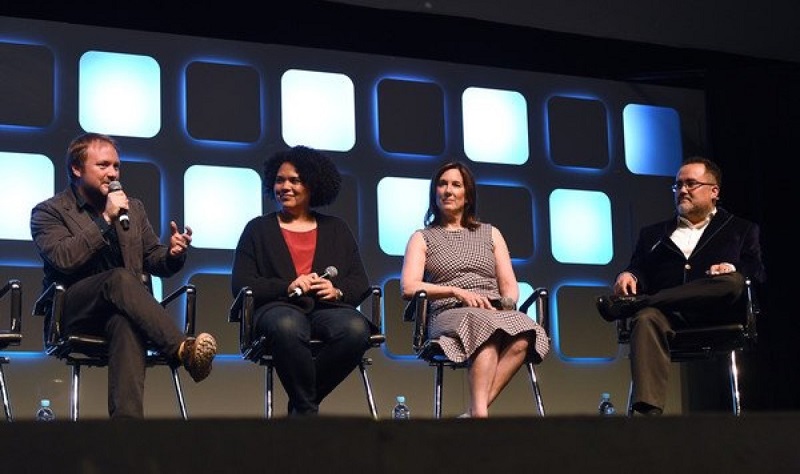 It is a common misconception that the Story Group exists to ensure continuity between the various media in which Star Wars stories are being told: films, novels, comics and video games. This is certainly part of their role, and we can see the fruits of that in the two most recent novels, Claudia Gray’s Bloodline (which had input from Johnson himself) and Chuck Wendig’s Aftermath: Life Debt. Both books draw together story elements spanning existing novels and films, and also give us tantalizing hints of what may be to come in the sequel trilogy. At the “Star Wars Publishing” panel on Saturday, Matt Martin from the Story Group mentioned that aspects of the Adventures in Wild Space series, ostensibly written for children, will soon make their way into stories aimed at adults. The revelation at that panel that the Rogue One tie-in novel Catalyst will be written by James Luceno also implies an intention to ensure continuity between the film and Luceno’s previous novel Tarkin, which covers the early days of the Death Star project. END_OF_DOCUMENT_TOKEN_TO_BE_REPLACED

This definition relies on the idea that a person atones for, or “redeems”, a mistake they have made. Is this what Vader does? This is a value judgement, so we may all come to a different conclusion, but on the whole, I would have to argue that he does not. END_OF_DOCUMENT_TOKEN_TO_BE_REPLACED

Padmé leaves Naboo because she believes in the ability of the Senate to save her people from the Federation. Arriving on Tatooine, however, Padmé is shocked to discover that there is still slavery in the galaxy, and that there are places where the laws of the Republic simply do not exist. Even Republic money is worthless out here, and the entire planet is controlled by gangsters. The implication is clear: the Republic doesn’t care about what happens on the galactic frontier. When we reach Coruscant, we discover that the Trade Federation, a corporation driven by profit, has its own seat in the Senate, giving it a voice in galactic affairs that is equal to any Republic system, and stronger than worlds such as Tatooine. Taking advantage of legalism and bureaucracy, the Federation is able to stall the Senate’s actions. END_OF_DOCUMENT_TOKEN_TO_BE_REPLACED