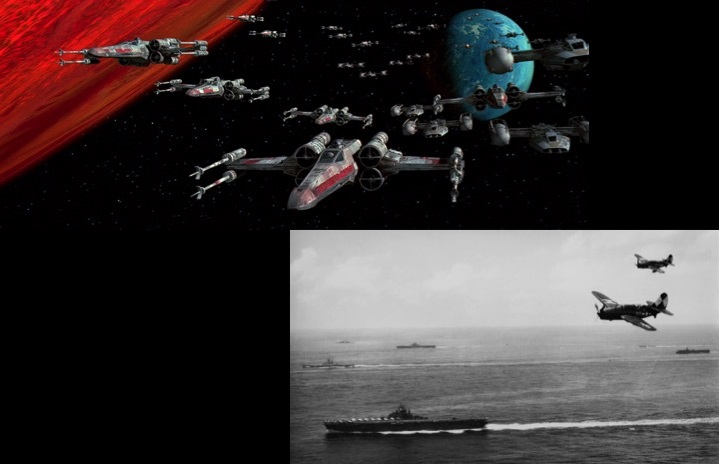 The sight of the ragtag Rebel fleet dropping out of hyperspace into battle is enough to capture the heart of any five- or 55-year-old Star Wars fan. From Rebels to Return of the Jedi, the Alliance’s motley assortment of ships is a striking visual embodiment of their struggle against the Empire. There is real substance behind those amazing on-screen moments, as the Rebel fleet employs tactics that have deep roots in real world conflict.

Lacking the sledgehammer might of the Imperial Navy, the Alliance was forced to develop tactics tailored to their limited resources. Their strategy placed an emphasis on a force built around a backbone of starfighter superiority. The Rebels’ heavy reliance on starfighters echoes the U.S. Navy’s development of aircraft carrier task forces in World War II, which ushered in a new era of combined arms naval warfare.

The Rebel Alliance’s starfighter-centric strategy represented a shift in space warfare. At the time of the Alliance’s formation, the prevailing galactic military strategy prized the power of capital ships over snub fighters. This sentiment traces back to the Clone Wars, where space combat was dominated by large-scale engagements between Republic and Separatist capital ships. Although the Republic made strides in developing effective starfighters like the ARC-170 and the V-wing, capital ships remained the central focus of combat and tactics throughout the war. The mentality that pervaded the Clone Wars is exemplified during the Battle of Coruscant, in which a massive number of capital ships slugged it out toe-to-toe. END_OF_DOCUMENT_TOKEN_TO_BE_REPLACED