In case you weren’t quite sure, my piece a couple weeks ago on What Star Wars Can Learn From Glee was an April Fools gag. But buried within it were a couple nuggets of truth; it’s hard to craft a satirical argument like that unless at least a tiny part of you can see its way to believing it.

To wit: the Disney purchase really does mean a new era for Star Wars, in which the old rules don’t apply—or at least don’t need to. Just ask Marvel. The film slate exemplified by 2012’s The Avengers and continuing into the foreseeable future was hard for an independent studio to even imagine, but much like the Avengers themselves, Marvel’s vision combined with Disney’s financial backing brought about something that just couldn’t have worked otherwise.

I truly believe that this desire to take a successful property to the next level also motivated Disney’s purchase of Star Wars. There’s certainly an argument to be made that Star Wars can’t sustain a new movie every year, or every other year, or whatever the reality ends up being, in perpetuity, but if you’re willing to entertain the alternative (by which I mean a success rate at least on the level of the Expanded Universe’s storytelling), then at least in theory, the possibilities are greater than many realize.

Of course, “a success rate on the level of the EU” is not as optimistic a notion to some of us as to others, but what I think is most important here is that Disney has demonstrated with Marvel a willingness to not meddle with the creative end as long as things are going in their favored direction. In SW’s case, that direction appears to be as many movies as possible. Whether that proves to be a worthwhile direction depends, crucially, not on Disney’s creative instincts, but Kathleen Kennedy’s.

Unfortunately, there’s only so much creative freedom to be found in Episodes VII-IX—in my opinion, they’ve got too much baggage to reach a level much higher than “good enough”, and they’re definitely the upcoming product I’m most wary of. But balancing out my weathered skepticism is the prospect of the standalone films. For these, the sky is absolutely the limit.

The real test of Star Wars’ cinematic future will be the ramping up of the first solo (Solo?) film. The Galaxy Far, Far Away has a breadth of scale and storytelling possibilities that makes the Marvel universe and its talking raccoons look downright myopic, and even if they can’t help but go for low-hanging fruit like Boba Fett or young Han right off the bat, just how those stories are told could run the tonal (and quality) gamut from Indiana Jones to The Fifth Element to Chronicles of Riddick.

It is my hope, of course, that once Lucasfilm has demonstrated the ability to make a Boba Fett movie that isn’t total shit, they’ll continue to mirror Marvel’s path by pushing the envelope of what a Star Wars movie can be—and in doing so, bring in new fans who might not be so into the whole Space Opera thing but would love a Space Political Thriller or a Space Heist or a Space Action Comedy (okay, so Guardians of the Galaxy is already a “space action comedy”—you get what I’m saying).

Already, one positive aspect of the increasingly-anemic EU of the last few years has been an increased willingness to experiment in different genres. I’m very much hoping LFL continues this innovative streak in movie form, because everyone can agree that you can only do so many “episodes”.

It strikes me as ironic that a common gut reaction to Disney is not just that they’ll meddle creatively, but that they’ll do so in a way that’s safe, and sanitized, and traditionalist—you know, Disneyfied. Even ignoring Disney-owned material like, well, The Avengers, if you look carefully at their latest Disney-branded, princess-laden films, Tangled and Frozen, you’ll find themes that are actually pretty progressive. Both films (spoilers, I guess) seem at first to be dealing with typical romance storylines, but in the case of Tangled, it’s Rapunzel who ends up saving the life of her beloved. Frozen takes this a step further by making its original “beloved” into the bad guy—and even the genuine male romantic lead ends up merely a supporting player in the story’s climax, where Anna’s life is saved by her love not for a man, but for her big sister. Let It Go, the song which needs no introduction, has been embraced by some as a gay anthem, but in my opinion the true message of the film isn’t really pro-LGBTQ, but 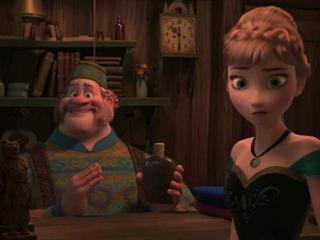 pro-feminist—which is just as big of a deal.

And speaking of the gays, there’s also the little matter of Wandering Oaken’s Trading Post. In a quick cutaway gag, the burly Oaken waves to a family that is both ostensibly his and ostensibly led by another man. It’s not absolute one way or the other, but it’s very easy to read the moment as Oaken, his husband, and best of all, their several children.

Star Wars occupies a similar zone in the popular consciousness in that it’s perceived to be much more innocent and traditional than it necessarily is or has to be. This prevailing assumption gives Disney unique leverage to actually move the conversation forward regarding what it means to be “family-friendly”. A Disney princess who demonstrates progressive values carries with her a certain extra weight in western culture that wouldn’t be the case with, say, an animated Dreamworks character—Dreamworks is just another Hollywood studio, after all, whereas Disney is part of who we are.

The same can be said for Star Wars, and if the rumors are true and we end up with a female lead (or dare I say it, a female person of color lead), it will be a great sign that they are indeed looking to move the conversation forward. It’s probably less likely that we’ll get an openly non-gender-normative character, but Oaken shows that there’s always room to take a baby step or two even in the most high-profile material. And if they lose a handful of ticket sales in the process, well, it’s fucking Star Wars—they can afford it.

Speaking of Frozen and Tangled, there’s one more lesson to be learned from them—they’re not Pixar films. While my childhood was dominated by The Little Mermaid and The Lion King, I came of age in the heyday of Pixar, from Toy Story when I was thirteen to The Incredibles in college. By that point in my life, “Disney-style” animation was dead to me (and creatively, it might as well have been) and Pixar was the future. But Disney held Pixar’s purse strings, so who really cared, right?

Well, Disney did. It certainly took a while, but not only did Disney finally buy Pixar outright like good little megalithic capitalists, but when Tangled hit the scene three years ago, Disney had managed to reverse-engineer all the charm and beauty and humor of the best Pixar films and, crucially, marry it with the traditional Disney formula (namely, fable adaptation and musical numbers) to create something that felt fresh and classic at the same time. And Frozen, now the highest-grossing animated film ever, has demonstrated that it was no fluke—they didn’t just copy Pixar, they learned from Pixar, and then applied it to their own strengths.

To us, that looks pretty nakedly like a Good Thing To Do, but in the world of giant, evil corporations, it is by no means a given. Make no mistake—at the end of the day, Disney’s top priority is to make money. But you don’t stick around this long, and become a cultural institution in the process, unless you’re very good at it. Lucasfilm may have lost a certain purity when it was bought out, but purity had its run in this franchise, for better and worse, and I’m willing to try something different. This is a new era, and the key lesson for LFL to take from its new masters is simple: adapt or die.