As we’ve said over and over on this site, D-Day didn’t just mean more Star Wars movies—it meant a new paradigm entirely for the franchise. The old ways of attracting new fans are slowly but surely producing diminishing returns. It’s time, I believe, for Star Wars to expand its horizons, and take lessons not just from other successful “geek” franchises, but from all sorts of broadly popular media, so as to attract new generations of people who aren’t already lining up for Comic-Con every year.

One great example of a franchise that’s phenomenally successful, critically beloved, and primed for crossover pollenation with Star Wars is, of course, the TV series Glee. Allow me to extrapolate.

Don’t be afraid to offend

Glee is nothing if not sugar-coated—even at its best, it’s got a saccharine, brightly-colored, after-school-special feeling to it that could easily be grating to modern sensibilities. Brilliantly, however, series creator Ryan Murphy added cheerleading coach Sue Sylvester, played in a career-defining turn by the acerbic Jane Lynch.

Sue functions (to a larger extent than many may realize) as the voice of the viewer at McKinley High School, grounding the over-the-top drama with pitch-perfect putdowns that lampshade the sillier characters and scenes in a way that’s both brutal and meta—such as referring to Glee Club member Mike Chang, still a tertiary character at the time, as “other Asian”. As a direct counterpoint to the show’s self-image-positive message, Sue is there to point out a big nose or a goofy hairstyle or an awkward fashion choice so the “good guys” don’t have to, and she provides the bulk of the series’ comedy in doing so.

This practice of offensive humor masking genuine sentimentality is just what the sequel trilogy needs; as I commented a couple weeks ago, I believe that a little superficial whimsy is crucial to the Star Wars formula where the films are concerned, and if they’re not willing to keep it contained in a species like the Ewoks or the Hoojibs, I think the next best option is just to lampshade the whole thing with the kind of crude playfulness Lucas often attempted but could never manage to get quite right.

If there’s one thing the Special Editions got right, it was fleshing out the musical numbers in Jabba’s palace in Return of the Jedi. If you doubt the value of musical performances in the Star Wars saga—and I won’t even count the cantina band—look no further than the outcries surrounding the removal of Yub Nub in favor of a restrained, melancholic John Williams piece; clearly, those who complained about Jedi Rocks weren’t objecting to the idea of a musical number, just to the fact that the song they happened to prefer didn’t make the cut.

Not only do the musical performances in Glee help (much like the humor) to ground the characters’ soaring emotions and make them more accessible to audiences—something we can all agree the prequels could’ve done a better job of—but they provided an excellent opportunity to cross over the show’s financial success into the realm of music downloads. Disney has made no secret of its desire to maximize Star Wars’ profit potential, so just imagine what they could do with four or five original songs per Episode. No, better yet, don’t imagine it—I’ll just leave this here:

We don’t need no stinkin’ continuity

As I mentioned earlier, one of the best parts of Glee‘s humor is that it’s often extracted directly from just how little the show makes sense. Secondary characters disappear for months at a time—sometimes forever—and barely merit a raised eyebrow. Never-before-seen extras will suddenly appear as full members of New Directions, yet the speaking characters will never so much as acknowledge their presence. The father of main character Kurt Hummel actually ran for Congress, won, and never mentioned it again beyond wearing a suit once or twice. And don’t even get me started on the piano player.

This culminated, flawlessly, when last season ended not with the national glee competition, as per normal, but in the middle of the year, at Regionals; the current season then kept on playing out over the seemingly endless second half of the previous school year. It’s a bit of a stretch, you may be thinking, but hardly impossible, is it? Well, no, but allow me to introduce you to “Previously Unaired Christmas“, wherein the main narrative, presumably sometime in April, takes a brief break while we return to the holiday season for a story that—the show claims—was intended to air the previous season, 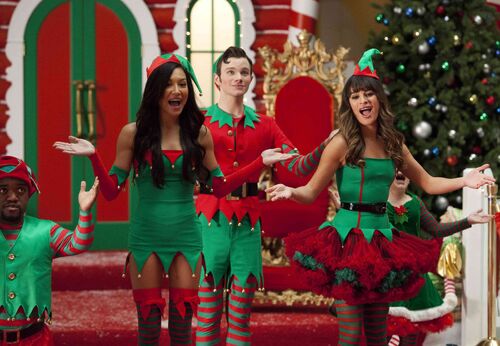 but didn’t because it was too controversial (teen drinking! gasp!). In other words, it’s not a separate Christmas episode, taking place around the edges of the existing Christmas story, it’s a totally different version of the same Christmas. Sound familiar, Expanded Universe fans?

No, Glee‘s genius is to recognize that conventional ideas about continuity are simply outmoded and unnecessary—or at best, come second to telling the best stories possible. While I’d love to see elements of the EU show up in the sequels, it’s my true hope that the ultimate priority is the storytellers’ vision. If Luke needs to not have a wife and Chewbacca needs to be alive, so be it.

But why stop there? George Lucas would say that consistency is slavery, and to stop revising a story is to abandon it to irrelevancy—so bring on the Ultimate Editions! Think of how much storytelling potential there would be in a post-redemption Anakin Skywalker; if JJ Abrams wants to tell that story as part of Episodes VII-IX, then by all means, undo that death as well. It wouldn’t even be that hard; after all, we never saw a body. Lucas may say now that he faded away offscreen, but he also used to say that Han shot first—and look how that turned out.

Ultimately, we all want the best sequel trilogy possible; one that can stand the test of time as well as the originals. And if Lucasfilm can expand its horizons and learn the lessons I’ve outlined above, I think there’s every chance they can create something truly powerful, with all the timeless appeal of Glee at its best.

One thought to “What Star Wars Can Learn From Glee”