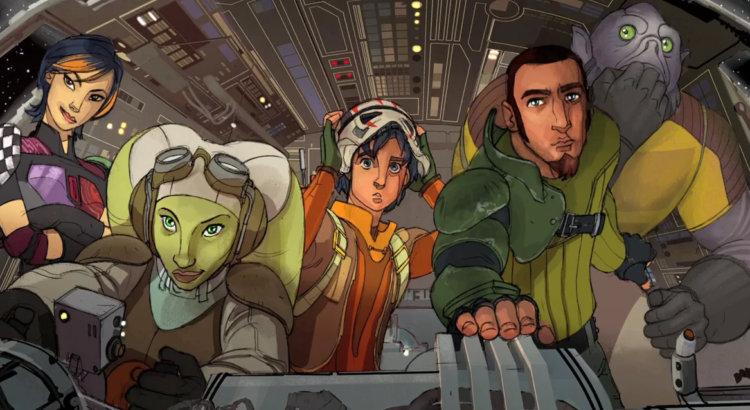 Nine years ago, my debut piece was published on Eleven-ThirtyEight. It was a defense of the then-yet-to-come animated series Star Wars Rebels, hitting back against the criticisms that early promotional materials had been receiving of being too “kiddie” or “Disneyfied” compared to its predecessor, The Clone Wars. Since at the time, the show had yet to air, I had to work in the hypothetical and with conclusions based off of what little we knew and what I could try to infer, meaning that not all aspects of that article have aged well, and the writing itself could certainly use some improvement. But the reason I bring it up here is that it shows that I have been following Rebels for a long time, even before the show itself had released anything more than a piece of concept art. I followed the show’s development and release, I’ve absorbed the tie-ins (few though they may be) and, after the show’s end with its fourth season, I’ve watched the horizon for any sign of a sequel.

I and many others like me expected that there would be one, because what successful story in the Disney Star Wars era doesn’t get a sequel of some sort? For a while, it seemed like one was very near in the offing. Rumors came trickling out years ago about a proposed “New Republic” show starring some members of the Rebels cast, dealing with the fate of Thrawn and showing the youngest members of the Spectre crew, Sabine Wren and Ezra Bridger, as adults. But that show never emerged; it remained the subject of rumors and nothing more, as other animated efforts like Forces of Destiny and Star Wars Resistance came and went. Rebels moved further and further into history as more Star Wars media came out, obscuring it further and further in favor of other eras and other characters.

Then The Mandalorian was released, and everything changed. At a time when the lukewarm receptions of Solo and The Rise of Skywalker had left the future of the theatrical films in doubt, The Mandalorian was a genuine blockbuster smash, or at least as close as a show on a streaming service could be. Thanks in large part to Baby Yoda, it put Star Wars into the public consciousness in a way that it hadn’t been in years. And with it came a seismic shift in the Lucasfilm slate of releases moving forward, as theatrical releases were deprioritized (to the point where, as of this writing, there hasn’t been a theatrical Star Wars release since Rise in 2019) and Disney+ releases ramped up. From the first season of The Mandalorian was born a second season, naturally. And from that second season three other shows were born, all announced in the wake of the finale: The Book of Boba Fett, Rangers of the New Republic, and Ahsoka.

The announcement of the Ahsoka spinoff show wasn’t a total surprise. One of the show’s main creative forces, especially in the second season, was Dave Filoni, and the episode he both wrote and directed starred Ahsoka Tano herself in what I believe qualifies for the TVTrope of being a Poorly Disguised Pilot. The rub is that, in that episode, Ahsoka’s entire motivation ties back to Thrawn’s disappearance, one of the plot threads left dangling from Rebels’ finale. Thus, with the announcement of the Ahsoka show itself, we knew for the first time since the show ended that Rebels was getting a follow-up—a follow-up named for and starring Ahsoka Tano, rather than any of the show’s main characters, and in live action, rather than in animation.

Needless to say, this led to a very split reception. Some people were excited because they see live-action shows as being a step up from animation on some ethereal, artistic level. Bob Chapek, the (then current, now former) CEO of Disney, expressed that he sees animation as being something for children. And this sort of attitude pervades the Star Wars fandom itself, where animated projects are largely seen as secondary, lesser media. The one possible exception to that attitude is The Clone Wars, and largely due to a sort of grandfather clause, with it being the oldest Lucasfilm Animation project and having had George Lucas’s direct involvement. Other projects, be they Rebels, Resistance or even less conventional fare like Visions, are pushed off into a corner, if they’re acknowledged at all.

On the other hand, you have people like me. I love animation, not just in terms of Star Wars projects but in terms of the medium in general. Each new animation project that Lucasfilm announces is a project that I look forward to, because I want to see the universe explored in new and creative ways that aren’t possible in live action. Animation is limited only by budget, time and artist sensibilities, and every animated Star Wars production has pushed the universe outward in some way, introducing or depicting new planets, new species, new characters and beyond. I also love Rebels. The original show holds a very dear place in my heart, and led to some of my fondest memories in this fandom as a whole. I covered just about every episode of it weekly for this very website, and I was always on the lookout for news of a new animated show following up on the story.

The thing to remember (even for myself) is that just because Ahsoka is coming out doesn’t mean that an animated Rebels sequel show will never happen. Animation as a medium is far from dead at Lucasfilm, and even if all of the major animated projects in the works, like The Bad Batch and Tales of the Jedi, are essentially spinoffs of The Clone Wars, it’s clear from the production quality of those projects that their animation teams have only gotten better at their craft. A Bad Batch-style spinoff or sequel show, with a limited cast and scope, might be in the offing, especially if Ahsoka is well-received. That’s something I’m holding out hope for, since I have no idea whether Ashoka will satisfy me or not.

I fully acknowledge that, not having seen a second of footage from Ahsoka yet, the show might wind up being something I enjoy. I can’t pass judgment on it yet and I don’t want to try and forecast it like I did with Rebels eight years ago; since they’re still keeping so many elements of the production under wraps, there’s a lot we don’t know yet and won’t know until it starts to air. But I cannot help but feel disappointed. When I first had hope for a Rebels sequel, a show about Ahsoka was not what I had in mind, nor was live action. I want an animated show. And I would be perfectly happy with Ahsoka being a secondary character, if she appeared at all. I want a show about Hera, about Sabine and Ezra. I want to see them adjusting to the galaxy after the Empire’s fall, to the new status quo of their universe.

But it doesn’t matter much what I want, does it? It matters what show Lucasfilm thinks will be successful; The Mandalorian was a big success, and building off of that success is a logical step for the studio to take. The Favreau-Filoni-verse of shows will continue to expand and push outward, likely with another wave coming on the heels of the shows initially announced after the second season of The Mandalorian, to fill the gap left by Rangers of the New Republic being quietly canned. For the time being Lucasfilm has put just about all of their eggs into the Disney+ live-action basket, so any Rebels sequel that is produced is going to be in that format. And since Ahsoka is Dave Filoni’s favorite character, that’s who it will star. All I can do is wish things were different, and hope that something in the future brings the sort of sequel to Rebels that I’ve been waiting for.

One thought to “A Rebels Reflection: Ahsoka and the Future of the Rebels Storyline”