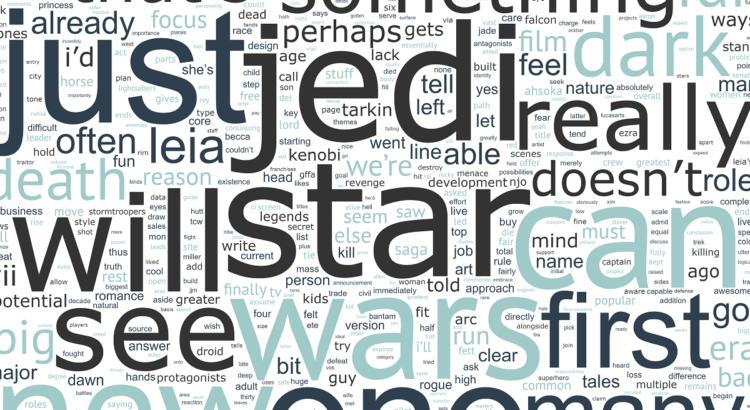 Four years ago, I attended Star Wars Celebration for the first time. Never having attended a real convention before, the months leading up to it were filled with a lot of uncertainly regarding hotels, passes, the survival of my car, and so on—some of which I documented here, actually. The biggest uncertainty, of course, the one that fed all the others, was money. Had I saved enough? Had I saved enough to enjoy myself? What if something went wrong?

To alleviate some of these concerns, I decided to ask you, our stylish and insightful readers, for assistance paying that year’s hosting bill. I originally intended to collect donations for a week, but by the third day I had to deactivate my PayPal link because I had collected enough to pay for not just that year’s hosting but for four years.

That level of support felt lovely, of course, but it brought with it a major sense of responsibility: I now had to earn all that support. With only one Star Wars movie left on the horizon at that time and Disney+ still a major question mark, could I keep Eleven-ThirtyEight going another four years? What the hell would Star Wars even be by the end of that time?

It also occurred to me, though, that those four years of funding would bring us to 2023, the year of the site’s tenth anniversary. If I could keep things going that long, justify all that faith you folks had expressed in us, that anniversary would be a great moment to put this whole thing to bed. That was still a long way off, of course, so I put a pin in it and got back to business.

And now, here we are. While ETE’s output has definitely slowed down a great deal since The Rise of Skywalker came and went, I’ve been able to devote a lot of time and attention to the things we have published, and some of our finest work has come out of that. Purely by being so rare, ETE pieces have become minor occasions unto themselves—exactly what I’d wanted for us from the beginning.

Speaking of which, our About the Site page reads as follows:

The goal of this site is to present the “big picture” of Star Wars and fandom, and to help ease the transition into the sequel trilogy era with a bare minimum of doomsaying. In doing so, we hope to set a tone for Disney-era fandom that’s conversant in the Legends Expanded Universe without being unnecessarily mired in it.

While the wording has evolved a little, that central objective—easing the transition into the sequel era—has been there all along. And whatever you think of our role, and influence, in the fandom over the last decade, no one can deny that that window of time has come and gone.

We could keep going, I’m sure, limping along indefinitely and churning out a few more pieces every year, but I never wanted ETE to just be another Star Wars blog. I set out to do a specific thing, to occupy a specific rhetorical territory for a specific period of time, and as far as I’m concerned, that mission has been accomplished. I’d rather conclude with intentionality on a nice round number than keep fading into the background as the staff’s (and frankly, my own) interest continues to wane and WordPress blogs become less and less relevant.

So that’s what we’re going to do—but fear not, we’ve got a good amount of time left before that happens. ETE launched on July 8, 2013, and our final piece will run on Friday, July 7, 2023. While we’ll remain open to submissions as per usual until the end, I’d like to take this moment to extend a special invitation to any former contributors, staff or guests, who’d like to get one more piece in while they can: you’ve got five months, folks. And if you’re one of those people—and I know you’re out there—who’ve always wanted to pitch us something but never got around to it, well, it’s now or never.

In addition to any regular pieces they may come up with in the meantime, I’ve also asked all of our active staff (meaning the people whose columns are listed in the “Nonsense” menu up above) to compose a special “final comment” piece to run during that last month or so—something that reflects on the lessons of the last ten years, and/or considers where the franchise seems to be going from here. Hey, maybe by then we’ll get lucky and actually have some idea of what the next movie will be!

What happens after July? Well, next month I’ll be paying for another full year of hosting,[1]To be crystal clear: my personal financial situation has improved a good deal since 2019 and the decision to end ETE had nothing to do with those aforementioned money woes. and once the final pieces have run I’m going to work on moving the site to a free, or at least cheaper, platform where our back catalog can live on as a resource for googlers and people trying to win social media arguments until some WordPress or PHP update finally kills it for good.

Speaking for myself, I have every expectation that I’ll continue to write things—both Star Wars-related and otherwise. If you’re interested in what that turns out to be, I’d simply ask you to stay tuned and keep an eye on our Twitter account (assuming Twitter lasts that long—if not we’re also on Hive and Mastodon). Likewise, if any of our staff elect to continue writing elsewhere that information will be added to their bios here and boosted socially wherever such things can be done in the dark and uncertain future.

For joining me on this ride, my immense thanks go out to David Schwarz, Sarah Dempster, Mark Eldridge, Ben Wahrman, Nick Adams, Abigail James Dillon, and especially Jay Shah and Ben Crofts, who’ve been putting up with my DMs since the beginning! Further thanks to all of our past staff and guest contributors, all fifty-plus of whom should be listed on the Staff page. And of course, thanks to you for reading.

According to WordPress, this site is currently home to almost 1.5 million words of original content (only a third of which have been about Dexter Jettster). Here’s to another five months of great writing, and hopefully the removal of that “almost” before we’re done.

2 thoughts to “The Legendary Eleven-ThirtyEight Turns a Page”