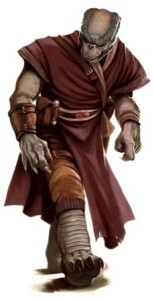 We first meet the Noghri when one of them, guarding Grand Admiral Thrawn, scares Pellaeon from the shadows. They are silent, stealthy assassins, described as looking rather unnerving and speaking in a gravelly voice. All we know of their history is that they had worked for Darth Vader and are now Thrawn’s personal bodyguards, quickly tasked with capturing Leia Organa Solo and delivering her to the Empire alive. Her befriending them gives us insight into what little we know about the Clone Wars at the time of Dark Force Rising, and their devastated homeworld goes from a potential sign of Imperial benevolence to a somber reminder of the might of the Empire. The Noghri will likely never be able to clean up their poisoned homeworld, and they instead join with “Lady Vader” as her faithful bodyguards. They remain in the position throughout the rest of the EU, with various Noghri watching over Leia and Han and their children. Though they are not free from controversy- they are, after all, the former personal assassins of Darth Vader- they are endlessly useful to the Solo family.

By now, we know what happened in the Clone Wars, and in light of the present timeline, the devastation to Honoghr could easily have been in that time or during the rise of the Empire. It is reasonable to assume that the Empire has covered up a good deal of their early history, and by the time the Noghri are discovered in Dark Force Rising, we are well aware that the Empire still has many secrets left. Better still, the Noghri themselves don’t learn the actual story of why their planet is poisoned for a while, and that’s a useful way to expand upon in-universe history and its frequent unreliability in a war-torn galaxy. What if we don’t discover the Noghri until Episode VII? What if the Empire still has secrets and unfinished business lying around? It’s a big galaxy out there.

Perhaps a ship- Imperial, smuggler, Separatist, any of the above- did crash on an out-of-the-way planet, poisoning the land, and the Empire found the species there too useful to just throw away. Perhaps someone else ran into the Noghri- bounty hunters, smugglers, or various other unsavory elements. Regardless of how, the Noghri find out that something has destroyed their world, and due to their connection with Darth Vader, seek out his heirs. Those heirs are not Sith, and are in fact halfway decent people, and they take on the Noghri as a protection detail. Leia and Luke now have ever-present bodyguards hiding in the shadows, ready for anything from assassination attempts to escorting the Solos, Ben Skywalker, Threepio, and a potted ladaulum off of Coruscant.

For better or worse, one of the great things about a complete reboot of the EU is that we have so many new stories to form. We could so easily find the Noghri the same way- an out-of-the-way species erased from historical records, sent to capture or kill a prominent member of the former Rebel Alliance. Further investigation indicates involvement of maybe the Empire, maybe Sith or Separatists, maybe all of the above. A side plot brings one of Darth Vader’s children to Honoghr, where they discover yet another world devastated by the Empire. Even thirty years after the Battle of Endor, the galaxy is a large place with many areas that have stayed out of the limelight, especially those the Empire was deliberately trying to conceal.

So, why keep the Noghri? We have our bounty hunters and hit men and general scum. But we do not have hit men and bodyguards with a backstory that ties together galactic history so neatly. One of the things Episode VII should do is allow the effects of previous galactic events to still be present, and having a species whose history is uniquely linked to the early Empire (and the Empire’s dark secrets) is an opportunity to bring the movies together. Acknowledging the past with a story that could have easily been overlooked in the main plot creates a great side plot and brings more unity to a vast universe.

What if we don’t find out much about the Noghri in Episode VII? What if all we see are these stealthy grey aliens, trailing Leia and/or Luke as silent bodyguards? What if we only find out what they are capable of when they are called to action? Putting them on the side of our heroes and only telling their backstory through flashbacks might be an excellent way to fill in the thirty years between Episodes VI and VII. At some point, we’re going to need that space filled in, and even if the story of the Noghri isn’t kept quite the same, it’s nonetheless something that can be tied into other galactic events. 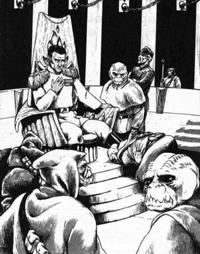 In short, keeping the Noghri is a plot hook that can draw in many elements of the galaxy. They are directly connected to our heroes, but also have a lot of opportunity for side plots of their own and helping to fill in the large missing chunk of time. Remember when we first met the Noghri and how unique they were? It was impossible to find any information about them, and what they knew of their own history showed well just how far the Empire had gone to rewrite history in their favor. We got a view of not just the Noghri and their place in the Empire, but also what a galaxy recovering from a civil war was like. There is so much potential in this otherwise minor species.

I vote for the Noghri to survive the EU reboot.

One thought to “Escape Pod: Noghri”