Of course, this isn’t the case—and complaints of that nature generally fall into the category known as “Not All Men” objections, in which people ignore the precise substance of a complaint and choose to argue against gross overstatements instead. But I’ve seen this particular flavor of debate come up enough at this point that I thought it would be helpful to demarcate what exactly can be considered, essentially, “good sexy” and “bad sexy”.

Exhibit A: The Hawkeye Initiative. What started as, in this writer’s opinion, a hilarious send-up of ridiculous Strong Female Character action poses (which quite literally bend over backwards to accentuate T&A regardless of whether the pose is either anatomically correct or plausible for the character) has expanded and evolved into a much broader means of calling attention to just how much comics art exists with solely the male gaze in mind. This evolution means that even art that is technically proficient and not blatantly out-of-character can still be subject to Hawkeyeing—which is still awesome, but I will concede can confuse the message slightly. 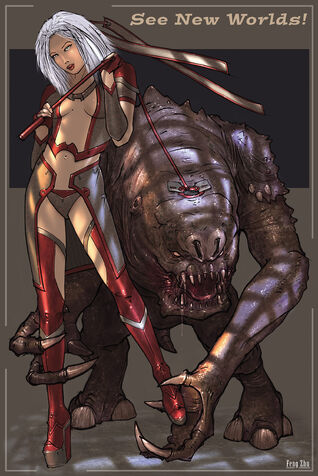 Exhibit B: the “Imperial Recuitment” images by Feng Zhu. Star Wars Visionaries, released by Dark Horse in 2005, featured two in-universe pin-up-style posters by Zhu. One can be seen to the left, and the other, well, is the same kind of thing. He actually made six more that didn’t make the cut for Visionaries; the wook has a handy gallery of them, because of course it does.

Your mileage may very, but for my part, I wasn’t overly impressed with Zhu’s art style or his over-the-top redesigns of Imperial uniforms in order to make them more “sexy”—but at the end of the day, I’m just not super into that kind of thing. What I’m trying to say here, though, is that I’m totally cool with Star Wars being bawdy once in a while.

Many contributors and fans of The Hawkeye Initiative would agree, I suspect, given how much fun they have sticking Clint in g-strings and tassles. I wanted to know for sure, though, so I spoke to Britt Roth, an artist who contributes to THI and posts at the Jedi Council as TrakNar. Roth agreed that pin-up art “has its place.” She added, “such images had been used historically, and they proved to be successful, along with a long-running rifle-maintenance comic provided to soldiers that features cheesecake artwork—soldiers were more receptive to it than the standard manuals.”

Feminists in geek culture are used to dealing with all sorts of false equivalencies, but it’s especially troubling when we’re treated like puritans—as if objecting to specific salacious imagery means one must object to all of it.

There’s a larger conversation that could be had about just how salacious Star Wars should be when it’s in some respects a children’s franchise, but the real problem, in my opinion (aside from when it’s just hacky and ridiculous) isn’t the existence of sexy women in SFF art, it’s that sexy women are the background radiation of the entire culture. People find The Hawkeye Initiative funny because it demonstrates just how pervasively absurd comics art can be, and that the only thing keeping us from noticing is the fact that it’s women. According to Roth, “when such imagery sacrifices storytelling—being shoved into the middle of a dramatic or action sequence—because the artist wanted to draw some T and A (or was even directed to draw such in the script), then it becomes a problem. A dramatic scene featuring a female character’s defeat loses its impact when she looks as if she were pounded into a sexy-time coma.”

The ideal scenario as I see it, then, is not less cheesecake, it’s higher-quality and more-equitable cheesecake. By which, of course, I mean, men should play by the same rules. Even discounting The Hawkeye Initiative, there’s enough Loki fan art out there that there’s clearly a desire for more male cheesecake (which I suppose would be “beefcake”) in geek culture—and don’t even get me started on the Luke fangirls. There was a not-inconsiderable amount of squealing on Twitter when the cover of Heir to the Jedi was revealed, and it can be tempting to see that as immature—especially when the objects of one’s own desires are “under attack”—but that’s the privileged perspective of a straight man in an almost completely straight-man-dominated industry, where pandering to your interests is the status quo, and even the most minor pandering to someone other than you feels like an insult.

There’s never going to not be cheesecake in geekdom; I think that’s pretty clear. But there’s nothing wrong with that. Sex appeal is an awesome force that can unite all sorts of demographics, especially in Star Wars, which has as many roots in Frank Frazetta as in Flash Gordon. And speaking as a straight man who likes Slave Leia as much as the next straight man, I’m willing to spread the love around a bit more. You have to give Frazetta this—he was an equal-opportunity undresser.

5 thoughts to “In Defense of Cheesecake”