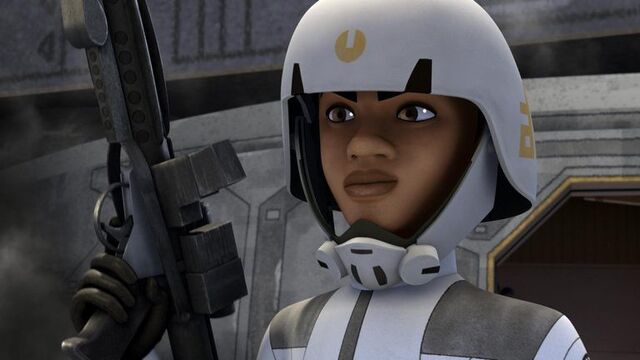 Last Friday, I spoke with Servants of the Empire author Jason Fry about what goes into good Star Wars technobabble, and he hinted at the larger plot of his own ongoing young-adult series The Jupiter Pirates. This time we’ll get a little more in-depth on Edge of the Galaxy; how it portrays the Empire, what elements it shares (and doesn’t) with the Rebels TV series, and what it’s been like developing the series with the Lucasfilm Story Group. Oh, and I asked him about “Sheev”, because of course I did.

There’s been, suffice it to say, a lot of interest in post-reboot depictions of the Empire and its treatment of aliens and women. While the latter situation is much improved to my mind, the continuation of Imperial xenophobia—a major theme in Edge of the Galaxy—was surprising to some people. When it’s speculated in the book that anti-alien prejudice is more an Outer Rim mindset in contrast with the more cosmopolitan Core, is that just the people of Lothal talking, or is that a reliable OOU perspective? And either way, do you see this matter as having evolved in the past year, or is it the same as it was in the EU?

I had some back and forth with Story Group and the executive producers about this question while Edge of the Galaxy was taking shape, and where we wound up was that the Empire may not be openly and uniformly xenophobic, but if you’re a committed xenophobe, you’re probably also a pretty rah-rah Imperial.

The idea of a sexist Empire seems pretty dead to me, on the other hand. That’s not based on any discussions I’ve had or orders I’ve received, but it’s my conclusion from reading A New Dawn and watching Rebels and seeing the reaction or lack thereof to some of my narrative choices. And I think that’s a good thing – to me the sexist Empire was a case of the EU stumbling by creating too obvious a parallel to our own 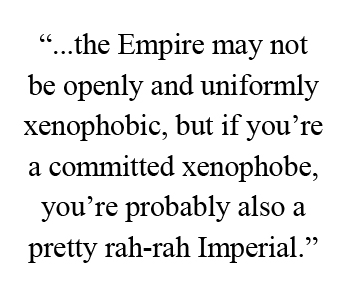 The question about Core vs. Outer Rim mindsets, though, is an overreach extrapolated from the viewpoints of just two characters – one who’s an out-and-out xenophobe (Fhurek) and one who’s a smug snob (Leo Leonis). Their attitudes aren’t meant to be representative of anything except themselves. Fhurek’s a little bully, yes, but Leo’s being ridiculous when he says that in the Core Fhurek would be fixing droids or cleaning streets.

Or, to quote Tepha Leonis, “Let’s not blame the entire Outer Rim for the actions of one man.”

Since I keep writing super-long questions, I’ll keep this one simple: you’ve been working under the Story Group system for more than half a year now. What’s the biggest misconception fans have about them?

That they’re omniscient and all-powerful and therefore should be perfect?

Don’t get me wrong, the Story Group folks are really smart – their advice has made everything I’ve worked on much better. But they’re a small group of people trying to juggle a whole bunch of projects and dealing with egos and changes of plan and things that go wrong. They’re trying to figure out new storytelling rules of the road for a massive franchise, and they’re trying to do it within a new corporate structure while all eyes are on Episode VII, a high-profile new TV show is finding its legs and about a billion other pots are boiling at the same time. With all that going on, of course there are going to be inconsistencies and slips here and there.

Expanding a little further on that, Zare Leonis’ first episode of Star Wars Rebels aired this past Monday—what did you think of the final product? You mentioned on StarWars.com that the result of his search for his sister Dhara was left in your hands; does that mean we shouldn’t hold our breath for her to show up on our screens eventually? And more broadly, has there been any give-and-take with the elements you’ve added to Zare’s story, or are you just rolling with what they hand down to you?

“Breaking Ranks” was the one episode I got to see early, and I was really drawn in by how faithfully it channeled A New Hope – down to the lighting and the shot constructions. Most of the time I really liked The Clone Wars, but I grew up with the classic trilogy, and that’s what I’m wired for. So beat-up starships and the clatter of stormtrooper armor and low-slung blasters will always make my heart race more than a bunch of different colored lightsabers and the tramp of battle droids.

As for Zare’s future, he’s a show character and arrived with his backstory already created, so I’m always going to take whatever the show team does with him as my starting point. Fortunately, so far they’re working way ahead of me, so it’s been easy to adapt. Regarding give-and-take, everything I’ve come up with has been run by not only Story Group but also the show team, so hopefully that’s a blueprint for telling a cohesive story across the books and the show. 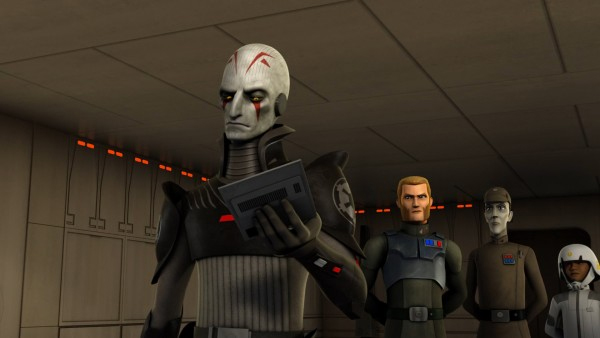 The second Servants of the Empire book, Rebel in the Ranks, begins a few months before “Breaking Ranks,” showing Zare’s orientation at the Academy and introducing Oleg, Jai and the cadet that Ezra replaces. Rebel in the Ranks includes the events of “Breaking Ranks,” but we see those events almost entirely from Zare’s perspective, and some scenes from the show begin earlier or end later than they do in the book. So – spoiler warning – we’ll see Zare’s conversation with the Inquisitor, for instance. (Really, really fun to write!) And we see what Merei’s up to – which is quite a bit – and how that story dovetails with the show. Beyond that, well, we’ll see.

But to go back to Edge of the Galaxy, I hope it shows that you can write a book for kids that isn’t simplistic. I mean, I think there’s a lot going on in there and plenty of ambivalence. For instance, I worked really hard on the scene where – spoiler alert – Zare’s furious about Fhurek getting rid of his alien teammates, but his remaining teammates kind of hem and haw about the idea of a walkout. I had Merei point out that Zare’s headed for a life at the top of Lothal society no matter what, but winning a league championship is one of the only ways the other SaberCats can change the course of their lives. So where does Zare’s loyalty belong, and what’s the right thing to do? It’s not an obvious choice, and I know kids get that – because their lives are the farthest thing from simple.

Last but not least (okay, least), I might as well give you an opportunity to chime in on the “Sheev” situation. I know from the JCs that you’re pretty philosophical about the whole thing, but if it were up to you, would you have preferred to stick it in that warehouse with the Ark of the Covenant?

That’s a great question. I don’t know. I really don’t. On the one hand, no, it’s not a great name. (Though if it had been ‘Shieve’ I doubt people would have lost their minds – sometimes it really is the little things.) On the other hand, wouldn’t you have given your eyeteeth to leaf through one of George Lucas’s legal pads to discover Palpatine’s first name?

I mean, Sheev was George Lucas’s name for George Lucas’s character. Isn’t that kind of thing worth something? Shouldn’t the custodians of the franchise find and make use of as much of that material as they can?

Hey, at least it isn’t Darth Icky. Or Elan Sleazebaggano. If you can find a way to get that one back in the warehouse, I’m all for it.

You know, I remember reading a news article circa Attack of the Clones that speculated “Elan Sleazebaggano” was in some way a comment on Elián González. People be crazy. Anyway, thanks to Jason for speaking with us once again, and I look forward to hearing more about Rebel in the Ranks in the future! It can be pre-ordered from the link earlier in this piece, as can the second Jupiter Pirates book, Curse of the Iris, by clicking here. Jason’s personal blog can also be found right here. For my part, while I’m happy to say that Jay’s review speaks pretty much for both of us, I’ll have some final thoughts of my own regarding Edge of the Galaxy in the near future.

One thought to “Jason Fry Keeps Talking To Us: Wired For The Classics”