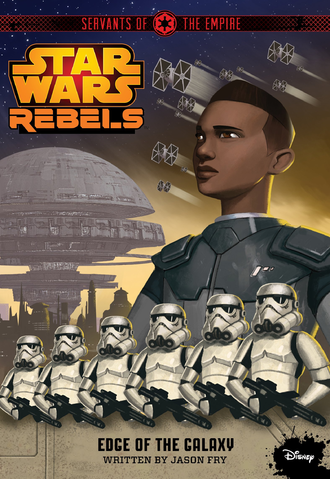 When we last spoke with our good friend Jason Fry, Writer of Things, it was a dark time for the Expanded Universe—at least insofar as there wasn’t one anymore. Jason was already hard at work on Edge of the Galaxy, the first book in his four-part Servants of the Empire series (available now—just click the link above), but he was gracious enough to chat with me at length about the then-breaking reboot news, that whole Wookieepedia “breast” kerfuffle, and his own young adult series The Jupiter Pirates.

Now that things have relaxed a bit and the Galaxy Far, Far Away looks to be pretty much the way we left it, Jason was free to speak with me in a lot more detail regarding Edge of the Galaxy, Story Group, and where both of his series are heading. Take a look!

Let’s start with something totally random that I’ve always wondered about. Allow me to quote a line from early in Edge of the Galaxy, describing TIE Fighters flying overhead: “The new engines are an improvement over the P-s3s– fuel efficiency is 15 percent better and the heat exchangers are less prone to flux. Which means the pitch of the ion engines is a little higher.”

Now, to some extent that’s established information from the EU, but I was hoping you’d talk a bit about what goes into the average line of, if you’ll forgive me, technobabble like this. When you write something like “the heat exchangers are less prone to flux”, do you always come up with a complete meaning for it in your head (and how it relates to engine pitch, for that matter), or do you treat Star Wars science as open-ended enough to allow straight-up gibberish? And what about in the universe of Jupiter Pirates, where you’re essentially god?

Oh, I just try to make it sound good enough that the reader doesn’t stop to worry about it.

Though that brings up an interesting story: When I was writing Clone Wars: Incredible Vehicles, I’d get these gorgeous cutaway drawings from Richard Chasemore. They came to me completely unannotated, and it was my job to put labels on all the parts.

Well, it just didn’t work. I struggled through one or two of them and it was a nightmare, and I couldn’t figure out why. Eventually I realized what was wrong: There was clearly an organizing principle at work, but I didn’t know what it was. So I asked around at DK and it turned out Richard had a definite idea about what all the vehicle systems were and how they fit together. He knows machinery really well, which is one reason he’s such a great Star Wars artist – his vehicles look like they’d actually work. But he wasn’t writing any of it down – I think partly because he was expressing that through the art and partly because he didn’t want to step on my toes. Because I lacked the background he had, I couldn’t think along with him. 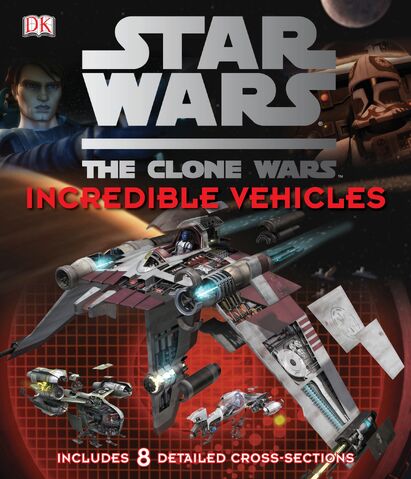 So I asked Richard to send me the sketches with notes about what he imagined the systems were. He was happy to do that – maybe even a bit relieved — and then things went much more smoothly. I’d space-ify some of his labels and descriptions and add stuff here or there as needed, but now we were starting from the same point. And that let me concentrate on supplying value in other ways — say, by connecting vehicles from the same manufacturer together, or talking about civilian vs. military uses, etc.

But the heat-exchangers thing? Eh, there’s a TIE up there somewhere in the night making a sound, so no need to trace the fuel slugs. I tried to make it sound not totally ludicrous and checked that it didn’t run afoul of anything established about TIEs and how they worked, and then I moved on.

I mean, that little detail you asked about is really about character – the kids are Imperial enthusiasts and Roddance is the kind of person who’d show off for them by quoting highly technical stuff, but you quickly realize he isn’t doing it to bond with them but to put them in their place. So a little conversation about TIE parts tells you something about that character that you’ll want to keep in mind.

I guess that’s one reason these lists of things that have been “recanonized” make me unhappy. I understand the impulse behind it, believe me – I contributed hundreds of thousands of words to the EU, after all – but in a novel like New Dawn or Edge of the Galaxy that stuff’s there to support the storytelling. When I see fellow fans reduce a story down to a checklist of stuff, I feel like they’re cheating themselves. It’s like taking what’s hopefully a good meal and arguing about whether the beans are fava or lima instead of enjoying the food and the conversation.

Re Jupiter Pirates, I now have a lot more sympathy for creators and continuity folks than I did way back when I started cataloging Star Wars planets. There are continuity mistakes in Jupiter Pirates as well as things where I didn’t think something through and had to either retcon it or hope nobody notices. As a reader, you think “How could they mess that up?” But as a writer, you find out it’s all too easy.

Unless you’re Tolkien, world-building is like a matte painting – you only fill in the stuff you need behind the action, and the rest is white canvas, and when you move onto a new scene you roll up one painting and break out another. But sometimes you’re so focused on the story that you don’t notice the scenery doesn’t quite line up until it’s too late. I sometimes joke that I need another me for Jupiter Pirates, someone who’d be like, “Hey stupid, it took this long to get from Ceres to Jupiter in the last book, so what gives this time?” or who would come up with an explanation for how the Shadow Comet can have a brig in Book 3 when the map in Book 1 didn’t show one. Being god, as you put it, turns out to actually be a lot harder than inheriting a framework and being free to work within it.

Speaking of Jupiter Pirates, the second book in that series, Curse of the Iris, comes out this December. You mentioned on the JC Forums that this book “points to where the series is going”, and I wonder if you’d expand on that some. The first book is a great little adventure story, but I admit that I hadn’t really given any thought to what sort of themes or meta-plot you’re working with here. Do you have any kind of mission statement around which the overall JP premise is built?

It begins with families. For me storytelling is primarily about characters banging into each other, with outcomes good and bad. Since I’m writing about teenaged protagonists, the family’s a really great arena for that. For the uninitiated, the “engine” of Jupiter Pirates is that the captaincy of the Shadow Comet (that’s the family starship) is passed down from generation to generation. Tycho Hashoone’s grandfather Huff chose Tycho’s mother Diocletia as his successor, and Diocletia will in turn choose either Tycho, his sister Yana or their brother Carlo as the next captain. So the three Hashoone siblings have to work together as crewmates, but they’re also competitors, since there can only be one captain.

What interested me was combining that relatively straightforward competition with the fact that the characters will change enormously over the six books – you’re a very different person at 18 than you are at 12. That opened up a bunch of narrative possibilities for me. As children Tycho, Yana and Carlo all want to be captain and pursue that goal within the traditions of their family and their trade, but as they become young adults they’ll start asking pretty big questions about what they actually want and what they’re willing to do to get it. There’s a push-pull there that I find interesting as a storyteller.

Plus there’s a tension surrounding piracy and privateering – working for a government under the strictures of a letter of marque. When Tycho and Yana were babies, there was a big space battle that led to the government of Jupiter outlawing piracy but allowing some of the Jupiter pirates to become privateers. Huff Hashoone remains an unreconstructed pirate, while Diocletia Hashoone was raised as a pirate but forced to become a privateer and is trying to maintain the family tradition in this new world. And the kids were raised as privateers while hearing tales of a golden age of piracy that’s now gone. There’s an interesting family conflict there already, and as the story progresses, Tycho will begin asking about how the shift from piracy to privateering happened and how his family was involved. He’ll ferret out secrets he might prefer not to have known, and find himself caught in the same intrigues. I showed some of the pieces of that in Hunt for the Hydra, but Curse of the Iris is where they start fitting together.

HarperCollins has billed Jupiter Pirates as a cross between Treasure Island and Battlestar Galactica, which is true and a lot better marketing than how I’d describe it, which is as a cross between Patrick O’Brian and The Sopranos. The latter was a big influence on me in thinking about the series – imagine smarter versions of Meadow and A.J. navigating the waste-management business and how that might have played out over time. Only in outer space, of course.

Hey, what gives? That was only two questions! Stay tuned for part two this Monday, where Jason talks more about Edge of the Galaxy, working with Story Group, and that whole “Sheev Palpatine” business.

2 thoughts to “Jason Fry Keeps Talking To Us: “World-Building is Like a Matte Painting””