It’s a pitch-perfect subplot, and sets just the right tone for how I hope this sort of element is handled in future stories. It’s also a decisive part of Zare’s burgeoning anti-Imperial sentiment, without being preachy or oversimplified. He wants to stand up for Frid and Hench because they’re his friends, but doing so could sabotage the lives of his several human teammates, and they’re his friends, too. Fighting a prejudiced individual is easy; fighting a bad system is infinitely more complicated.

And of course, all this is going on without the slightest acknowledgement of the fact that Zare and his family are black. People of color exist, obviously, in the Galaxy Far, Far Away—though not always to the extent that they should—but “People of Color”, as a demographic, do not; they’re all just humans. Furthermore, Zare isn’t just human, he’s upper-middle-class. His family has benefited enormously under the Imperial system, and for him to willingly separate himself from that carries no trace of poetry or irony, because in the GFFA, his face is every bit as representative of The System as is Palpatine’s.

Which bring me back to our system, and this tweet:

I can't stress enough that if you want kids' novels starring POC protagonists, buy the ones that exist. You have to vote w/ your dollars.

Jen Heddle is the Senior Editor at LucasBooks, and to be clear, this piece is not about her. Everything I’ve seen out of her tenure suggests that’s she’s an authentic lover of this franchise and every bit the ally of diversity in SW publishing you could want her to be; she even granted me an interview on Facebook on this very topic back in my pre-Eleven-ThirtyEight days. The above statement is almost certainly not an expression of personal preference, but an acknowledgement of an unfortunate reality: despite the fact that utterly nothing about Edge of the Galaxy would change if it had a white kid on the cover, the fact that it doesn’t means it will be viewed by the publishing industry as a “special interest” book, the same way the coming Wonder Woman film will be a “special interest” superhero movie, or Ms. Marvel is a “special interest” comic book. If they do well, we will see more of “that kind of thing”, by which I mean stories about POCs/women/Muslims/whatever, and if they don’t do well, it will be taken as evidence that fans don’t want those stories; they want straight white able-bodied American-accented Christian men instead.

And do I really, really have to say this? Apparently, I do: that’s horseshit.

I’m not here to criticize the free market (no, that’s what my old blog was for); naturally if one product does poorly and another does well you’re going to see people duplicate the successful one. It should never be forgotten that Star Wars is a business. The problem here isn’t that publishers (and toy makers, and film studios) want to make the biggest profit they can, it’s that when people of color (or any other so-called “special interest”) are involved, the entire product is hung around that demographic’s neck for good or ill. Stories about women are women’s stories, stories about black people are black stories, but stories about people that look like Brad Pitt or Matthew McConaughey are just stories. Everyone is supposed to enjoy them, so their prospective audience isn’t limited to people that look like they do, so they do better. But when you contextualize a book about Zare Leonis as a POC book instead of just a Star Wars book, you’re giving up on the sale before you even attempt it.

It’s also illogical—suppose for a second, and I hate myself for even saying this, but suppose for a second that Jason Fry is just a shitty author. Servants of the Empire gets a bad reception, which turns into a bad reputation, ergo, no more books like that. “Like that”, of course, can only mean Zare’s skin—not the sports content, or the pacing, or the lack of wisecracking sidekicks with dark secrets. But it’s not our imaginary shitty author’s fault; it’s a POC book! Black kids don’t like Star Wars, it never had a chance! And even with a great book like EotG actually is, sometimes things just don’t work out—lack of interest in the Rebels brand, confusion from kids who only know The Clone Wars, etc. That would still be an unfortunate reason to disfavor stories like this one, but it would at least make a little sense—and far more than blaming it on the black kid.

So it’s not the greatest business sense, nor is it even good regular sense—but why stop there? It’s also, purely and simply, immoral. 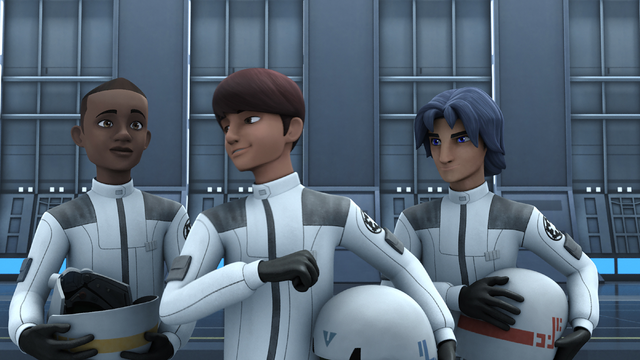 Because yeah, I can admit that a lot of people will probably look at the cover of this book and pass, whether for prejudicial reasons of their own or simply because that’s what generations of western marketing has trained them to do—“oh, black kid? I’m not the audience for this.” But they’re not making toilet paper or crayons or hot dogs here, nor are they some tiny independent production house. Lucasfilm is a business, but its product is human culture. No matter what direction it’s steered in, the Star Wars franchise is a nigh-unparalleled profit machine; so would it kill them to exercise a little social responsibility while they’re at it?

Zare Leonis is the inheritor of a legacy of pushing the envelope that goes all the way back to Lando and Princess Leia, and hell, back to Lt. Uhura before them. Showing us a universe where race and gender don’t matter and making everyone love it anyway is Star Wars’ greatest superpower, not because it’s especially good at it (in fact, sometimes it downright sucks at it), but because it can afford it. It’s hard to know exactly what publisher expectations for Edge of the Galaxy were, or whether it’s been meeting them even a little bit, but I’d be willing to bet it’s not a matter of profit versus loss, but of profit versus more profit. And even if I’m wrong, to offer countless children the chance to dress up like Zare (or Ezra, or Kanan, or Sabine) this past Halloween and feel like those characters are there to represent them should be worth more than that potential loss, as is the chance to give countless white kids a black face to empathize with.

Star Wars, as a brand, has the power to make money no matter what it puts out, so what possible reason could they have not to get out in front of the pack a little? As a badass old white guy once said, with great power comes great responsibility.