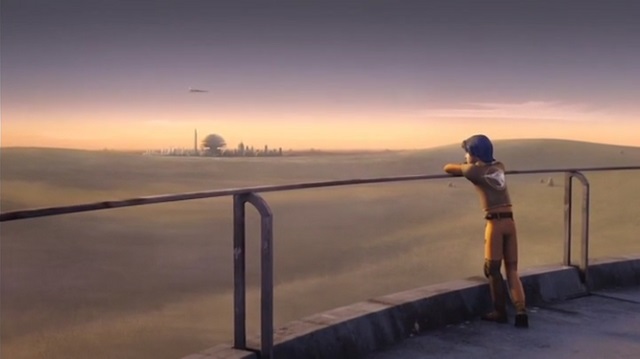 Another element “Out of Darkness” and “Empire Day” have in common is the delicate peeling back of the curtain obscuring the main characters’ backstories; Sabine’s in the former and now Ezra’s in the latter. The latest episode “reveals” Ezra’s parents for the first time, by name, voice, and deed if not by sight. For those of us who were lucky enough to see “Empire Day” online, the past week has produced lots of speculation regarding the identities and fates of Ephraim and Mira Bridger; some suspect that Ephraim might be a rogue clonetrooper, while the timing of Ezra’s birth and his high Force-sensitivity also leave room (though not much) for him to be the child of a Jedi.

My question is, does it really matter in the end? The mystery of Fulcrum’s identity will almost certainly be pivotal to the larger story this show is telling, but must that apply to Ezra as well? If his parents were just two random dissenters as opposed to, say, Rex and Bultar Swan, does that help or hinder Rebels‘ larger themes? Given the lengths to which the show has gone to make Lothal seem like just another Rim backwater, is there anything to be gained by tying Ezra more directly to galactic history?

Ben: Ezra’s past was one of the mysteries Rebels implied but never directly addressed for some time. All we knew until “Empire Day” was that he grew up on the streets of Lothal, fending for himself, opposed to the Empire but his experiences having hardened him against interpersonal relationships beyond loose friendships. Like the rest of the Ghost‘s crew, he had a past he preferred not to talk about. “Empire Day” moved from implication to exposition, showing us not only Ezra’s old home, but revealing information about his parents, including their voices.

The revelations of Ezra’s history serve his character in the same way hints about Sabine’s served hers. It gives him motivations, depth beyond just being a street rat. We know why he is so bitter about the past and the Empire. Where things get more subjective is if it serves the greater story beyond that, especially if his parents wind up being someone seen in previous canon. But will they be?

All we know as of this writing is that Ephraim Bridger is voiced in his flashback appearances by Dee Bradley Baker, the same actor who played the clone soldiers in The Clone Wars. Does that mean that Ezra’s father was a clone? It’s not entirely baseless speculation, but DBB voiced an Ithorian bartender in the same episode, does that mean his father is an Ithorian? And who on Lothal could his mother be? Was she a Jedi or just a random woman? 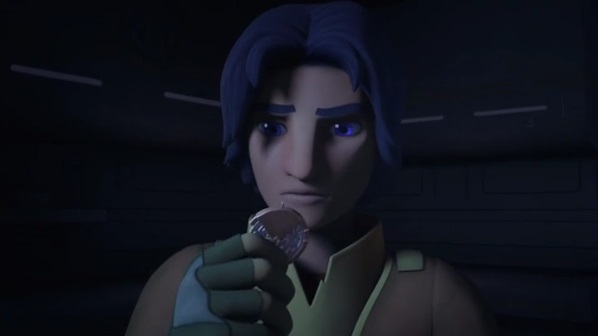 In the context of the larger story, these details do not really matter. Whoever Ezra’s father was, he has been missing from Ezra’s life for a long time, having more effect on Ezra by his absence than his presence; the Ghost’s crew is more concerned that Ezra come to terms with his past than be defined by it. From an out-of-narrative standpoint, linking Ezra to characters we have seen before would really only go against what Dave Filoni and other creative minds behind this series have said from the beginning: the galaxy is big enough to house all sorts of narratives that do not have to be connected. Not every protagonist has to be someone special from birth.

Rebels has benefited from its distance from the larger narrative, allowing its characters to work in a near-vacuum. Lothal is a small place in a large galaxy, and not everything has to be tied back to the movies or previous stories. While having Ezra’s father be a clone is something I could see happening, I would prefer it not be, and I would be very disappointed if it turned out to be Captain Rex or another notable clone from the past. It’s the sort of connection that does not serve the larger narrative except as fanservice on a level that proves more distracting than interesting.

Jay: There’s something to be said about great change being wrought from regular folks. Use whichever cliché you’d like: the short man casts a tall shadow, a noble spirit embiggens the smallest man, etc. There is a significant narrative cost, I’d argue, to making a big deal out of Ezra’s parentage. Ben argues it’s irrelevant and I’d take that a step further.

In this episode, Ezra has some sort of mental flashback to lessons taught by his parents — that’s fine. Even as someone who lived as an orphan for half of his years, his parents meant something to him. But by making Ezra’s parents into somebody we already know, whether Captain Rex or someone else, the writers would run the risk of turning Ezra’s story into an extension of their story. This harms the big-galaxy feel that Filoni’s mentioned being fond of, but also marginalizes Ezra’s own agency and growth. He’s learned some valuable lessons being part of the Ghost crew and he’s grown by having to make some difficult choices. He’s learned to put others ahead of his own interests. Let’s not undermine that by making him a pawn of destiny — even if he is a Force-sensitive.

Everyone has larger stories, stories that established who they are and how they got to join the Ghost crew. Hera’s is as yet untold, Kanan’s is unfolding through novels and comics, while Sabine and Zeb have given hints at their larger stories. Ezra can and should have a story too — but the story of his parents should be Ezra’s.