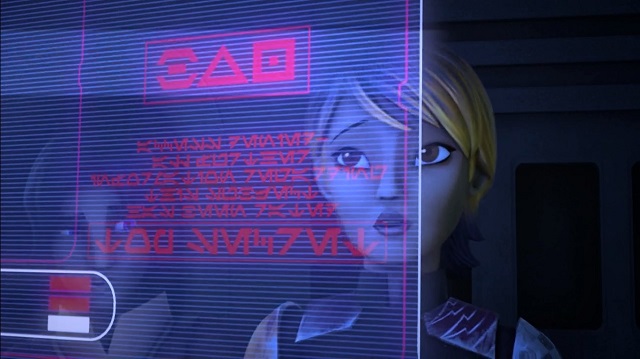 It’s always fun to speculate about what our favorite TV shows have ready for us. Shows like Twin Peaks or Lost turned the art of teasing and fueling fan speculation into an art, and why wouldn’t Star Wars Rebels get a piece of that cake, as small as it might be? The serial nature of Rebels, unlike the anthology structure of The Clone Wars, lets Dave Filoni and company drop hints and seed future storylines in a very organic and natural way. The traitor Senator Trayvis appears twice in the background before the episode that features him, for example, and these appearances hint towards his eventually revealed Imperial allegiance. Most serious fan speculation so far has been directed towards the identity of the mysterious Fulcrum, the main intelligence source of the Ghost crew and apparently also the hand directing Hera Syndulla’s actions, probably the main mystery of this season. Although recent spoilers appear to be strongly pointing in one direction, we prefer to wait until we see it with our own eyes, so we are all here awaiting the official reveal of Fulcrum’s identity in the season finale. But there’s another really interesting theory that’s been gaining adepts among fans because of how intriguing and macabre it is. Let’s call it the Base Delta Zero theory.

Most of the audience probably missed the first mention of Base Delta Zero in Rebels, as it’s a pretty hard one to spot unless you already know what to be looking for. In episode 1×03, “Rise of the Old Masters”, our heroes are watching Holonet News when Senator Gall Trayvis interrupts the signal to broadcast the news that Master Luminara Unduli is alive and in the hands of the Empire, the main focus of the episode. When the pirated signal goes out and Holonet News returns, we can hear a brief fragment of a sentence before Sabine turns off the holoprojector: “–and another successful planetary liberation utilizing the Base Delta Zero initiative.” The regular fan probably didn’t think anything of it, considering the fragment just some random mumble jumble and promptly forgetting all about it. The old timer? Well, let’s say my wife had to elbow me a couple of times to get me to stop laughing.

So what’s this Base Delta Zero thing and why is it getting people talking? It’s a very, very old term, appearing for the first time in one of West End Games’ sourcebooks, The Imperial Sourcebook (1991), in a description of the role of the Imperial Navy. The text explains that, when the proper political authorities command it, the Navy can execute a series of punitive attacks upon planetary targets. These attacks have different names according to the mission, but there’s one that never changes so that there’s no possibility of confusion when it’s ordered: Base Delta Zero, meaning the complete destruction of all assets of production, including all factories, arable land, mining areas, and of course all droids and sentient beings. It’s, basically, planetary bombardment hard enough to devastate the planet. The term gained popularity among roleplayers (sometimes being used as the equivalent to Dungeons & Dragons‘s “rocks fall, everyone dies“: many GMs have threatened, in jest or in desperation, that “Star Destroyers show up, BDZ happens, everyone dies”) and eventually jumped off the gaming table and into the greater fandom, especially among Expanded Universe fans: I can’t count the number of times I’ve read a blog entry asking for a Star Wars author to “BDZ that guy” or a forum post asking a moderator to “BDZ this thread”. So, knowing what it entails, what does this Base Delta Zero initiative in Star Wars Rebels mean?

At first, it looked like the Base Delta Zero mention was just an in-joke, a way to get older fans to chuckle by realizing what that Imperial “liberation” actually was. But then BDZ kept showing up. First, when Sabine accesses Tseebo’s brain implant during 1×06, “Empire Day”, and sees information about an ominous “five year plan for the Outer Rim” (exactly the years until the Death Star becomes operative, by the way) we get to see a screen popping up (see the top of this piece), with a large ACCESS DENIED sign and three big red characters: a letter B in Aurabesh, a Greek capital delta, and a number zero, again in Aurabesh. Even the additional material has mentioned Base Delta Zero, with a brief mention and description appearing in Sabine’s My Rebel Sketchbook, where she describes BDZ as “the total annihilation of a target’s population”, something very close to West End Games’ old definition. So what does this all mean? Is the season going to finish with the Empire bombarding Lothal and reducing it to ruins? What a fantastic visual that would be, right? What a great way to show the power and evil of the Empire. But let’s look at the facts and consider how likely is it to happen. Let’s speculate!

On one hand, we know that Ezra’s broadcast during 1×11, “Call to Action”, has interested the higher ups in the Empire, and we still haven’t seen the direct effects of his call to arms. Will the Empire consider the Lothal rebels a threat important enough to order the orbital bombardment of the planet? Grand Moff Tarkin, he who won’t hesitate to order a Core World destroyed just to make an effective demonstration, is now in direct command of the Lothal theater. Will the Empire try to stop that fire from spreading across the galaxy by making Lothal an example? Is the death of Lothal going to become the rallying cry that’s going to eventually cause the birth of the Rebel Alliance? We also have to consider the fact that we don’t really know why the Empire is so interested in Lothal; Lando Calrissian seemed surprised to see such a strong Imperial blockade and Ezra mentions that no one seemed to care about the world until the Empire showed up. The most commonly accepted theory is that the Empire is digging for kyber crystals in Lothal, looking for the focusing crystals that will eventually become part of the Death Star (that five-year plan again!). The trivia gallery to 1×08, “Path of the Jedi”, confirms that there are kyber crystals in the crust of Lothal. What would stop the Empire from killing everyone on Lothal if all they want is one of its natural resources and the populace is getting dangerous? We saw in the prequel novel A New Dawn that certain individuals inside the Empire are not above destroying worlds if they really want to obtain, well, crystals. Was the crisis on Gorse foreshadowing the eventual devastation of Lothal? And we also have the fact that we have never seen the mysterious Governor Arihnda Pryce of Lothal. She’s been mentioned several times and has briefly appeared in the pages of the first Servants of the Empire young adult novel, set one year before the start of the series, but she’s never been on screen. Some of us used to suspect that she would end up being revealed as Fulcrum, having been helping the rebels from her official position, but that’s no reason to have her off-screen for one full season. Has she sold out her planet? Has she been evacuated before the forces of the Empire reduce Lothal to rubble?

On the other hand, would the Senate allow something like this? The Empire certainly seemed worried enough about the Senate’s response to their traffic of illegal disruptor rifles during 1×01, “Droids in Distress”. Plus, from an out-of-universe perspective, if performing a Base Delta Zero is something possible in the new canon, then the Death Star is nothing but pyrotechnics. If the Empire could simply have wiped out entire star systems using only their fleet, what need did they have of the Death Star? Why is the Geonosian “Ultimate Weapon” something scary enough for Poggle the Lesser to think that if the Republic found out about its existence they wouldn’t stop until they were destroyed, if a few Star Destroyers can effectively wipe out the life out of a world anyway? Just because it’s big and looks scary? In the Star Wars RPG the existence of Base Delta Zero was useful: the game was set between A New Hope and The Empire Strikes Back, in a time with no Death Stars. What the Imperial Sourcebook told you was: “don’t worry, Game Master, if you have need of a Death Star, here’s how you can do something similar without having to resort to one”. So for anyone that wanted the thrill of the Death Star environments, they created some spherical ships called Torpedo Spheres; and for anyone that wanted the threat of planetary destruction, they created the concept of “Base Delta Zero”. But in the official storyline of the saga, the addition of anything robbing the Death Star of its uniqueness, especially before its first appearance and the destruction of Alderaan, should be carefully considered.

So why tease Base Delta Zero if it’s not going to be used, after all? Well, for all we know, it could just be an in-joke: Pablo Hidalgo, of the Story Group, was a staffer at West End Games, after all. Or maybe they just seeded it as a possibility, maybe not for the end of the season but perhaps for the series finale, or just as a threat hanging over the heroes’ heads, or as a loose end to grab if they eventually decide to do something drastic to Lothal. Or maybe the new Base Delta Zero is less spectacular and it “just” represents the bombing of a city: after all, Sabine merely writes “a target” in her diary, not specifically a planet.

We can’t know, of course. We are merely speculating, after all. There are many possibilities and only time will tell if the Rebels guys and girls are going to stick out their tongues to the “it’s just a kids’ show” crowd by exterminating every single sentient being (and every single adorable loth-cat) on a civilized world we’ve been getting to know over many episodes. And anyway, at the very least, the Base Delta Zero theory has achieved one of its objectives: keeping us intrigued and entertained.

3 thoughts to “Base Delta Fulcrum: The Lothal Conspiracy Theory”