Ben: When Star Wars Rebels started, we were privy to a very small knot of rebellious souls. A former Jedi turned drunken gunslinger, a Lasat with a chip on his shoulder and temper to match, a Mandalorian who loved to paint as much as fight, a street-rat orphan who stole for a living and a cranky patchwork astromech droid, all held together by a Twi’lek pilot who kept them pointed at the Empire instead of each other. The season went on; we got to see more of their personalities and hints of backstory, and caught occasional glimpses of a wider picture, of a bigger plan than just the group on Lothal. It wasn’t until the finale of the first season, however, that we finally saw what that meant.

We had hints from the beginning that the Lothal rebellion was just one of many in existence. Agent Kallus’ report to the Inquisitor at the end of the show’s pilot told us as much. The segmentation of the organization, keeping each cell separate with as little knowledge as possible of the others, is intelligent strategy taken from real-life resistance groups, such as the French Resistance in World War II. You cannot betray what you do not know. While Lothal seems a rather unimportant backwater world, the Empire is there, and that is (seemingly) enough for Hera. But this would be far from a normal cell, and their impact would be far larger than Hera would ever have guessed at the beginning.

The spiraling escalation of conflict was kicked off when Kanan unveiled his lightsaber during the mission on Kessel. The threat presented by a Jedi caused Kallus to contact the Inquisitor, the threat of whom, in turn, forced Kanan to accelerate Ezra’s training and forced the team to become more daring and bold in their activities. Their continued success (or at least lack of defeat) garnered the attention of Grand Moff Tarkin, whose capture of Kanan brought several unseen teams of rebels together, including the heretofore masked and nebulous Fulcrum, to free him. That rescue and the threat a united rebel group presented caused the Emperor to send Darth Vader in order to restore order.

It is a common axiom, first said by Obi-Wan Kenobi in the very first Star Wars film, about taking first steps into a larger world, a world beyond initial perceptions or imaginations. When Ezra first stepped onto the Ghost with the intent of stealing back the cargo he had been “liberating” from an Imperial supply convoy, he never could have dreamed that soon he would become a part of that crew, and soon after a Jedi apprentice launching a rescue mission to save his master. And it would have never entered his darkest nightmares that his efforts and ideas would bring the attention of the Dark Lord of the Sith to Lothal.

Rebels’ first season was very reminiscent of A New Hope, in that it was the story of a boy who was taken out of a humdrum life and thrust into adventure and danger, and the ultimate triumph of a ragtag band of misfits against the oppression of the Empire. While Ezra stopped short of blowing up a Death Star, the ending of the season was an undeniably triumphant one. But the Empire is still bigger, still greater and more evil than we have seen to this point. Losses like the ones they suffered through the first season hardly make a dent in the infrastructure that has been built in the decade and more the Emperor has been in power. It is the audacity of what Ezra, Hera and the others have done that will ultimately draw wrath. If the first season was A New Hope, then the second season promises to be when the Empire strikes back.

What might happen in the season to come? The Empire must have success, because Darth Vader is on the scene, and neither the creators nor the fans want to see Vader’s star diminished in any way. Will the season open with a battle and the rebels forced to flee as they do on Hoth? Will Ezra be forced to confront the dark side as Luke was on Dagobah? Will the whole crew survive Vader’s scrutiny? Only time will tell. But the door is open now for far bigger and more dangerous stories to take place around our crew—they only have to be told.

Adventure and Excitement: the Audience Craves These Things

Jay: The first season of Rebels introduced our merry band of revolutionaries. We got a feel for each of the characters and we got very familiar with Lothal as a background, though not in too much detail. As is often said, the first season of the show is much like A New Hope. Light, fun, and it proves the concept works. Now that the show’s done this, we need more. Though the character-development episodes are crucial in giving credibility to the show’s tenser moments, the best episodes have been those that upped the stakes. Many have called for the second season of the show to be the Empire Strikes Back season, and Dave Filoni hinted in a recent interview that ESB is what we will get. But what does that mean?

First, we know that Vader has arrived on the scene and the show’s creators have promised to treat him like the earth-shattering menace that he is. Second, Pablo Hidalgo told us in the latest “Rebels Recon” that the Ghost crew would finally be visiting other worlds. Third, we’ve had several hints that change may be afoot on Lothal… from mentions of Base Delta Zero to Kallus’ report of rebellion spreading on the world. It’s probably not too much of a stretch to imagine that our heroes will be leaving Lothal in the very near future, though whether it’s due to a defeat at Vader’s hands or the desolation of the planet is still up in the air.

People often compare the show to Avatar: The Last Airbender, and for good reason — let’s not forget that Dave Filoni was a writer on the show, and that the show’s own creators compared the second season of the show to ESB. Second Acts are usually setbacks for the protagonists, a time for them to sit back and take stock. This kind of philosophical reflection is best achieved through the Empire winning the day on Lothal, not destroying it. Vader can either outplay or outmuscle the heroes (preferably both), and their supposedly diminished threat will both highlight Vader’s capability as well as remove the need for him to be a persistent player that the characters have to outfox in every episode. There’s an added bonus too: the show’s creators have shown a penchant for circular composition, and what better way to continue that trend than to have the heroes eventually return to Lothal to save it?

But for now, the heroes need to be driven off. They need to take inventory. Hera needs more of a chance to shine as one of the nascent Rebellion’s most capable cell leaders, and I would desperately like to see her have to make a tough moral call that revolutionaries often have to make between ideals and effectiveness. Kanan needs to figure out who he is — he showed moments of being rather un-Jedi-like in the season finale, and he needs to confront the magnitude of the task before him. If he’s not taking up the burden of restoring the Jedi (that’s someone else’s mantle, no points for guessing who), then what’s his job? Sabine has to deal with her past, and the audience is definitely curious about her relationship with the Imperial Academy that resulted in her rather expressive form of disobedience. Ezra’s learned how to be heroic, but he’s also learned that he’s mortal and his plans can put people at risk — it’s his time to grow up. Zeb has to outgrow his comic personality, since we’ve only seen brief moments when he discusses Lasan and when he learns to care about Ezra. As for Chopper — no, he’s fine the way he is.

The next season is the chance to be different. To see different worlds, to see different responses to the Empire. Lothal has been a great backdrop for now, but we need to move on. Vader is our palate cleanser: he can wipe the status quo of the first season clean. That doesn’t mean forgetting the character growth and the important setup that the first season provided — but it means going further, taking the show to the next level as it were. We’ve seen hints of that in the concept art posted of season two, though I won’t spoil it for anyone who hasn’t seen the last “Rebels Recon” yet.

As for Ahsoka, the big elephant in the room: use her, but use her wisely. I expect her to have more of a role than Vader, and she should: she’s with the good guys. But she’s an advisor now, a person the heroes can rely on when they’re in need of someone steadying. But they can’t rely on her too much, lest they lose the credibility they’ve gained in our eyes thus far. Ahsoka’s an important player in the new Star Wars continuity and has a huge fanbase, but she’s not the star of this show. I have faith that the creative team knows this, and they’ll use her when and where she’ll be most effective. 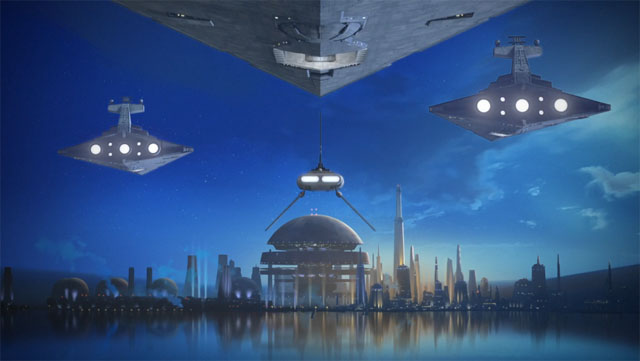 AN IMPORTANT MESSAGE BROUGHT TO YOU BY
ARS DANGOR: ADVISOR TO THE EMPEROR

Citizens! The rumors of a Jedi leading a revolt on Lothal are lies. Charlatans and tricksters who seek to prey on the best among us, to warp and twist their good intentions. The Jedi are dead and gone, brought low by their own betrayal of our most august Emperor. If any Jedi still existed, then why is Lothal still in loyal Imperial hands? What of the Jedi’s vaunted powers?

The Jedi are dead. Their dark arts have been laid bare and exposed by His Imperial Majesty’s most stalwart champion, Lord Vader. Even now, he journeys to Lothal to reassure the populace of the Emperor’s devotion. He will bring the perpetrators of chaos and violence to justice. Lothal now burns with the fire of rebellion, but Lord Vader will stamp it out underneath his boot heels.

Wherever these traitors and malcontents flee, the Emperor’s justice will follow. The Empire will bring these rebels out in the open, and there we will crush them.