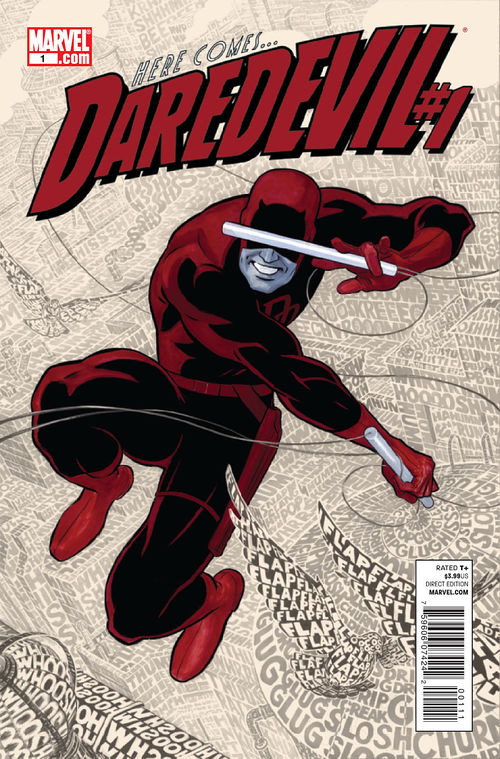 In past entries of Meet the Marvels we spotlighted the works of Jason Aaron and Kieron Gillen, writers of the new Star Wars and Darth Vader comics respectively. We are not going to discuss Kanan‘s Greg Weisman in this series, as Ben Wahrman already took a good look at his career, so we are going to finish this feature (for now) looking at Mark Waid, writer of the Princess Leia miniseries.

And boy, what a daunting task. While Aaron and Gillen are both excellent writers, their careers started relatively recently. But Waid is a real veteran. No, I’d even go beyond that label and say he’s a legend. Several comic book scholars (and this author) consider his seminal Kingdom Come series to be the dividing line between the Iron Age of Comics and the Modern Age. Yes: to some, he defined a whole era of comic book publishing, one marked by the marriage of the Silver Age’s sense of wonder and the Iron Age’s modern sensibilities. He’s written for extended periods almost every single iconic superhero, from Superman (co-writing the fantastic Superman 2000 proposal) and Batman, to the X-Men or Captain America, leaving his mark in all these well loved properties. He’s also very active in the community, never shying away from controversy and often offering a clear point of view on many polemical subjects. Some would call him larger than life. So how to choose just one issue to spotlight here?

We decided on taking a look at his 2011 relaunch of the Daredevil series, because it features several factors that we consider relevant to his work on the new Star Wars canon: it’s a Marvel comic, it’s a recent one, it’s a relaunch of a long-lived series, and it strongly follows a “back to basics” philosophy. Just take a look at that cover, at that carefree and smiling Daredevil: a declaration of intentions if ever there was one. If everything we knew about Daredevil was from the (otherwise excellent) works of Frank Miller, Brian Michael Bendis or Ed Brubaker, we could conclude that he’s always been a gritty, hardboiled, tortured and humorless vigilante, but Stan Lee’s original version of the Hell’s Kitchen hero was nothing like that. He was actually a fun-loving, two-fisted swashbuckler with a lot of charm and a sempiternal Errol Flynn smile. So after the past years (more like decades) of Daredevil angst, Waid decides to give our hero a respite and let him have some fun again, and the first issue of his still ongoing run is really something very special. 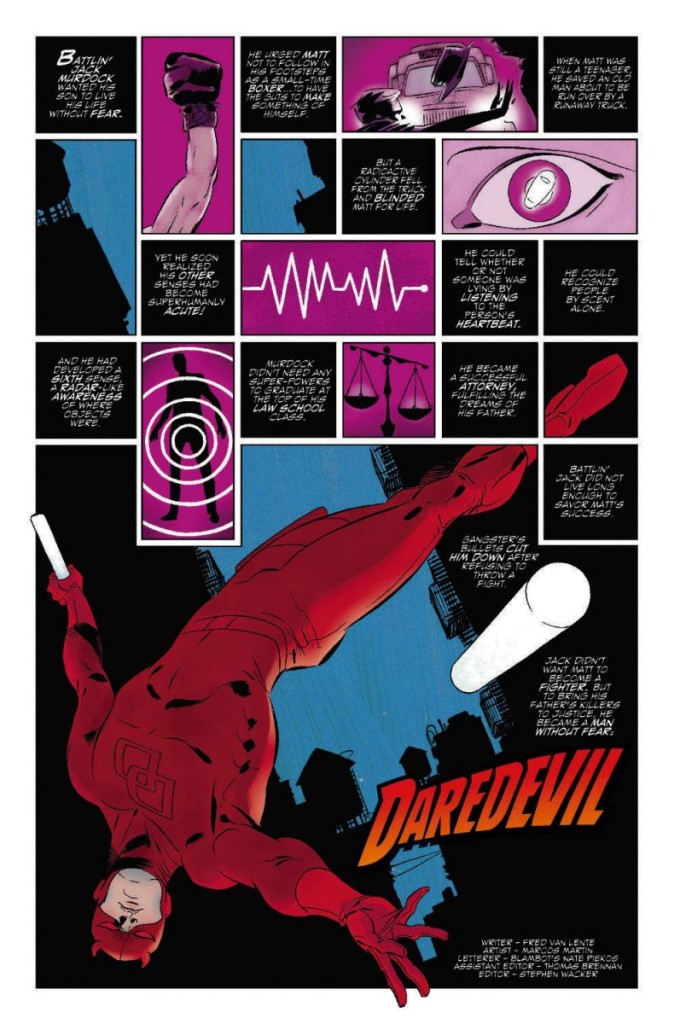 “It has been a miserable last few years. And every time I thought I’d finally hit the bottom, God somehow found me a bigger shovel”, says the hero while walking around town and talking to his friend Foggy Nelson. It looks like Murdock has finally realized how ridiculously painful and tragic his life has been, and he’s decided that enough is enough: it’s time for a new start. Waid shows that he’s confident in his new approach to the titular hero and playfully breaks every single informal rule about how the character should be handled (a future issue will have Matt and Foggy teasing Frank Miller’s writing style while sitting on a water tower, a signature visual element of Hell’s Kitchen during Miller’s run). Although he doesn’t ignore the title’s recent continuity, there’s very little mention of the events that happened before the relaunch; on the other hand, the drama from Daredevil’s secret identity being publically revealed by The Kingpin becomes the drive of much of the issue, although it’s used for humor instead of drama (you can buy an “I am not Daredevil” t-shirt, if you are interested).

After a tussle with The Spot (universally considered one of Spider-Man’s silliest villains but here shown as a real menace -everyone can change!) during a genuine mafia wedding (a fight that ends with Daredevil stealing a kiss from the bride to further cement his position as a swashbuckler), and after realizing that his half-public identity means he can’t be a trial lawyer anymore, Matt meets a character that’s going to become a huge part of his life: Assistant District Attorney Kirsten McDuffie, someone not afraid to call him “Daredevil” and even to throw paper balls to his face to see if he’s blind for real, all while appearing to not really give a damn about it. What a woman. After setting up the next issue, a sweet back-up story sees Matt dragging Foggy, his law partner and BFF, on a trek across town to pay his respects to his dead father, Battlin’ Jack Murdock. Foggy’s skepticism about the sudden and jarring change in Matt’s character echoes what most readers were thinking at that point: how can he be so happy go-lucky after all the drama that’s been happening in his life? In the past year his enemies made his wife crazy, he’s been posessed by a ninja demon and turned into his worst nightmare, and he even left town for a while to become a drifter (I told you guys the drama in the title used to be kind of over the top). Foggy, always the faithful friend, is worried this new optimism is just a façade and that his friend is actually about to crack. Although Matt denies all of this, the issue ends leaving us in doubt, making us wonder if this new approach of Matt’s is really what we thought it was. Can Matt really leave his years of pain behind? And, most importantly, are we actually caring about Matt’s happiness? Whoa, what happened here? We’ve just seen Mark Waid’s talent for making his characters both heroic and human without making them feel distant or arrogant, a talent that once helped him redefine The Flash for a whole generation. His Daredevil is likable: we want him to be happy for once. We understand he’s been through hell, again and again, and this time we want him to succeed. No little feat here.

(Even though this article focuses on Waid’s writing, we just have to mention Rivera and Rodriguez’s art. Their brilliant choice to present Matt’s radar vision via monochrome wireframe drawings lets us experience the world as Daredevil does, making him an even closer figure.)

So what can we expect from Mark Waid’s Princess Leia comic? First, we can expect a writer with hundreds of issues of experience behind him. We can expect someone that understands what “back to basics” ideally means: getting back to the core of the characters while also giving a fresh take on both character and setting. We can also expect someone not afraid of either big stakes adventure or personal conflict, not afraid of drama but also not afraid of just having some fun. And (although you’ll just have to believe me here, because Kirsten’s character takes a while to develop) someone that knows how to write strong women without turning them into caricatures, arguably the most important skill when writing Leia.

One thought to “Meet the Marvels: Mark Waid”