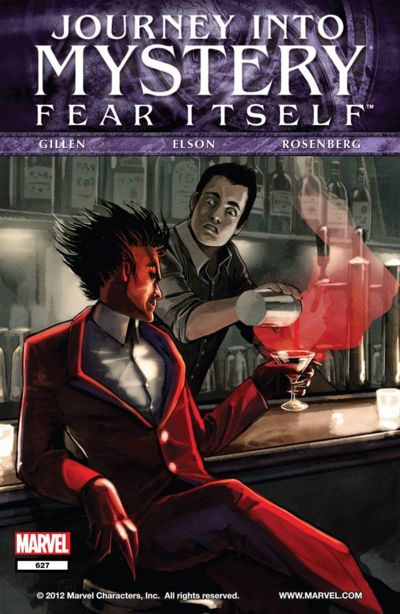 We continue with our look back at representative works penned by the new writers of the Marvel Star Wars comics. Last time we looked at Jason Aaron, and now we are going to take a look at Kieron Gillen, writer of this week’s Darth Vader. Given that he’s writing one of the largest villains in the history of fiction, we’ll take a look at one of his most villainous series: the critically-acclaimed Journey Into Mystery.

In 2011, Gillen was already a popular author and was slowly becoming one of Marvel’s staples. Coming from the world of media journalism, his New Games Journalism manifesto had tried to adapt the new journalism model to the world of video games. His first real comic, outside of comic strips for video game magazines, was called Phonogram, a delicious mish-mash of pop sorcery, britpop and true love for anything pop that he authored alongside long-time collaborator Jamie McKelvie and that turned him into someone to keep an eye on. After writing some one-shots for Marvel, he co-authored comic books with well-established writers like Warren Ellis or Matt Fraction and eventually took the reins of the Thor comic book for ten issues. After a long and well-received stint in Uncanny X-Men, Gillen returned to Thor, but to everyone’s surprise the book was renamed to Journey Into Mystery (the name of the comic where Thor and the Asgardians first appeared) and, well, stopped being a Thor comic.

So what was Journey Into Mystery about? Well, it was “the Loki comic”, but it starred a Loki that had nothing to do with the Loki in the Avengers movie. No: this God of Mischief had little to do with the Tom Hiddleston portrayal we all fell in love with. This is a Loki that has died and has been reborn as a pure and innocent kid. This is a good Loki that knows that his evil self is biding his time and waiting for a chance to return, and he’s wondering if he can escape his own legend. Does Loki have to be Loki? Can Loki change or will mythological inertia always end up winning the day? After being introduced to this new status quo in the middle of the Fear Itself crossover, Kid Loki starts traveling through the Nine Realms in an attempt to save Asgard from the intimidating forces of The Serpent, Odin’s forgotten (and evil) brother. He goes everywhere up and down the Ygdrassil tree and rubs elbows and crosses swords with all kinds of classic Thor villains, from Hela to Surtur.

But just like Journey Into Mystery is not a Thor comic, the issue we are going to spotlight (issue #627) is not even a Loki issue. This comic is a one-shot featuring one of the comic’s main secondary characters, also one of Marvel’s biggest monsters: we are talking about Mephisto, one of the many devils in the Marvel universe that claim to be the real Satan. (Yes, the guy that magicked out Spider-Man’s marriage, but that’s neither here nor there. Don’t hate the player.)

The comic starts by telling us that there’s a story bartenders tell about the devil: that every night, at closing time, he chooses a bar and walks in the door. He’ll want to talk about his day. If you listen and survive, he’ll give you a tip. The story isn’t true, but occasionally it amuses Mephisto to play along. And that’s what he does: the issue begins with Mephisto walking into a bar, asking for a drink and telling the terrified bartender how awful his day was (and how sick he is of the Fear Itself crossover). The poor bantender has to listen to Mephisto complaining 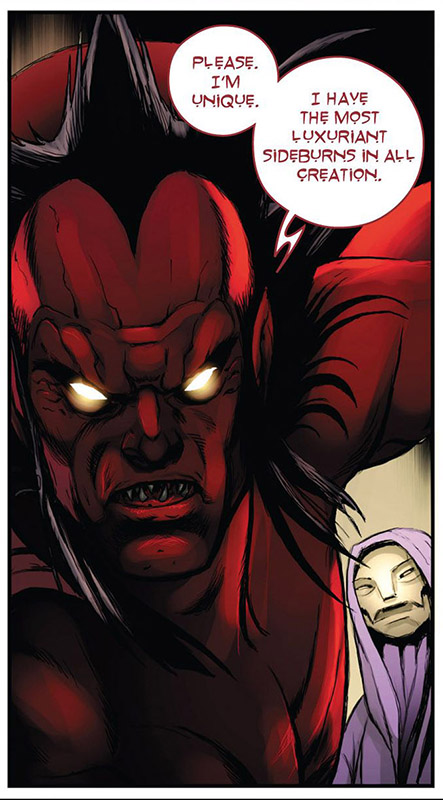 about most of Marvel’s mythological figures. This issue is certainly heavy on continuity and Marvel mythology, but uses it well: the non-initiated feel like the bartender in the story, hearing names like “Shuma-Gorath”, “Council of Godheads” or “Living Tribunal” being thrown around and feeling a sense of wonder at how fantastic the universe is without ever getting really lost. Gillen had been writing Mephisto for a couple of years already and he had developed an interesting take on him: witty, suave and cultured. The devil you want to sign a deal with. A sincere admirer of Loki for his cunning and craftiness, and perhaps the only one to actually miss the old Loki. The issue has some magistral scenes, like Mephisto giving Nightmare (an old Hulk villain very annoyed that the bad guy in Fear Itself is basically stealing his schtick) some apparently sincere coaching and advice, or a look at how all the demon lords surround Satan’s throne without anyone daring to sit on it for fear of becoming a target.

So, what can we expect from Gillen’s Darth Vader series? Honestly, a writer that just knows how to write his villains. His takes on Loki and Mephisto or his take on Sinister over Uncanny X-Men are pitch perfect, finding what makes each character ring true and then using it to its full potential. There’s not much more I can say about it other than “oh boy, we are in for a treat”.

Oh, and if you want to know what kind of tip Mephisto gave the bartender, I’m afraid you’ll have to read the issue. Read all of Journey Into Mystery, while you are at it. You can thank me later.