Ben: Star Wars Rebels‘ first season was a rather brisk affair. With only sixteen episodes’ worth of run time total, we were delivered character introductions, development of those characters, decisions with consequences and plot twists, and a satisfying, rousing conclusion that led nicely into a future full of possibilities. What that meant in terms of storytelling was there was little to no room for padding; every episode paid off somehow at some point, and plots that you might have thought for sure the storytellers had forgotten about wound up coming back.

The second season, by comparison, has had a good deal more than that, around twenty-two episodes, and of course we were all happy at the prospect of getting even more of the show and characters we loved. What I didn’t count on, and what caught a lot of people off-guard, is that the storytelling gears shifted. Rather than continuing to embrace the same taut pace, season two is taking its time with many things. We’ve been introduced to a load of new characters who all had the potential to recur, both good and evil, and a lot of hints and ideas about characters that may or may not pay off later on.

In “The Protector of Concord Dawn” for instance, we got hints about Kanan’s past during the war (directly referencing a current comic storyline, natch), as well as Sabine’s own Mandalorian pedigree, Hera’s position as Phoenix Leader, and the Rebel fleet’s scattered resources slowly coming together. All of it was following up on things that had been seeded earlier this season, but they’re far from concluded at this point. And we got a whole new faction of characters introduced in the Mandalorian Protectors, who might play a huge role later on, or might not play a role at all. Who knows?

The point is, season two is a slow burn compared to season one. I’m not sure if that’s a good thing, since it leaves a lot more hanging and dangling out to tease the audience without paying much off. But part of that might be because we’re just starting the season’s latter half, and everything might be so much better with hindsight. But right now, we’re left with tantalizing hints about a lot of different things and not a lot of conclusions or even concrete details.

I suppose I might be a little gun shy about this because of the influence of The Clone Wars. TCW had a bad habit of letting plots drag out over multiple seasons, and even within the same three- or four-part arc, to the point where a number of plots were still not concluded after six seasons and a movie. The last thing I want is for Rebels to fall into the same trap, especially after a first season that was so breathless. I have faith in the Rebels writing team that it won’t happen, but the fact that it’s even a topic of discussion doesn’t cheer me. 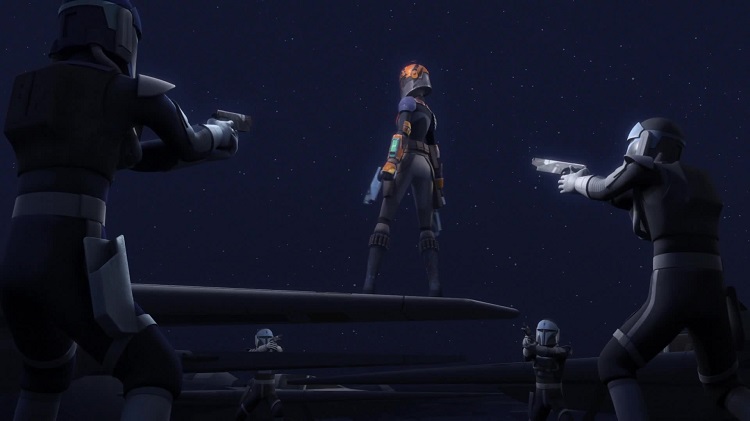 Jay: I think I’m a fan of the longer seasons. I do agree that the first season was tight and focused, with a very definite narrative arc: but that’s also a side-effect of the limitations the first season set. The first season was set on Lothal, which allowed for certain tightness in the plotting. As the conflict spreads to a more galactic level (as hinted in the Leia episode) and certainly to a sector-wide level, that unity of setting is going to have to go. And just as building a rebellion proceeds in fits and starts, so does the action.

As a result, we have a lot more episodic narrative than we used to. I don’t doubt that they’re planting seeds for the future. Now, The Clone Wars had longer seasons and rather sloppy, unfocused plotting. This also had to do with the nature of The Clone Wars as an ensemble show, which sort of lurched from plot line the plot line without caring about so much as even a chronological order. Rebels is not that kind of show, so I don’t think we really have to worry about it becoming as haphazard as TCW in plotting.

The bigger concerns for me are ensuring that seeds that are planted do come up and do pay off, lest we truly have dangling plot threads. And as the show becomes episodic, the dangers of the show becoming the Kanan-Ezra show become more and more clear. The virtue of an episodic narrative is the ability to change up the focus once in a while, so I’d like to see some of that. It was good to get another Sabine-centric episode for once. I can’t help but notice that this episode, like the Ketsu episode, added juuust a little bit more to Sabine’s still-mysterious backstory. We’re getting a slow drip of information, which is good. Just as Sabine isn’t likely to reveal her life story all at once, so too are we getting flashes of her past only as they’re relevant to the present. It keeps things interesting, suspenseful, and keeps us waiting for more. Let’s just hope there is more. And for heaven’s sake, let’s stop sidelining Hera every single episode. The B-wing episode is glorious and previews suggest we’ll see more of Hera in the future, and that’s great.

More episodes means more time to explore other characters. Next week I feel like we’ll learn a bit about Zeb. Let’s keep up the good pace. There are more episodes to work with, and thank goodness for that. But let’s make sure they’re used to their full potential. And let’s hope all the threads do come together and pay off. I think they just might. 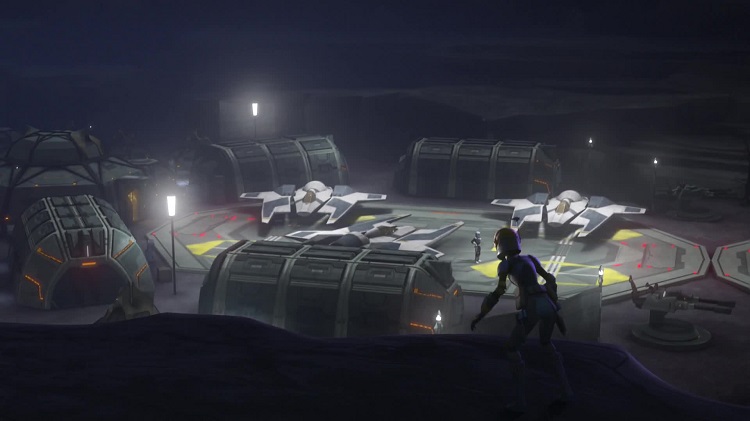 Sarah: I was initially underwhelmed by the first half of season two precisely because it felt so much slower than the much more fast paced season one. But the more I reflect on it, the more I think it’s good that Rebels is taking this season to be…..if not necessarily a “breather” than at least slowing things down a bit and building towards an explosive finale.

By virtue of being tied to a single planet as well as having fewer episodes, season one was certainly tighter, storytelling wise. At times it almost felt too fast; by the end of the season we’d been introduced to Fulcrum and the Ghost crew has finally met up with the Rebellion proper. While I appreciate that the Fulcrum plot wasn’t dragged out longer than necessary, I remember thinking, “Where are we going to go from here?”

Season two, in comparison, has escalated the story to a more galactic level and also has the benefit of an assured season three, which means it has the ability to start seeding long term plot threads. Furthermore, our rebel crew isn’t on their own on Lothal anymore; joining up with the larger rebellion means they aren’t required to do all the missions together. Instead, they can break off in groups of two or three to do missions, which has the narrative benefit of creating multiple story threads to follow as the show goes on. It’s almost starting to feel like The Clone Wars in that respect.

As Jay said, TCW was much more an ensemble show and jumped from plotline to plotline in a series of multi-episode arcs, which worked well for a series set during an intergalactic war. It made sense to jump from planet to planet and see how our various heroes were battling villains and saving the day.

But I wonder if Rebels couldn’t perhaps take a cue from TCW. While those sorts of multi-episode arcs don’t work quite work as well for Rebels (though the rebellion is growing, it is still mostly confined to the Outer Rim) I think the show would do well to adopt a more “ensemble” mindset when it comes to the cast. A more episodic approach to the series means the ability to focus on the individual characters. Much of season two has increasingly felt like the Kanan and Ezra show, and while I like those characters (as well as plotlines centered around Jedi/the Force) I would also like to see the rest of the Ghost crew get their time in the spotlight as well. We’ve had a couple of Sabine episodes, the fantastic Hera-centered B-wing episode, and next week looks to be focusing on Zeb. It’s a good start, and I hope Rebels continues to develop a more ensemble take on the show.

The slow drip of info and story is certainly a departure from the style of season one, and it definitely takes a bit of getting used to. But personally I appreciate my shows to have a slow burn to them—provided, of course, that the writers deliver on the stories they’re seeding. TCW didn’t always follow through with satisfying closure to story arcs, and left several plot threads dangling. Hopefully Rebels won’t end up in a similar situation and gives us the conclusion worthy of the narrative they’re creating.