Baze was terrified. Chirrut was not. In the instant before he’d risen from the bunker, he’d questioned his own wisdom: How might he separate the will of the Force from his will, his ego, demanding action where action was unneeded? But there was no doubt in his heart now. The Force expressed itself through simplicity, and all it asked of him was to walk.

I am one with the Force and the Force is with me.

The more we learned about him prior to the release of Rogue One, the more people found themselves asking this question. Cassian Andor even comes close to asking the question himself within the movie, and the answer Baze Malbus gives him isn’t much more definitive than the one Rogue One offers viewers: he’s no Jedi.

That much is clear—Chirrut is not currently, nor was he ever, a Jedi Knight. He’s part of a new group called the Guardians of the Whills; devout followers of the Force, but not necessarily wielders of it. Baze certainly seems content with his giant-ass cannon. But that’s not usually what people mean when they ask, is he Force-sensitive? What they mean is, could he have been a Jedi? Is the Force warning him when a blaster bolt is about to come his way? With training, could he levitate things, perform mind tricks, and so on?

Personally, I doubt it. But to look at what Chirrut can do and ask “what if?” is to miss the point of Chirrut’s abilities entirely.

Look at it this way: in Chirrut’s death scene (uh, spoilers), from which the above novelization quote is taken, he walks calmly across the beach to the master switch, knowing in his heart the Force is with him. Unlike his earlier action scenes, he doesn’t dodge a single bolt, nor does he attempt to fight back. The novelization reveals that he’s relieved, in fact, that the recent violence is finally behind him.

I submit that not only is Chirrut not a Jedi, but your typical prequel-era Jedi could not have done that walk. Jedi are gifted with the ability to affect the Force in line with their own ends, and throughout the prequels and The Clone Wars we see that gift taken utterly for granted. “If we have the power to fight in this war,” the Jedi Council seems to think, “clearly that’s what the Force wants us to do.”

This mentality, this arrogant supposition that their millennia-old dogma was the Only Right Way, led to their downfall. With the best of intentions, and egged on by Palpatine at every turn, the Jedi’s real war was against the Force on behalf of the Self, and the Force lost. Chirrut Îmwe, on the other hand, has no such delusions. The confidence he feels in his final moments comes from the total abandonment of his mortal concerns, and like Anakin Skywalker four years later, it leads to his own death. In both moments, the characters are not wielding the Force; they are allowing the Force to wield them.

The beach scene is of course Peak Chirrut; it’s too neat to suggest that he lives this way all the time. Chirrut is said to practice the art of zama-shiwo, or “the inward eye of the outward hand”, which is a fancy Star Wars way to describe, basically, mindfulness. Rather than push and pull it to meet his own needs, Chirrut seeks to be in accordance with the Force at all times, above all else. This is not unlike real philosophies here on Earth—especially Taoism, which speaks of the unknowable way of things as a flowing river, that one can move more easily in concert with than against—but unlike in real life (pardon my heresy), in Star Wars we know the Force is a real thing and has real ends: those of the writers. 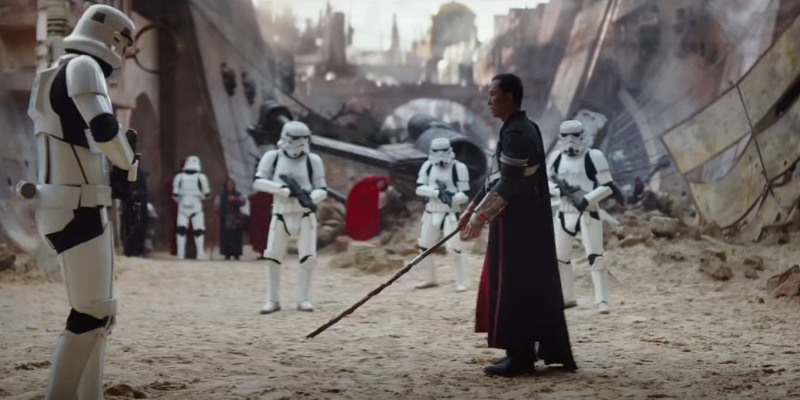 While many stories feature dei ex machina, improbable things that happen simply because they need to for the plot to work, Star Wars has a literal deus in the form of the Force, and its ends are eminently knowable—the Death Star is bad and should go away. Everything that happens across Rogue One and A New Hope (while serving the grander design of Anakin’s destiny) happens in order to bring about that end. We know that as consumers of the story, but from a certain point of view, Chirrut knows it too. Even when fighting on Jedha (in defense of Jyn and Cassian, I’d note) his martial training and mindfulness allow him to dance between blaster bolts and handily dispatch a group of stormtroopers, and later he destroys a passing TIE fighter on Eadu that he can’t even see, sending it crashing into a gun emplacement for good measure.

To all but the truest believers of one form or another, these appear to be feats beyond the ability of a real blind person. But because Chirrut exists in a universe with the Force, they are possible for him—not because he’s directing the Force, but because he’s truly listening to it. What he describes as the Force “moving darkly” around Cassian on Eadu may in truth be something as innocuous as goosebumps, or one of those “bad feelings” everyone is always having in these movies. What sets Chirrut apart from Baze or from Cassian himself is not what his senses are telling him, but his capacity to listen and to understand.

Which brings me to Han Solo. No one in their right mind would suggest Han is Jedi material (though you probably wouldn’t have to look too hard to find someone not in their right mind), but in my opinion, no one better demonstrates the degree to which the Force will express itself through anyone, sensitive or not.

Han’s exemplary piloting abilities aren’t just learned, they stem at least in part from a generalized “Solo Luck” that keeps him alive everywhere from asteroid fields to swoop races to crooked sabacc tables. When Obi-Wan says “in my experience, there’s no such thing as luck”, he’s suggesting that these things don’t just happen, they happen because the Force wills it. Things that are meant to be, will be, and things that are not, will not.

Even in spite of his professed disbelief in “mystical energy fields”, it’s Han Solo’s moral core, however deeply he tries to bury it, through which the Force is acting to ensure the destruction of the Death Star. That’s what allows him to shoot Darth Vader off Luke’s tail and live to tell the tale. Like Chirrut crossing the beach, he didn’t do it because he got lucky, he got lucky because he chose to do it.

That’s how the Force works, Han—it acts through you as it will, and only by making peace with that can one be their optimal self. For Chirrut, that meant total surrender; for Han, it meant leaving his criminal past behind him, and supporting his wife, and in the end, unconditionally loving his son.