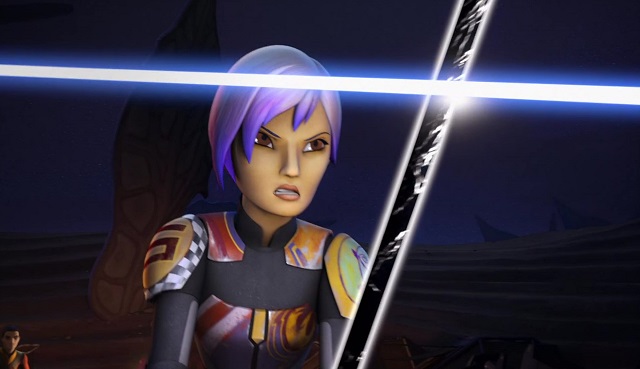 Jay: THIS WAS THE EPISODE I WANTED SINCE SEASON ONE.

Let me explain. I always wanted a Sabine-centric episode like this. We got a few, but I wanted to learn about Sabine the same way we learned about Ezra. We got her story teased instead: Imperial Academy references early on, and we knew she was a Mandalorian, and something happened with her family. But that’s it. The episodes were as tight-lipped about Sabine’s background as Sabine herself was. And despite our impatience, it makes perfect sense: Sabine doesn’t just volunteer this information. It’s a slow burn, once she gets to trust you.

But here there was a payoff and boy was it a payoff. This episode was elegantly simple: the training was the entire plot, so it could focus on character work. It meant there was room for it to be an ensemble episode: Ezra, Kanan, and Hera all got great character moments in addition to Sabine. And we learned a ton about Sabine, featuring some of the finest character work yet seen in this show. For my money, this was the best episode in the series to date.

We saw the characters engaging with their histories and biases, engaging with each other — having flare ups and drama. And goodness, if there was any episode to get on the day of the Women’s March, this was it. In addition to Sabine’s history, I love that Hera both called Kanan on his crap and also helped Sabine out as well.

Goodness, what an episode.

Ben: I have to agree with Jay. This is exactly what I’ve wanted from this show, not just for Sabine, but for everyone. Up until now, Sabine was the character who we had seen develop the least, next to possibly Zeb. But even Zeb had at least two episodes solely about him and coming to terms with the destruction of his home. Sabine’s story had been packed down, waiting to explode much like one of her beloved detonators when the show was good and ready for us to know.

It’s so fascinating how it all played out. Obviously, it took days of intense training, of frustrations and fighting and shouting at the man that she sees as her father for Sabine to finally tell him about what happened to her before she left Mandalore. The acting and animation in this episode was superb with how well it evoked pathos, showing us just how damaged Sabine really is, and how much pain she had kept away from everyone, only for it to all come bursting out at once. 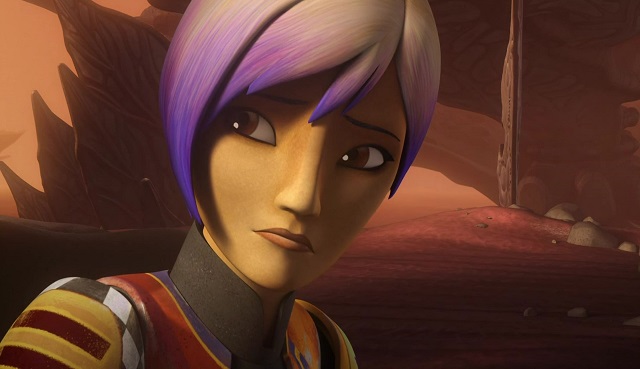 I’m fully upset with the idea of a young, twelve or thirteen year old Sabine being taken in by Hera and Kanan, them seeing a damaged and far-too-adult for her age young girl who doesn’t trust them enough to even follow their orders without fully understanding what they are trying to do. And when she’s at rest, she huddles alone in her cabin, refusing to tell them what happened or where she learned everything that she did except in the vaguest terms. She spends her time painting, because that’s the only way she can express herself, and vows to forget her family on Mandalore.

It’s just…so sad. She seems so broken to me now.

The groundwork for the revelations in this episode has been seeded throughout the entire series to this point. Every little tidbit of information we’ve gotten about Sabine came back into play, as far back as the first season, or even her very first appearance in the “Art Attack” short. To have them all pay off in such a terrific, moving way that makes the character of Sabine pop off of the screen into such life in one 23-minute episode, it’s a rare show that is ever able to pull that sort of stunt off.

I’ve loved Sabine since the earliest episodes of the series, and I’ve wanted this sort of development from her for a very long time. And I’m delighted in how it worked out.

David: I’m adding my voice to the ETE choir (I’m the baritone) and going ahead and saying that this is my favorite episode of the series so far. Even though it’s just the first half of a two-parter, “Legends of the Darksaber” has all the marks of a bottle episode: it’s confined to a couple of existing settings, it barely uses new assets, and it focuses on drama and characterization over plot. And I don’t mean this as a slight: bottle episodes have given us some of the best TV episodes: think of “Fly” from Breaking Bad, “Ice” from The X-Files, or “Out of Gas” from Firefly.

Dave Filoni said in the latest Rebels Recon that he wanted to have the whole episode be about the training session because he thought it would give Sabine the space she needed to develop, so maybe the budgetary concerns that usually drive bottle episodes were not the reason we got one, but it doesn’t really matter: even if they were self-imposed, the same limitations applied here. Robbed of spectacular space battles and sprawling galactic vistas, unable to use all the tools at the series’ disposal, “Legends of the Darksaber” simply had to have better dialogue and crisper characterization than the norm, or it would have sunk like a stone. Thankfully, Dave Filoni was up to the task: this episode may have the best dialogue of the whole series and it manages to have the urgent intensity of classic pieces of episodic television like the ones I mentioned above, especially during the final duel between Sabine and Kanan. This is simply great television, and the choice to have Sabine be the focus character was a most welcome one (although, honestly, she was supposed to step into the spotlight last season—you guys took your time.)

And hey, if this episode has also saved them some money for a spectacular season finale, I’m not going to be complaining. 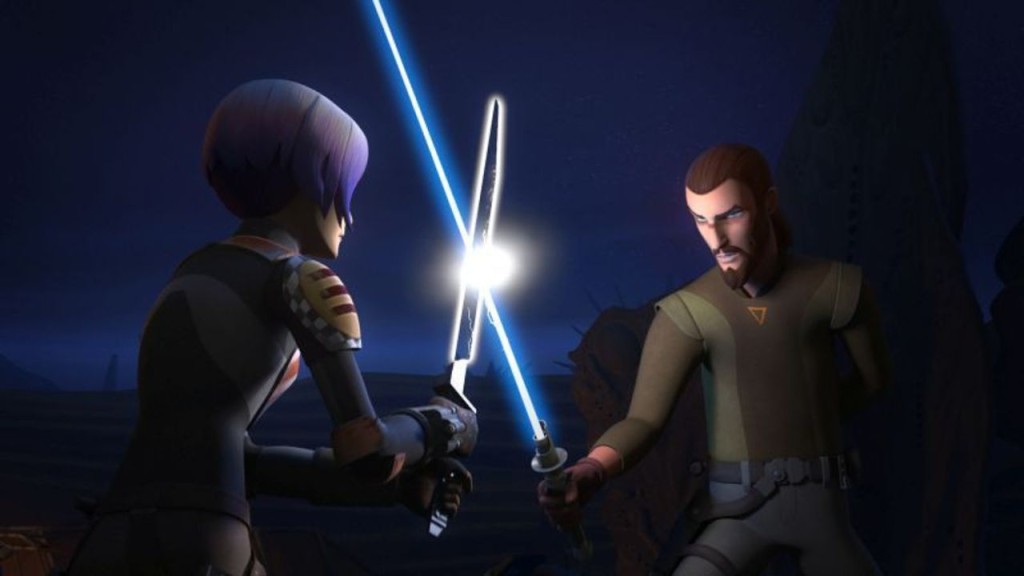 Sarah: Chiming in to agree that this is absolutely one of my favorite episodes of the series. I’ve always had a soft spot for Mandalorians and Sabine’s particular form of expressive rebellion against conformity instantly made her one of my favorites in the show. Firstly, I love the idea of the darksaber as a sort of Excalibur in Mandalore culture…and I am totally on board with Sabine as the King Arthur figure. But more than that, this episode had some absolutely fantastic character development and emotion, and it’s one of the few episodes that I immediately wanted to rewatch in order to appreciate its character work.

“Trials of the Darksaber” was masterful in its execution. Focusing the entirety of the plot on something as simple as training allowed for a great exploration of Sabine’s character and the dynamics of the Ghost crew, and culminated in possibly one of the most intense moments of the show. Sabine’s monologue at the end, when she’s finally pushed out of the emotional barriers she’s built around herself, is heart-wrenching (and contains some truly excellent acting from Tiya Sircar). More importantly it feels like a natural development in her characterization; the show has been tight-lipped about her history with the Empire because Sabine herself hasn’t wanted to talk about or dwell on it. Feeling abandoned by your family because you stand up for what you believe in (and the subsequent reluctance to trust anyone else in order to avoid feeling that pain again) especially hit home for me.

I additionally loved the interactions between Kanan and Hera and Kanan and Sabine in this episode. Trust was a major theme, from Sabine learning to trust in herself and found family to Kanan trusting in his skills as a teacher and in Sabine’s ability to handle confronting her bottled up emotions. Family has always been a major theme throughout the Star Wars saga, and found families especially so. This episode was a perfect example: Sabine, a Mandalorian who grew up in a culture that heavily emphasizes the importance of family and clan, was rejected from her birth family. But she found her way to the Ghost, showing that family is more than blood ties but about those who love and support you while giving you room to grow. And now that Sabine has really truly learned that lesson, perhaps she is better equipped to confront her birth family and reconcile with them. I still feel there’s more to Sabine’s story and I can’t wait to see it unfold.