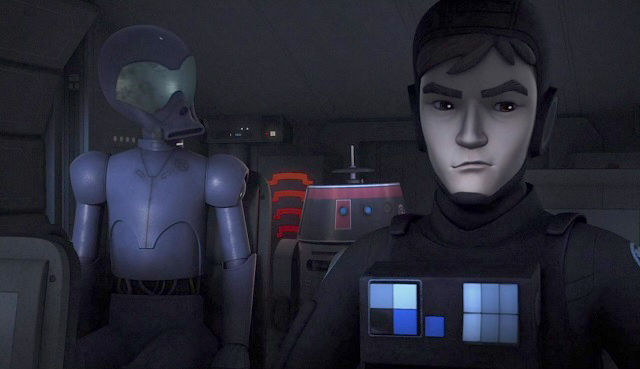 Mike: So I thought this episode was fun enough, but here’s a question that’s been in the back of my mind lately: is Star Wars Rebels serving its supporting characters adequately? I love the basic premise of AP-5 as a counterpart to Chopper, but we’re barely seen him this season—have they developed him enough in his two or three appearances to earn a POV story like this? Agent Kallus is the most prominent character without a Spectre designation, and even he never got to shoulder an entire episode himself until just a couple weeks ago, despite his having one of the most dramatic and consequential recent character arcs. Are they doing justice to these secondary players (hey, remember Ketsu?) or are we only seeing the Cliff’s Notes of their stories?

Ben: Short answer, no. Not nearly. The Rebels writers are still falling into much the same trap that they did during The Clone Wars, where they introduce side characters and then do nothing with them until it’s convenient to bring them back up later on. TCW could get away with it to some degree due to its less-serialized style, where people like Cad Bane and Barriss Offee could pop in and out of the overall narrative without too much of a disconnect. This approach had its own pros and cons, as any fan of Barriss will tell you. In Rebels, though…

Rebels’ storytelling is a much tighter, more straightforward narrative that’s driven by the actions of its central characters. The pacing is usually quick, almost too quick, driving events forward, where major plots are brought up and then resolved very quickly thereafter (for the most part; usually the villains work much more slowly than our heroes). This irreversible drive forward gets to the point where a lot of the side plots and characters don’t get the development that they really need.

A lot of the characters are introduced for the purpose of being in the writers’ toolbox so they can be brought up and used from time to time whenever the plot needs something within their expertise. Rex is along for the few times they need him to impersonate a stormtrooper. AP-5 is around for his dour humor and repartee with Chopper. Ketsu has shown up all of twice to save Sabine’s hide and then disappeared back into the larger galaxy. None of them have arcs, none of them have a true purpose to their presence in the larger plot aside from their respective Dirty Dozen-esque roles.

The characters that this really hurts, though, are the ones who do have arcs and then don’t get the development onscreen to make that arc make sense. Exhibit A is Kallus. We don’t even know the man’s first name at this point, he’s received almost no development aside from one episode, “The Honorable Ones”. All of his development from a loyal, even fanatical officer of the Empire to a willing ally and informant for the Rebellion has taken place offscreen or (even worse) during the time-skip between seasons two and three. 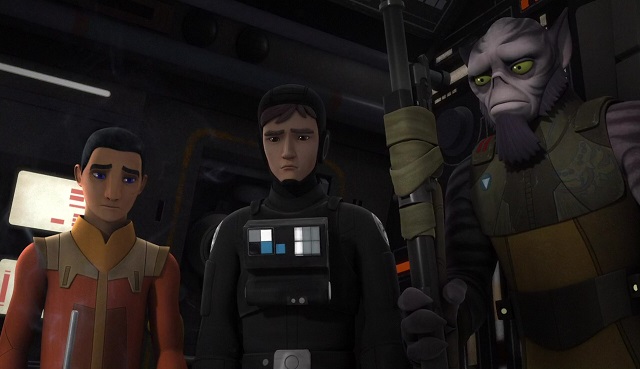 This even extends to members of the main crew. Poor Zeb has had even less development than Kallus; Zeb is largely the same exact person now, almost at the end of season three, that he was in the very beginning of the show. He’s a bit friendlier to Ezra and that’s about the only difference. His one development episode, “Legends of the Lasat”, has basically been ignored since it aired. The other example is Hera, who has not developed so much as she’s just adapted to the new role she’s been put into as the leader of an ever-growing rebel group. The few things we’ve seen of her past are the few revelations we’ve gotten about her character, and they’re in relation to development that happened before the show even started.

Let’s remove the illusion now: Rebels is not an ensemble show like TCW was. Rebels, at least in its run thus far, has been about Ezra, Kanan and to a (much) lesser extent Sabine. Maybe it will switch tracks at some point down the line, maybe not. But since the beginning, the show has been about Ezra, and everyone else has been satellites to his development as a character. Kanan and Sabine were both lucky enough to have compelling stories that developed in parallel to his, so they were shown at the same time. Most of the other characters have not been that fortunate, and are relegated to little side episodes like this week’s in lieu of that.

David: Rebels fails at being an ensemble series, but I’m not sure it even tries. As Ben said, it’s Ezra’s story and everyone else is lucky if they manage to get any screen time. I suspect it’s a creative choice, a deliberate one, and it’s now dawned on everyone that Rebels is not The Uncanny X-Men but The Amazing Spider-Man, and that Zeb is not Colossus but Flash Thompson. And if the secondary characters fade into the background, the tertiary characters practically disappear.

As I mentioned in our piece about “Iron Squadron”, this wouldn’t be such a problem if at least the “wallpaper” characters were on screen, even if just in the background (speaking of “Iron Squadron”, remember those kids?). If we knew that Ketsu or Rex were living their own lives, I think that their lack of protagonism wouldn’t be this painfully obvious. AP-5 can consider himself lucky: he’s had more to do this season that poor Garazeb Orrelios, who is probably looking at Rex with envy every time the old clone gets to play the heavy.

One thought to “Rebels Revisited: Rounding Out the Cast”