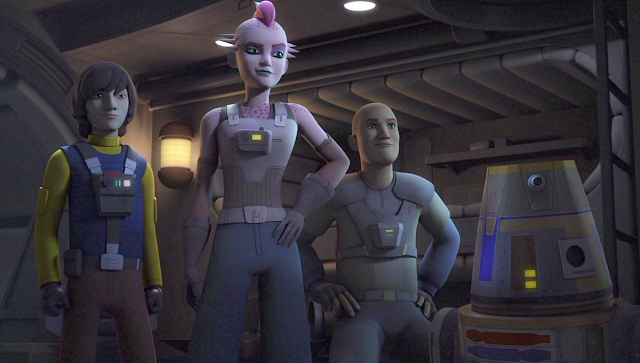 Ben: Writing teenagers is hard. It’s very easy for teens to come off as annoying, since the most common stereotypes for them are them being self-confident, rebellious or angst-ridden, and sometimes all three at once. Of course, most adult viewers won’t remember what being a teenager is like, loaded with the beginnings of emotions and understanding that will eventually give way to adulthood, typically through circumstances and time.

Rebels stepped into this minefield right away by giving us Ezra, the precocious youth with the laser slingshot and enough attitude to thumb his nose at the stormtroopers stomping around his hometown. Ezra has developed a lot over the show’s course, though, so the writers knew better than to just give us a teenager and leave him as it was for the long term. It probably helps that they had experience with Ahsoka’s character arc in The Clone Wars.

In “Iron Squadron”, we meet a crew of three teens much like Ezra when we first saw him: young, scrappy and willing to stick it to the Empire however they can. Unlike Ezra, who was on his own before being found by Kanan, the trio who make up Iron Squadron only have each other. Their leader, Mart, lost his father in the resistance, and it was likely his idea for them to take a ship and use it to fight back however they could. Unlike Ezra, who was embittered about fighting after his own parents’ death, Mart sought to follow his father’s example.

It’s an interesting comparison between Mart and Ezra, two teens who lost their families to the Empire. Where Ezra was on his own, no friends or family left, and had to be found by people who were willing to give him the sort of help and support he needed, Mart still has his friends, and his uncle is willing to drop everything to come and rescue him once he knows that the boy is still alive. Where we’ve already seen Ezra develop into a good soldier, someone who’s willing to follow orders and even leaves Mart behind in order to complete the mission he was given. But he still relates to Mart, he knows what it feels like to be alone and angry, ready to lash out at any and everything.

The episode makes it obvious that Mart and his friends will be back; in what capacity remains to be seen. It’s possible that the boy may be relegated to being used by Thrawn as a tool to move against his uncle. Hopefully, though, he gets the sort of character development that Ezra did, and becomes a valuable member of the team long-term. After he learns to curb the attitude a bit, of course. And gets a haircut. No one likes that haircut. 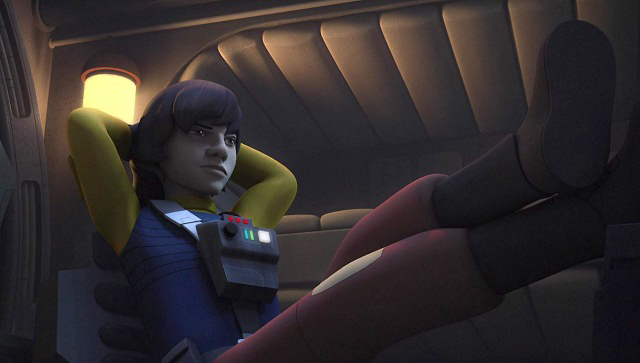 David: This episode sadly returns to what has become the Rebels formula, that goes like this: our heroes meet a new character or group of characters, there’s initial mistrust if not open conflict, and eventually they all end up forgetting their differences and joining up against the Empire, with the new guys joining the Rebellion. We saw this with Rex, with Ketsu Onyo, with AP-5, with Cham Syndulla, with Fenn Rau, with Kalani. While seeing new people join the Rebellion is always nice and makes us excited because we see the future Alliance take shape, the excitement gets diminished when we realize we’ve seen this exact plot before.

Perhaps if the new recruits hung around—if we saw Ketsu sparring with Fenn at Atollon Station, or Chopper and AP-5 working on a communication console, or Wedge passing by our heroes and saluting, we wouldn’t feel like we are seeing the same sequence over and over like some maddening time loop. We’d feel like the Rebellion is growing, and like our heroes’ extended family is becoming larger and their universe more complex. As it is, it inevitably feels a bit stale. A pity, because the recruitment of three new characters of Ezra’s age and all the interesting interactions that could have brought to the mix deserved more than this.

Mike: While I can’t say I minded it much during my viewing of the episode, David, you make a good point about the recruitment loop, so to speak. In the Ryloth episode a few weeks back, one thing I enjoyed was seeing Gobi already with the Ghost crew at the opening of the story; similarly there was an episode late last season where Ketsu is just sort of around and no explanation is given; little things like that help to sell the larger story that we’ve come to understand is happening around the edges and the increasingly crowded lives of our main characters, but I wonder if they can only stretch that conceit so far. Iron Squadron was no less interesting to me than, say, Fenn Rau was after his first episode (okay, maybe a little less), but in the big picture, maybe the show would have done better to give us an additional Ketsu episode rather than lump another three tertiary characters onto the pile.

But maybe we’re looking at this wrong—the episode may have revolved around the Iron kids, but were we really meant to understand and sympathize with them all that much, or are they just a vehicle for better understanding a much more prominent character—Commander Sato? Certainly that’s what Thrawn took from this little adventure, and I have to say what little we learned about him here was a long time coming.

One thought to “Rebels Revisited: “Sounds like a Shipful of Ezras””