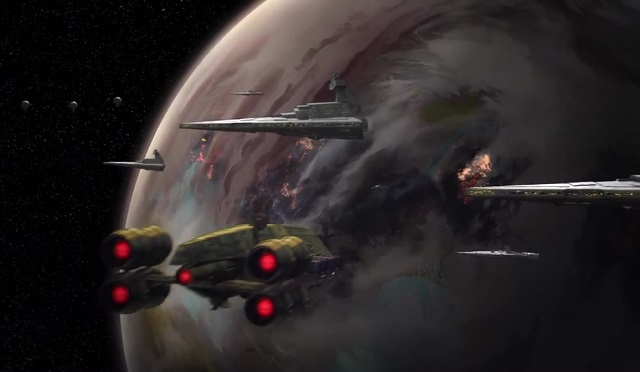 Now, though, after the time-skip between the second and third seasons of the show, we’ve finally returned to Lothal proper in “The Occupation”. We go back to familiar locales first glimpsed all the way back in the show’s pilot shorts, now seeing the wind-swept McQuarrie-inspired grassland covered in heavy industrial smoke and dust. We hear that the friendly Ithorian bartender Old Jho, an early ally featured across multiple episodes of the show and even some of the books, was evicted from his establishment and summarily executed by the Empire for treason. The once-friendly locals don’t even dare brave the streets after dark anymore, with all motorized transports impounded and Imperial patrols everywhere. Lothal may have been under Imperial rule before, but now it is under true Imperial occupation, with all efforts being taken to stamp out any further potential rebellion.