One of my earliest memories of Star Wars fandom is the day Attack of the Clones was announced.

Not the film itself, which was obviously a given, but the title. It was August 7, 2001—I had been posting on the Literature section of TheForce.net’s Jedi Council Forums for a couple years at that point, in addition to running my own low-rent fansite dedicated to the New Jedi Order novel series, but before that day I had never ventured into the more, let’s say, mainstream waters of the movies-only section. I knew enough to know that most people, even many of those you might call superfans, were at best only dimly aware of the novels and comics of the Expanded Universe, and many were downright hostile to them.

At best, they saw the EU as silly, or crass; at worst, they saw it as illicit, as glorified fan fiction. Even those who were reasonable enough to believe that the Empire wouldn’t simply have given up after the Battle of Endor felt that the real story ended at Return of the Jedi—anything else was beside the point. And besides which, Star Wars was George Lucas’ story. Even if he grudgingly accepted the existence of tie-in material continuing his story, it still wasn’t his story, so it didn’t really count, when you thought about it.

Anyway, back on that day in the summer of 2001, I tiptoed into the movie forums to see what people were saying about Attack of the Clones. Some of you are probably too young to remember a time when Episode II was just “Episode II”. Suffice it to say, Attack of the Clones was not what people were expecting. Ewan McGregor was caught reacting to the title on camera, while doing press for Moulin Rouge, and he and Nicole Kidman were visibly flabbergasted. The reaction at the Jedi Council Forums, meanwhile, was somewhat less good-humored. I happened to have the day off from school, and I pretty much spent the entire day staving off a riot from bitter, betrayed fans—and these were people who’d already weathered The Phantom Menace.

It’s not that I thought it was an awesome title or anything; I just didn’t think we should’ve expected anything else from the man behind The Empire Strikes Back and Indiana Jones and the Temple of Doom, and if there’s one thing that pushes my buttons, it’s unreasonable complaints. Love it or hate it, Lucas has a shtick and he sticks to it—and I’ll never understand why anyone who isn’t at peace with that would want to waste their time with him.

Much hay has been made (at least if you’re reading the sites I’m reading) of the Disney sale presaging the obliteration of the Expanded Universe. And certainly, no one in their right mind could ever have believed Disney would voluntarily shackle themselves to adaptations of 20-year-old tie-in material—though some were happy to insinuate that we did. The best we could, and still can, hope for in terms of preserving the existing canon is that the 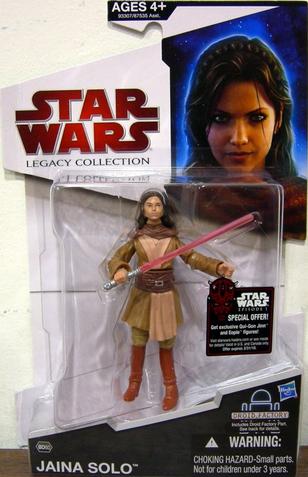 sequel trilogy jumps clear past the bulk of the EU into 50 ABY or so, and maybe—maybe—sticks Jaina Solo or Ben Skywalker into the slot of “next generation character” that we all know very well is coming.

Of course, Ben would be hard (though not impossible) to use without explaining his mother Mara Jade, which means explaining Emperor’s Hands, and possibly Thrawn, and well…you can see why that probably isn’t going to happen.

But I don’t see that as the death of the Expanded Universe—I see it as a new beginning. Remember those movie fans I mentioned? The ones who thought Lucas’ story was the only story, and that it ended at Jedi? Well, Episode VII breaks both of those rules. Jaina or no Jaina, from here on out, it’s all the Expanded Universe.

That’s what I’ve come to learn in the twelve years (Christ, I’m old) since I logged into TFN to stand between AotC and a bloodthirsty mob—deep down, we’re all here for the same reasons. The Unofficial New Jedi Order Homepage begat TFN Books begat a blog at Starwars.com back when Starwars.com had blogs, and what I know now is that Star Wars fans are like the three blind men who place their hands on an elephant and describe three different creatures depending on what they’re touching, when the reality is all those things and more. Star Wars wouldn’t be the phenomenon it is if that weren’t the case.

Over the nine months or so since D-Day, what I’ve witnessed to a large extent is that the most vocal fans have divided into two main groups—those who worship the ground Lucasfilm walks on (or would, if it had feet), and those who believe the whole thing is going to hell (or worse, being maliciously driven in that direction).

With the help of some of the smartest internet beings I know, my goal is for Eleven-ThirtyEight to be the bridge between those two camps. Passionate, but not sycophantic. Pragmatic, but not cynical. Intelligent, but not haughty. Well, maybe a smidge haughty.

And above all, genuinely excited to see what comes next.

3 thoughts to “D-Day, an’ Everything After – The Story of Eleven-ThirtyEight”