Star Wars fandom, and this site in particular, have spoken at great length over the last year about the course charted by the New Republic from Endor through to the destruction of Hosnian Prime. Is the New Republic actually better than the old one? Is it different enough? Should it be different? We have an unusual frame of reference for these questions, because aside from a few hints in Aftermath, pretty much the first thing we saw the New Republic do was get blown up in The Force Awakens. Since then, both stories have gotten a lot of new elaboration and context, but we’re still debating the big question—could the destruction caused by Starkiller Base have been prevented somehow?

Way back in March, before we had either Bloodline or Life Debt to consider, Ben Crofts tackled this question head-on in his piece Fantasy Foresight—basically arguing that it would have been impossible for the New Republic to eliminate the vein of Imperialism that became the First Order without becoming just as bad as the Empire itself.

Surely they could have acted differently than they did, though, right? In last week’s guest piece What the New Republic Should Have Learned From the Old Republic, Chris Wermeskerch looked specifically at the example of Kashyyyk, whose liberation Mon Mothma argues against in Life Debt, and cites several examples where even the Old Republic, corrupt and bureaucratic as it was, managed to act in the interests of small, oppressed populations. Isn’t there a big grey area, Chris wonders, between absolute pacifism and rampant militarism?

While I can certainly agree with that, I don’t think there’s enough evidence regarding Kashyyyk’s circumstances (especially in light of Mothma’s claim that it’s but “one world among the thousands we are trying to reach”) to really characterize that particular call one way or another. What I want to look at instead here is Mothma’s judgment in general—we’ve known since Aftermath that she’s advocating, at the least, for an enormous disbanding of the New Republic military as soon as a few months after Endor. Per Life Debt, we know that a couple months later she appears not to have suffered any major changes of heart, and that meanwhile the Imperial starfleet is down to roughly a quarter of its earlier magnificence.

While Mothma calls for a reduction of the NR’s forces by ninety percent “once we are able to officially confirm an end to this war”, the end that actually arrives—the Galactic Concordance—remains only vaguely sketched out until, presumably, next year’s Empire’s End. We don’t know that the Military Disarmament Act actually hit her ninety percent target in the years that followed, only that by the time of TFA the NR fleet was a fraction of the OR’s—yet still easily the largest in the galaxy.

Or was it? We actually don’t know the true extent of the First Order’s starfleet by that time. The official information we have there is that the Concordance left the rump Empire severely hampered and cash-strapped, and only upon spreading into the Unknown Regions and building secret shipyards in violation of the treaty did their vestigial navy begin to grow at all. With Starkiller and its materiel off the table, how big is the remaining First Order, really? I guess we’ll find out in Episode VIII.

So with all that said, we know only that Mothma called for a ninety percent reduction in the starfleet, not that that’s exactly what happened (and it’s typical in politics, I should add, to ask for more than what you really want to allow room for negotiations). We also know the Empire signed a treaty agreeing to both harsh financial penalties and a disarmament of its own, which we know for sure is not what ended up happening. So, was she wrong? Absolutely not.

Nor do I think Mothma was simply being pragmatic and bowing to political pressures, as Life Debt tends to present her. The ideal leader knows when to compromise, but also holds true to just that: her ideals, and every word out of this woman’s mouth in the canon points toward the simple truth that she detests warfare. In fact, I would say she’s more of an idealist than Leia is—while Leia’s ideals are immediate, Mothma’s acting out her ideals at the macro level. If someone needs to be fought, she will expend the precise amount of energy needed to fight them and not an iota more; this is not a person who believes in overwhelming force. Here I’ll borrow a term used by John Maurer in his excellent comment on Chris’s piece—she’s right-sizing the war, because less violence is more important in the big picture than pummeling your enemy into submission. This might be as close, I think, as wartime governance can get to Jedi philosophy: stop your opponent, protect the weak, and maintain dispassion throughout. To assert your advantage beyond what’s strictly necessary is to become the aggressor you wish to defeat, and your enemies will remember it. It’s telling, actually, that the First Order leadership seems to be full of zealots: having been treated with a measure of decency, all the moderate Imperials had most likely come around by then.

To dip my toes ever so carefully into a real-world example: flush from the Allies’ defeat of the Axis powers in World War II, the United States set out to amass such a powerful military that no one could ever pose such a threat ever again. Seventy years later, our military budget is not just the biggest in the world, it’s bigger than the next eight budgets combined. And sure enough, it’s doubtful anyone could dream to fight us on the terms that WWII was fought—but that doesn’t win us any friends, either, and eventually those who sought to defeat us found new terms on which to fight. Even with a huge reduction of its starfleet, the NR’s first major loss was not a naval battle, but an unprecedented attack on civilians from the middle of nowhere; don’t tell me that not reducing their military would’ve prevented that when the US couldn’t manage to prevent 9/11. As has been said in the real world many times since, one side has to succeed one hundred percent of the time, the other side only has to succeed once. 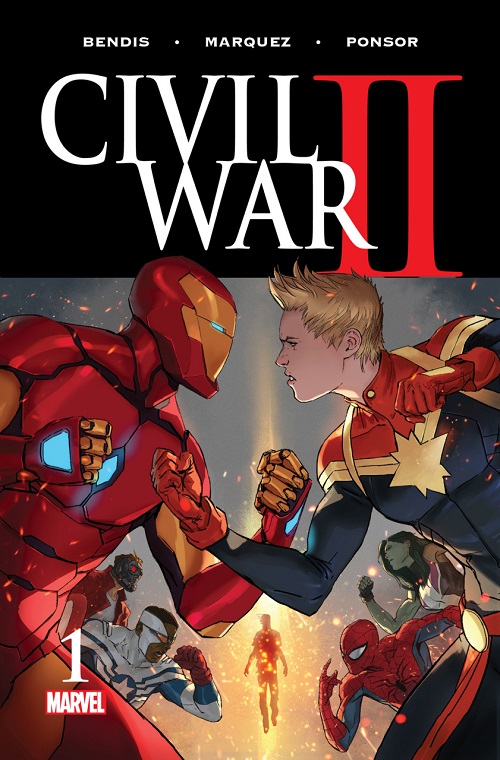 But to be honest, whether or not Hosnian’s destruction could have been prevented is beside the point. The underlying issue is, do we govern according to principles, or work backwards from worst-case scenarios? To use a less weighty example, Marvel Comics is currently in the midst of Civil War II, a conflict between A-list superheroes Iron Man and Captain Marvel over what boils down to a fantasy version of risk assessment. The Inhuman Ulysses takes in all the ambient math around him and experiences visions of what is likely—extremely likely, most of the time—to happen in the near future, and when that involves crime or violence, you’re snatched up by Captain Marvel and dealt with accordingly. Algorithms determining a person’s future criminal potential are a real thing that factor into sentencing for many people arrested in the United States today, and while I happen to think risk assessments are worth considering compared with the innate and unpredictable biases of any given judge, I also recognize that making decisions about justice (and thus, governance) based on what could happen is a very slippery slope to martial law.

Mon Mothma had no way of knowing what the First Order would end up becoming, the atrocities it would commit. At every step that we have thus far witnessed, she acted in accordance with her personal ideals and the values espoused by the Rebel Alliance (in a way that I was frankly relieved to see when I read Aftermath, as the Expanded Universe had been sorely lacking in this area), and they were lucky to have her in charge for however long she stuck around—tellingly, both Centrists and Populists pretty much admit to this in Bloodline. The beings who became the First Order were simply bad actors, and were only too happy to capitalize on the New Republic’s good intentions as soon as they were able. But that doesn’t make good intentions the same thing as naïveté, and it certainly doesn’t make them a mistake. Was Luke naïve when he threw away his lightsaber on the Death Star? Was he being pragmatic? Or was he doing what he knew was right regardless of how stupid it seemed? I don’t know if Mon was ever told that whole story, but sometimes it seems like she’s the only one who really gets it.