These results are extremely clear: the Star Wars universe is unequivocally male-dominated, with a male-to-female ratio of roughly 3.5:1 rather than the 1:1 we would expect in nature. The number of hermaphroditic individuals is extremely small compared to the whole and composed almost entirely of Hutts. The number of individuals of unidentified gender is actually rather small. It is considerably less than the proportion of individuals of unidentified species. I hypothesize that the revelatory power of gendered pronouns in non-visual media is likely responsible for that discrepancy.

Some small caveats. First, because this is raw Wookieepedia category data there is potentially a rather high level of inaccuracy, as individual Wookieepedians differ in how classifications are applied. Thus an error rate of several percentage points should be inferred even for data this simple in organization. Second, there are a number of known biases that serve to explain part of the inflated male numbers. One is clones. As the overwhelming majority of clone characters in Star Wars are those of a single male human, and there are at least 500 such characters, they have a significant impact of the summary numbers. Likewise the established in-universe misogyny of the Galactic Empire’s military branches would account for a tilting of the ratio among whatever proportion of the total is composed of Imperial military personnel (Imperials are divided into a seemingly endless suite of sub-categories and therefore not easily totaled, but the number is certainly in the 4-figure range).

Regardless, even accounting for these caveats, it is quite clear that the setting as a whole has substantially more male characters than any form of random distribution would allow to occur.

One Step of Greater Precision: Gender by Species

The next question, seeing the skewed gender balance of the whole setting, is to try and determine where it falls. One avenue of inquiry is distribution across species lines, and this is one I pursue. The most interesting species to examine would be Humans, of course, but with a data set close to 10,000 entries in size, I simply don’t have the resources to do it. Instead, I have chosen to examine three of the most common alien species in the universe: Rodians, Twi’leks, and Zabraks. These species were chosen both for their abundance and their similarity to humans allowing for obvious visual gender cues, as opposed to what might be observed in Trandoshans or Wookiees.

In order to get a grasp of the gender balance it was necessary to examine every entry in the species categories individually. In the case of Twi’leks this also meant examining the ‘Lethan’ and ‘Rutian’ subcategories. Each entry was opened and checked for gender classification, whether male, female, or unidentified (these species do not feature hermaphrodites). Error-checking was performed to ensure no individual was double-counted. The following entry types were excluded from this analysis: articles labeled non-canon, articles describing a group rather than an individual (ex. The ‘Twin Suns’ assassin pair), articles describing hybrids (including the Lawquane children and all Nightbrothers), and articles that were duplicates via spelling or other errors.

The gender breakdowns are summarized in Table 2.

The above results are presented graphically in Figure 1: 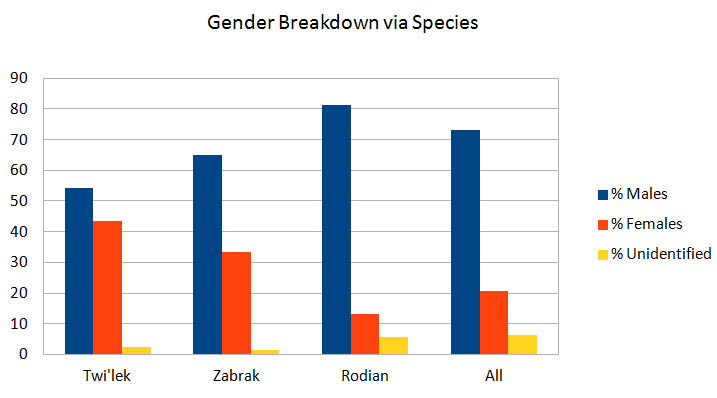 As can be seen, all three species retain male-dominance in the breakdown. However, they do so by wildly varying degrees. The ratio for Twi’leks is a mere 1.25:1, Zabraks are roughly 2:1, and Rodians a massive 6:1. Equally noticeable is that while Twi’leks and Zabraks are substantially closer to a natural gender balance than the Star Wars setting as a whole, Rodians are substantially further from that value.

Of course, the next question is why this should be so. The numbers can’t reveal that, but the differences between these three species do present certain suggestions. The most obvious hypothesis is that the greater prevalence of female individuals has something to do with the differences in erotic value across the species. Of all Star Wars species Twi’leks almost certainly present the greatest quantity of sexual imagery. Whether it’s Aayla Secura nude in Star Wars Visions, pin-up style images of Darth Talon in Legacy, or Twi’lek holodancers in The Old Republic, this association is obvious and abundant. Zabraks are less afflicted with this than Twi’leks, but there are certainly Zabrak characters who would fit that profile, most notably Maris Brood. Rodians, by contrast, have green skin, multifaceted eyes, snouts, and antennae. Their visual appeal for the purposes of human voyeurism is low at best.

While this is merely a hypothesis, and one that would take significantly greater research to document, the possibility that female representation increases across species lines in proportion to the utility of said females to serve as eye candy is rather discomforting.

Regardless of the reason or lack thereof behind these distributions, these three examples clearly show that species do not break down evenly along gender lines. The 70:20 ratio that characterizes the setting as a whole does not remain constant for the various species within that setting. As a result issues of gender in Star Wars are also issues of species, and vice-versa.