I find myself surprised to be writing this article. Surely if I wanted one thing from the Expanded Universe to survive the anticipated Disney purge and make its way into the Sequel Trilogy that it would be my favorite character, Corran Horn, right? The more I thought about what to write as I sat down to write that article though, the more my appreciation for the character of Mara Jade kept pushing itself into my thoughts. So I’m writing to save Mara Jade instead.

This appreciation was completely unexpected, not only because I thought I was going to write about a different character but because I have never been a big Mara fan. Looking back I realize now that I should have been and I can’t even explain why I wasn’t a fan. She really embodied what I look for in strong female characters in the Star Wars books. I didn’t quite know what I had until she was no longer included in the stories. 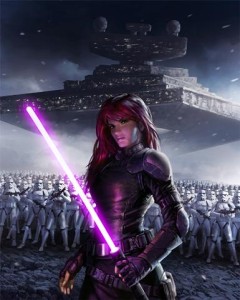 This Jade is perhaps the one I least like which is weird since he invented the character. Don’t get me wrong, I find the concept of her character to be enticing and I like how despite being the Emperor’s Hand she constantly makes decisions for herself and doesn’t feel like killing is always the answer to a problem. I think as a youngster reading the books I didn’t want to like her because she wanted to kill Luke and no one was taking my hero away from me! However, as an adult reading Zahn’s books now I find myself not liking the situations she’s written into. Zahn created this amazingly strong character and for the most part she is written into books where she can’t really win because Luke, Leia and Han are always in the way. By the time Choices of One came out I was really expecting or hoping to have a book with Mara Jade and without Luke, Han and Leia in it. I actually can’t figure out why all of her stories have to revolve around them. I believe she is a strong enough central character to the EU that she could hold a book by herself. I feel like we’ve never gotten to see her be the ultimate assassin/dark agent because the Big Three are always there to spoil things.

Now you might be thinking that during the timeframe that Zahn writes in Mara is the bad guy. Should the bad guy get to win? Answered simply, yes, if you consider her a true bad guy. I don’t. Time and again we’ve seen her administering Imperial Justice on people who actually deserve it for one reason or another. She’s not ruthlessly killing anyone she encounters and she usually tries to find out the truth before passing judgement. That’s part of what makes her character unique and intriguing to the reader. Therefore I don’t understand why we’ve never had a novel where we solely followed Mara Jade around. She’s the total package of a female character and could definitely hold down a book of her own. She is intelligent, independent and powerful which are all qualities I would like to see in the female Jedi that are included in the Sequel Trilogy. Why invent a new character when the perfect one already exists?

Jade survives the death of the Emperor and becomes successful in Talon Karrde’s organization. This version is definitely my favorite of the Jade character. I like how she decides to train as a Jedi only after a lot of thought and living of life. She continually tries to avoid the attraction to Skywalker and busies herself with the Smuggler’s Alliance and Lando. Her travels keep bringing them together and in a touching scene we finally get Luke admitting his love for her. She challenged him at every meeting and the Mara they developed became the best match for Luke. 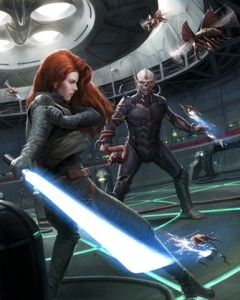 The only part I enjoyed of this version of Mara was her determination and strength shown on Dantooine during the NJO. Despite her sickness and hordes of Vong attacking them, she was able to stay alive long enough for backup to arrive. The ultimate motherly instinct and I applauded Del Rey for keeping her alive even after Ben was born because I seriously thought they were going to kill her off then. So often storytellers feel the hero needs to be motherless. When Anakin Solo died the readers shifted their focus to Ben and were hoping for great things from the offspring of Luke and Mara.

I am not going to get into the bad parts of the Del Rey Mara Jade and those are definitely something I don’t want to see saved from the purge. I’d also ask that any discussion doesn’t go into that either. I’m interested in having Disney preserve the character that is Mara Jade Skywalker and seeing her with Luke in the Sequel Trilogy (while also being a badass female Jedi too!). 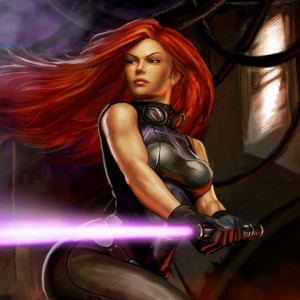 Mara Jade is the perfect match for Luke Skywalker. If they are going to have the story call for an offspring of Skywalker, and it seems logical that it would, I sincerely hope they include Mara as a female role model for the young Jedi in the series and as a wife and mother. Mara Jade has been a part of the Expanded Universe for a long time as a strong female character. I’m also slightly tired of heroes always having a missing or dead parent(s) in movies. So many of the recent sci-fi/fantasy stories seem to start with dead parents and I don’t think it is always necessary. I know some of this contradicts my thoughts on how Luke is going to die in Episode VII but I have been persuaded by some of the comments made on that article that the death of the mentor has been overdone. Star Wars also has a track record for having missing parents ie. Luke initially had no parents and Anakin’s father was unknown and then his mother was killed off in Episode II. If they can find a plausible way for Luke and Mara to remain together alive and on the sidelines I am all for them staying that way but I don’t want to see it at the expense of not fully developing the next generation of Jedi. Mara Jade is a great example of a female Jedi and I hope that they decide to include her in the Sequel Trilogy and other stories.