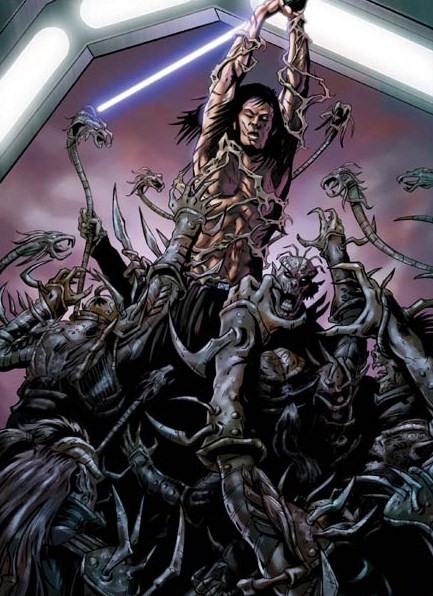 One interpretation of Daoism is that it is utterly passive, and that Daoists should make no effort to change the world. This interpretation is indeed a technically valid interpretation; the founder of Daoism, Lao-tzu, advocated severing oneself from society and becoming a hermit. However, when one considers the idea of Tian—namely, that heaven is on Earth and that it is inherently a process rather than a state—a completely opposing interpretation emerges. If heaven is a process, then it is a process that mankind must contribute to. In other words, man must take the understanding of the universe which it has gathered from the Dao and utilize this to make the world a better place—to create heaven on earth. Following one’s Li lines means applying the principle of Wei Wu Wei—active non-action—in a decidedly pro-active form. When Ganner sacrifices himself in Traitor, he is following his Li line to its fullest extent. His action—playing Horatio at the Gates in a manner that puts Gandalf the Gray to shame—allows Jacen to escape and follow his own Li lines, which culminate in his finding a peaceful resolution to the bloodiest war in galactic history.

Essentially, in Daoism we all have the choice of whether or not to follow our own personal Li lines, but the universe benefits far more from us choosing to follow the line instead of diverging from it. The point of attaining an understanding of the Dao is not to go and guard it in a cave like Gollum and the Ring; no, the entire point of this enlightenment is to take what one has learned of the universe and use that understanding to change the universe for the better. Luke Skywalker does not take his understanding of familial love and hide in a cave on Dagobah—he goes to Endor to redeem his father, even if it costs him his life. So the “non-action” part of Wei Wu-Wei can be reinterpreted as “not taking action against the stream of one’s life”. When combined with the “active” part of “active non-action”, the meaning is entirely altered. Rather than sitting on a mountaintop far away from society, Wei Wu-Wei becomes the process of actively following the stream of one’s life carefully and constantly.

Following the string of one’s Li lines can be complemented by understanding how Li lines interconnect, and how to manipulate those connections. Stover wrote another Star Wars novel, entitled Shatterpoint, in which the titular concept is used to describe the intersections of Li lines. By striking at the right place, and at the right moment, one can alter the course of history. Now, does acting upon the understanding of a shatterpoint follow the principle of Wei Wu-Wei or does it oppose it? I would argue that in many cases, the Li lines themselves lead one to this shatterpoint. If we are all interconnected, if the universe itself is entirely interconnected, then every action we take has an equal reaction—hence the Hindu law of karma. So to create our better world, to create and maintain Tian, then from a Daoist perspective we must learn to see how the Li lines of the universe interact, to see the shatterpoints of reality and manipulate them in order to create Tian. To use an example from Traitor, Jacen may have realized that his life or death was a shatterpoint for the war effort, and indeed the fate of the galaxy, causing him to go with Vergere and escape from Coruscant, rather than die with Ganner.

So I suppose that it might be more accurate to say that Jedi philosophy, or at least the radical school espoused by Vergere, is the practical application of Daoist principles in a concerted manner to bring about a happier, more peaceful world. The Jedi principles of non-attachment echo similar Daoist principles; even death itself is seen as simply being part of the cycle of life, a journey which we must all take in the end. Death is the natural termination of a Li line, and unnatural attempts to extend one’s life (such as feeding on souls or possession) are considered to be extremely reprehensible to the Jedi. One could even argue that death itself is the true finish line of a Daoist’s search for eternity. In the end, the Dao, the Force, or whatever term one applies… these terms are only shades of the truth. These terms mask the truths behind them.

Postscript: Dawn of the Jedi Issues 00-05, and Je’daii Concepts of Balance

In the past, I have contended that Vergere is a back-to-basics Jedi, suggesting that her philosophy is a throwback to both the real-world inspirations for the Jedi and the theoretical early Jedi philosophy. With that in mind, it’s interesting to look at how Dawn of the Jedi (bearing in mind that I’ve only read the first arc) interprets the beliefs and codes of the proto-Jedi. The Je’daii of Dawn of the Jedi (which takes place over 25,000 years ago, delving into the origins of the Jedi prior to the formation of the Galactic Republic) do seem to buy into a less biased version of ‘balance’ than the Jedi of the Prequel era—or indeed, the Jedi of KotOR. Their very code enshrines a commitment to truly balancing light and dark, rather than annihilating one in favor of the other as the later Jedi Order would prefer.

“There is no ignorance, there is knowledge.

There is no fear, there is power.

I am the heart of the Force.

I am the revealing fire of light.

I am the mystery of darkness

In balance with chaos and harmony

Immortal in the Force.”

The concept of dark and light being equivalent to evil and good is set aside in favor of a worldview where both are seen as essential elements of a balanced life—we see the Je’daii exiling individuals for falling too far into the dark, as well as succumbing too thoroughly to the light (well, the second one is alluded to, at least). It’s not as well-developed a set of ideas as that espoused by Vergere- but then again, Traitor can be interpreted as an extended Daoist parable on the Uncarved Block in a certain light—but the basic concepts of Je’daii philosophy to roughly line up in a broad-strokes manner with what Vergere was trying to teach Jacen. Vergere takes the ideas farther and with more nuance—dark and light fundamentally being internal concepts, rather than external god-substitutes—but the fundamental concept is still there, and acted upon in the comics. In short, there is some substance to the idea that Vergere is drawing on the earliest concepts of Jedi philosophy.

3 thoughts to “Vergere: An Ultra-Traditionalist Jedi, A Radical Daoist Part 2”