Show me a good Star Wars story, and I’ll show you a character who just plain does not want to be there.

As I sit here writing this, the fifteen-second teaser for Star Wars Rebels has just showed up online, and already people’s eyes are twitching over one particular phrase: “the Jedi will rise”. Let’s be realistic here: of course there will be Jedi in Rebels. As I mentioned in our chat on the show a while back, I’m personally hoping for more of a Yoda vibe than a Luke vibe—an old, retired Master the characters occasionally seek out for advice, and maybe a handy li’l slogan for the opening titles.

But really, I doubt Lucasfilm wants that—they want a Luke, someone learning the ways of the Force that young viewers can relate to; and in all likelihood, someone with a spunky twenty-something Togruta to show them the ropes.

But why? Does Force enhancement enhance a character’s gateway potential as well?

I don’t think so. Enter Exhibit A: Ania Solo. If you haven’t been reading the new Legacy comic series, Ania is the great, great (great?) granddaughter of Han and Leia, and while she shares that common ancestry with her contemporary Cade Skywalker, the protagonist of the original Legacy, Ania is everything Cade is not.

Far from being an aloof, landed figure struggling to shoulder the weight of her family history, Legacy creators Corinna Bechko and Gabriel Hardman took Ania Solo from “elite”, cruised straight past “everyman”, and didn’t stop until they reached “works in a junkyard”. To what extent she knows or cares about her ancestry remains to be entirely illuminated, but what’s clear is that all Ania wants is to stay out of the way; the sad little queen of a sad little hill. The series’ drama begins when the old Solo luck comes knocking and deposits an errant lightsaber at her door—thrusting her into the center a series of events she could not give less of a crap about; at least, not at first.

In my earlier article What Star Wars Can Learn From The Avatar Franchise, I pointed out that while one of that series’ highlights was its tendency to empower “the Han Solo character type”, they were only, naturally, riffing on the role that Han Solo himself perfected. When I look back on the great tapestry of characters Star Wars has offered over the years, even I am surprised by how little people seem to have appreciated what Han brought to the Original Trilogy—ironic distance. The language of Star Wars—the first one, I mean—was one of broad, sweeping archetypes and mythological melodrama, but as much as it tapped into ideas that everyone can understand, I would argue that the secret ingredient in the Star Wars formula, the thing that keeps it from collapsing under the weight of its own artificial portent, was a simple eye-roll every once in a while.

To make a good Star Wars story, someone needs to be there to tell the protagonists how exasperating this all is. While overall, I think this was one of the biggest failings of the Prequel Trilogy, note that Ewan McGregor’s Obi-Wan came as close as it got to a Han figure. Who, after all, was the audience-identification figure in The Phantom Menace? Qui-Gon? Anakin? Or the one guy who wondered aloud why the hell Jar Jar was sticking around?

But this problem isn’t just with the Prequels—even the Expanded Universe, especially as the years after Return of the Jedi kept ticking along, became less and less about everymen and women and more about big kings of big hills, and lately has seemed to have, well—collapsed under the weight of its own artificial portent. 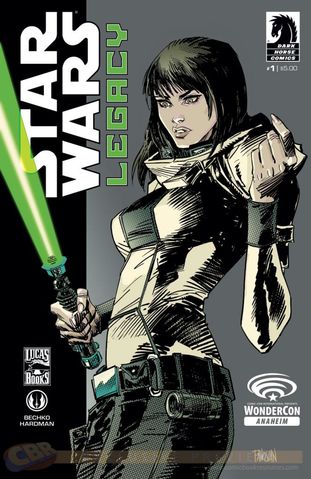 Of course, to shove Ania Solo into the Escape Pod is a smidge disingenuous, as there’s likely no way for the ST to really use her without reinterpreting her as a child or grandchild of Han and Leia. But if there’s one big mistake I’m willing to lose the New Republic Era in order to correct, it’s the lack of any non-Force-sensitive Skywalker or Solo offspring.

Ironically, if Han and Leia had had a child who couldn’t become a Jedi, that character would probably have been much safer—since Star Wars mostly seems interested in telling stories about Jedi, non-Jedi tend to run up against much less life-threatening peril. That bias worked out pretty well for Ania up until the still-ongoing events of her comic, but seeing a strong, young woman with so much of the smuggler and the princess in her, yet without all the baggage that comes with Jedi indoctrination—ah, excuse me, I mean training—makes me honestly excited at the prospect of someone like her in the Sequel Trilogy. Even three or four generations removed, she’s got all the tenacity and dignity of Leia, and all the honor and resourcefulness of Han; but all the courage and ideals in the world are no match for a good facepalm every now and then.