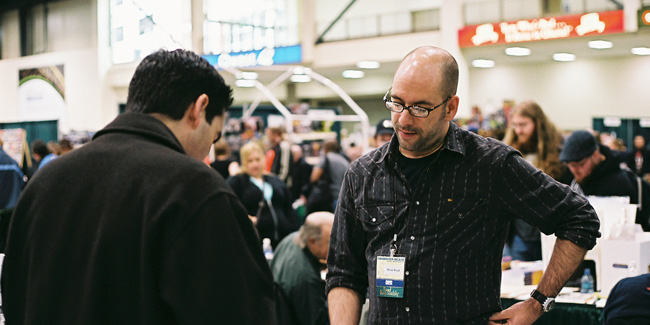 As pieces like this so often must, let me start with some caveats.

I watch a great deal of cable news. MSNBC is, functionally, my white noise machine—it’s what I put on my television when I’m not watching something. I get information from it, sure, but that’s incidental; that’s not why I have it on, and really, that’s not what cable news is there for anyway.

What cable news has instilled in me, above all, is an overriding, omnipresent awareness of just how little of what people tell you can really be believed. How easy it is to mischaracterize, or prevaricate, or outright lie, with a straight face and a clear conscience, and sleep soundly that night.

I’m talking, of course, about the case of illustrator Tess Fowler v. writer Brian Wood. I could never rehash all the gory details anywhere near as well as Eleven-ThirtyEight guest contributor extraordinaire Becca Hughes (she of yesterday’s Dark Horse vs. Marvel piece) recently did over at her LiveJournal, so if you’re somehow reading this without knowing what the deal is, head on over and catch up.

The above, I have little choice but to point out, is not my way of saying I don’t believe Tess Fowler’s characterization of the story. And it’s certainly not my way of saying her words shouldn’t be taken seriously, and broadcast from the highest of mountains. I believe the primary job of the media in a situation like this (and let’s just pretend for a moment that a piddly site like this counts as “the media”) is to do just that—broadcast the details in as level-headed a manner as possible, and foster as substantial a conversation as possible about the perils of sexual harassment and male privilege in what’s supposed to be a sector of our culture where everyone can feel welcome.

What I’m way less comfortable with, though, is rendering judgment—especially moral judgment—on people I do not know, regarding events I did not witness. If Dark Horse or Marvel released Brian Wood from his contracts, or if SDCC banned him from the convention floor, or if Tess Fowler pressed some sort of charges, I would see those as understandable responses that people should be made aware of, irrespective of the extent to which I agreed with them personally. The media can and must be vociferous in its advocacy, but it can do so without surrendering to ardor or moralism—because that’s what everyone else is for.

Furthermore, while Eleven-ThirtyEight is the very definition of an opinion site, I very much don’t want it to be a “yeah, me too” site. I struggled for a bit on whether I would talk about this here at all, partly because I try to form my conclusions very carefully, but also because most of what gut reactions I did have were already covered by Becca, Tricia Barr, Dr. Nerdlove (who, PS, writes some awesome stuff), and Dunc. Brian at Tosche Station and I had some subtle differences early on, but after going back and forth a bit on Twitter with him and Mark Newbold from Jedi News I don’t think we’re really all that far apart.

So what, then, is left for me to say about it? What do I have to contribute to this conversation, beyond an echo?

Getting back to that title up there—what most strikes me about this situation is the disparity between how geek culture (a blanket term I’ve settled on mostly for rhetorical convenience) sees itself and the reality of a group of interlocking industries that have largely set the tone for twenty-first century culture while remaining abnormally mired in vile, destructive behavior out of the 1950s.

It seems to me that, well, the behavior itself isn’t all that abnormal. One only needs to look at Tricia’s tales of woe from her time as a civil engineer to see that anywhere men—almost always straight, white men—retain their power from the days before women’s rights, some subset of them will use that power to extract every bit of sexual favor they can from the women around them. In the case of Brian Wood, they can even do so while remaining vocal and, frankly, effective advocates for those very rights.

So what about that disparity I mentioned?

Here’s what’s different about geek culture: deep down…we think we’re special. We grew up ostracized from, or even tormented by, what we viewed as the “normal” people, because we were socially awkward and/or had unusual interests and/or did unusually well in school. But all the while, we came to believe that our eccentricity made us better, somehow—more engaged, more open-minded, less reflexively blinded to hardship.

And I suppose that’s true to an extent—geeks are likely more conscious of hardship. We may, conversely, experience joy more keenly. We’re almost certainly smarter. But at least in my experience, we’re just as prone to avarice, intolerance, and cruelty as everyone else. Marry that with the fact that our chosen little collection of subcultures is suddenly the focal point of a trillion dollars’ worth of worldwide attention, and you can start to see how that newfound popularity might be hard for some people to handle. It’s not that we’re unusually misogynistic, it’s that we’re not used to power—little more so today than thirty years ago. But when we’re given that power, deep down, we feel more strongly that we deserve it. Our actions feel purer, our biases more justified, and our needs more reasonable. Like all the best antagonists, we believe wholeheartedly that what we are doing is right, by the simple fact that we’re the ones doing it.

I’m not here to defend Brian Wood, any more than I’m here to demand his head. But I do have to admit that boycotting the work of one man—and in so doing, boycotting any number of artists and editors with whom he collaborates—seems like a very knee-jerk and capitalistic way of targeting the top of the iceberg while ignoring the behemoth underwater. If misogyny is a cultural problem in the comics industry—and everyone agrees that it is—then you have to fight the culture, with bigger weapons than a marginal loss of income.

Which gets me back to the media. One of the perks of all our mainstream attention these days is that those in charge have way, way more fans to answer to. And no one has to answer to fans more frequently and publicly than comics creators. Brian Wood being made to go away may solve the Brian Wood problem, but the sooner he’s forgotten, I think, the sooner the attendant lessons are forgotten. Wood continuing to be a major figure in comics, and having to answer for his failings at every con, and in every press interview, for the rest of a long and high-profile career—or at least until we’re convinced he’s changed—would force his fans to live with this issue from now on; and as future creators themselves, they’re the ones who really need to learn from it. Superficial though it may have been, he was already a powerful advocate for feminism, so we should see this as an opportunity to make him an even better one.

To put it simply, I don’t believe in executions. I believe in penance. And I want Brian Wood to stay right where he is.

4 thoughts to “Geek Culture Doesn’t Have a Woman Problem, It Has a Geek Problem”