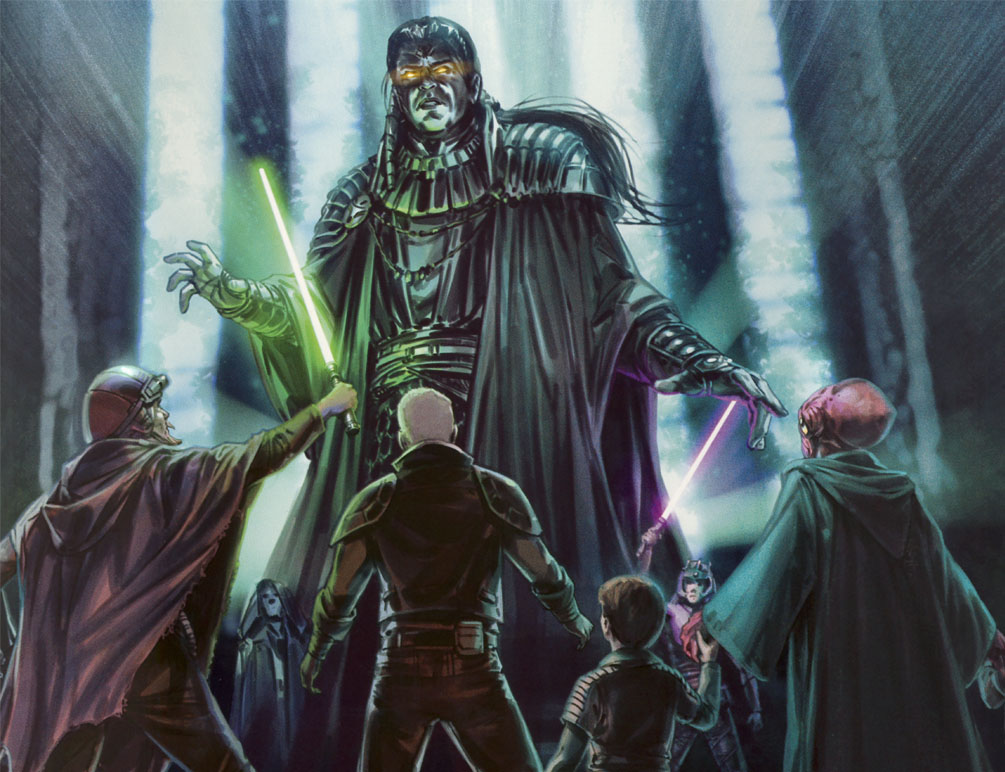 In the first three installments of this series, we looked at how a reborn Expanded Universe might take advantage of the opportunity for a fresh start offered by the announcement of the Sequel Trilogy to build on its various strengths, improving the treatment of certain elements and elevating others from being merely good to potential greatness. That is not to make the claim, however, that the existing post-Return of the Jedi continuity is entirely without its flaws. Quite the opposite, in fact, as more than a few readers are likely willing to attest.

For the latter half of the series, we’ll be taking a somewhat more critical approach, turning an examining eye upon the structural weaknesses of the universe in the decades following the Battle of Endor, and looking at how a new beginning might enable us to improve what we find to be less than ideal and set what has gone astray back on the right path in addition to reinforcing that which is already fundamentally sound.

Much has been written on the topic of the notable lack of diversity in the ranks of the resurrected Jedi Order (and in the broader universe, but that’s a subject to be discussed another time). Pull up any image of the assembled members of Luke Skywalker’s weekly lightsaber club and, more often than not, you’ll find it dominated by white human men. For obvious reasons, this is a highly undesirable image to present to a new generation of fans, both on the big screen and in print, to say nothing of the criticism that it’s regularly drawn from existing readers.

Permitting the situation to continue as it is accomplishes nothing of value and does only more harm to the image and reputation of the franchise – it pushes people away, and fails to draw any in. While some may advocate simply adding a new layer of diverse characters on top of the existing cast, I feel that this is still a patchwork solution – at best, you’re charting the adventures of these new Jedi around the major events on the galactic stage, most of which have already been well established as having their outcomes decided by preexisting (usually white, usually human, usually male) characters, perpetuating the idea that anyone else exists only to fill out the background.

With a fresh start, we can avoid this problem from the very beginning. In-universe, we can establish a more diverse and inclusive Jedi Order, as we would expect of an organization founded by a member of the motley conglomerate that was the rebel alliance, and take the first important steps toward rectifying the severe demographic imbalances among the major players of the galactic game. Out-of-universe, given the franchise’s notorious habit of thoroughly exploring the backgrounds of each and every character to appear onscreen (and even some that don’t), we can stack the deck for future stories featuring a wide variety of protagonists; male, female, white, nonwhite, human, and alien alike.

We can show both new and old fans that we’re able to adjust with the times and embrace change, and that accepting diversity is a simple fact of life in the 21st century and not something that we should shy away from. If we are just willing to reach out, we have the opportunity to take a bold step forward and establish a name as a franchise that doesn’t drag its feet and cling to old ideals out of blind nostalgia and that is willing to overhaul its image as it moves forward into a new stage of its life.

But that’s enough about that, for the moment. The problems of uniformity in the New Jedi Order extend well beyond the composition of its membership. Unlike the Jedi of old, Luke accepted initiates of all ages and from all walks of life, as opposed to taking possession of them in infancy and indoctrinating them with his philosophy. As a side effect of this change in recruitment procedures, this new generation of Jedi was at least admirably much more diverse in terms of background and personality than their precursors would prove to be. They continued to dress as they did before they took on their new roles, and wielded a virtual rainbow of lightsaber colors – from Lowbacca’s bronze to Tenel Ka’s turquoise.

In the aftermath of the release of the Prequel Trilogy, however, the New Jedi Order has increasingly come to resemble their predecessors, abandoning their sense of sartorial individuality in favor of desert hermit robes and a return to the blue-green binary lightsaber scheme of days long past. If one were to stand the Jedi of the New and Old Republics side-by-side, with no knowledge of the characters themselves, there would be little reason not to assume that they hailed from the same era and order.

For all the criticism the Old Jedi Order draws for their high-handed cloistered monasticism, their successors have hardly been any more successful. In a handful of decades, Luke Skywalker seems to have lost or come close to losing more disciples to the dark side and other insidious threats than Yoda did in the vast majority of his lifetime. No sooner do they resolve one crisis than they find themselves thrust into another, the fate of the galaxy constantly hanging in the balance, barely ever given time to rest or reflect on their accomplishments and failures.

Their level of internal dissent and dysfunction seems to increase with every new novel, to the point where their own temporary leader died trying to prevent his fellow Jedi from pursuing a course of action he was opposed to. Without the guiding hand of Luke Skywalker to pull their strings, the Jedi seem incapable of acting like anything more than squabbling children armed with weapons they’re incapable of wielding responsibly. This is not a success story – this is a sick, broken system that, far from fixing the flaws in the old ways, seems determined to exceed them. Is this truly the image of Luke Skywalker’s life’s work that we wish to immortalize on screen and in print? A Jedi Order that, far from preserving peace and justice throughout the galaxy, cannot even ensure either within their own halls?

When discussing how to improve the portrayal of the New Jedi Order, its foundation is another subject worthy of discussion. When Luke began his journey in search of arcane lore, there was very little concrete information about the ways of the Jedi for him to find, both in- and out-of-universe. Before the development of the Prequel Trilogy, we had only the (vague and questionably valid) words and examples of Obi-Wan Kenobi and Yoda to draw upon. In the course of his travels, he encountered Force-wielding sects with unusual applications of the Force such as the Fallanassi and the Witches of Dathomir, and encountered a few scattered remnants of the last days of the Old Republic, such as Joruus C’baoth and Callista Ming.

When the Prequel Trilogy was finally presented to us, however, the Jedi Order we were given bore little resemblance to the scattered bits of information Luke had been able to pick up in his (mostly futile) search. As strange as it may seem, the new Jedi seem to have learned more about their predecessors four decades after Endor than Luke did actively searching four years after.

A new journey of discovery could be one written with the invaluable benefit of hindsight. Handicapped by the great dearth of information regarding the fall of the Republic and the Jedi of old between the releases of Return of the Jedi and The Phantom Menace, it was essentially impossible to deal directly with any of the major issues of that time – how could Luke have sifted truth from lie when we did not even know what the truth actually was? With no information on the nuances of what the Jedi believed or how they lived, Luke’s search was doomed to failure from the start – he could not discover what we could not provide him with.

He could hardly follow in the footsteps of fugitive Jedi in search of survivors when we knew next to nothing of the execution of the Purge and how many might have survived or where they could have gone. Prevented from writing with authority on any subject that might later be contradicted by Lucas, our authors were boxed in, unable to exercise full creative freedom when Luke sought to fill in the blanks in his philosophy classes, leading to the situation we find ourselves in now where an in-universe regression to the older ways has been dictated by the out-of-universe release of the prequels.

All things considered, I don’t think it would be an exaggeration to say that the portrayal of the New Jedi Order will be one of the most significant defining elements of the Sequel Trilogy and the Expanded Universe going forward, and I can’t help but feel that, as it stands now, its present form does more harm than good for the universe and the franchise as a whole. If the history and present state of the brotherhood were to be exported to the sequels free from any major changes or alterations, I cannot imagine it as being anything other than a resounding disappointment.

The Expanded Universe has failed to give us an institution deserving of preservation, and certainly not a worthy successor to Obi-Wan’s description of the great and ancient order in A New Hope. No matter how many new stories are written or where the future may take us, nothing will ever be able to fully make up for the dismal circumstances and dire straits they’ve found themselves in time and time again. Starting over would not just allow us to add depth and credibility to the order, but also to make the name of the Jedi something worthy of admiration once more.

6 thoughts to “A Case for Starting Over, Part IV: Guardians of Peace and Justice”