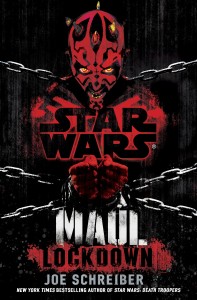 Unfortunately, if you were hoping for a story that would explore such issues, then Star Wars: Maul: Lockdown is not the book for you. While Maul’s face does grace the cover of the book, his character has remarkably little impact on the story itself, serving as little more than a convenient explanation for the protagonist’s formidable martial prowess and otherwise contributing very little to the development of his personality. With the excision of a handful of chapters and the occasional mention of his master, it would not be at all implausible to suggest the book could be rewritten to feature an entirely new, even non-Force sensitive protagonist with little difficulty.

Tasked by his master with locating a mysterious and reclusive arms dealer by the name of Iram Radique who has concealed himself and his operations within the confines of a combination privately-operated prison and gladiatorial gambling operation, Maul enters the prison disguised as a common mercenary. Forbidden from bringing his iconic double-bladed lightsaber with him or drawing on the Force during his incarceration, Maul is forced to rely entirely on his own natural physical and mental capabilities to survive and carry out his assigned mission, finding himself pitted against such deadly (and somewhat unlikely) opponents as a Yuuzhan Vong warrior and a ravenous wampa taken from the desolate tundra of Hoth.

Though unrelated to the contents of the book itself or the author’s work, I should also note that, as is unfortunately common, the publisher’s summary for the novel appears to have somewhat exaggerated the stakes and importance of its events. While Maul’s mission does involve the acquisition of a powerful weapon, it is certainly not capable of conquering the galaxy or obliterating the Jedi, and neither Maul nor his master nor his master have any intention of using the device to do so.

And while we’re on the topic of his master’s master, though the novel was advertised as “a thrilling follow-up to Star Wars: Darth Plagueis,” it would be better described as something of a brief side story or companion to Luceno’s work, or an interquel between chapters, for the Muun Sith lord appears only for a few brief and underwhelming occasions, and the entirety of the book’s plot serves merely to elaborate on an event that occurred in Plagueis that did not previously seem particularly in need of elaboration.

While such inflations are hardly uncommon in the world of published fiction, it still does nothing to lessen the inevitable disappointment of any reader who takes the description and face value and then finds the truth to be something quite different altogether.

Those with a discerning eye for matters of continuity may find Cog Hive Seven, as Maul’s temporary home is known, unusually diverse in the demographics of its denizens, perhaps even enough to stretch their suspension of disbelief. Apart from housing an infamous arms dealer of sufficient notoriety as to draw the personal attention of the Dark Lord of the Sith and his pet assassin, it houses Noghri and Chiss residents in addition to the Yuuzhan Vong and wampa mentioned previously, and later draws the (unwelcome) scrutiny of the legendary gangster himself, Jabba the Hutt, who serves to provide the novel with one of its most memorable scenes.

If these elements did already not constitute a chaotic melting pot by the galaxy’s usual standards, it proceeds to throw the Bando Gora cult and its fallen Jedi leader, Komari Vosa, into the mix, both having originally debuted in the 2002 video game Star Wars: Bounty Hunter. Speaking of things showing up where you least expect them, special mention must also go to Rancor Aid, an exceedingly obscure beverage with its first and formerly sole appearance being in An Empire Divided, the expansion pack to the now-defunct 2003 massively-multiplayer online role-playing game, Star Wars: Galaxies.

While the novel and its author are undoubtedly to be praised for drawing upon such a variety of elements and sources, it also comes at the price of a certain degree of vastness and depth in the galaxy, by tying together so many prominent characters and species that previously had little or no connection to each other.

Of course, no review of Lockdown could be considered fully complete without taking note of its connection to its author’s previous contributions to the universe. Death Troopers and Red Harvest being extremely rare doses of the horror genre injected into the franchise, Schreiber certainly does not fail to deliver in terms of sheer, brutal, bloody carnage. More than it’s connected to any novel previously featuring Darth Maul, Lockdown could be considered first and foremost to be a thematic sequel to its author’s previous works, even briefly delving into the supernatural side of things in the form of the Wolf Worm, a sarlacc-like entity that absorbs and preserves the minds of the victims it devours.

Whether that works in novel’s favor or hinders the narrative is best left as a matter of personal taste. Each of Maul’s cage matches is described in explicit and comprehensive detail, as are the methods by which he mercilessly and savagely ends his opponents’ lives. If it is loving and detailed descriptions of head-turning decapitations, bone-gnawing cannibalism, gut-wrenching disembowelments, copious amounts of blood and gore, and other assorted spillings of viscera that you desire, then this book most certainly belongs on the top of your to-read list. If the preceding lines give rise to feelings of nausea, queasiness, or disgust, however, then it may be best to steer clear of it.

More than Maul or any of the other characters appearing on its pages, it could be reasonably argued that violence and brutality are the novel’s true protagonists. A small cast of your run-of-the-mill cutthroat inmates organized into your stereotypical rival prison gangs (the cannibalistic Bone Kings and the nondescript Gravity Massive), cruel and corrupt security guards, and the profit-driven warden and her administrative staff round out the roster, but their existences seem to serve primarily as fodder for the novel’s woodchipper-like enthusiasm for grinding its troupe of characters into unrecognizable meaty pulp.

A handful of characters are gifted somewhat deeper glimpses into their pasts and psyches, most notably a father-son pair of inmates contemplating the impossible by attempting to escape a prison thought inescapable, but nothing so detailed as for the reader to remember their existences beyond the moment they turn to the last page and close the book.

The bloodshed is infused with considerably more life and personality than any of these, and leaps from the pages with such vigor that it seems clear that this is where the author’s true passion lies. While tales of wanton slaughter have their place and I’m not one to be averse to an excursion into a genre Star Wars doesn’t typically involve itself with, I can’t help but be somewhat disappointed by the approach taken by the novel, and feel that it would be best if future experiments with horror (and other genres) don’t creatively box themselves into the metaphorical corner with the need to wedge themselves into the lives of well-known preexisting characters when entirely new ones could serve just as well.

3 thoughts to “Maul: Lockdown Review: Not For The Faint Of Heart”