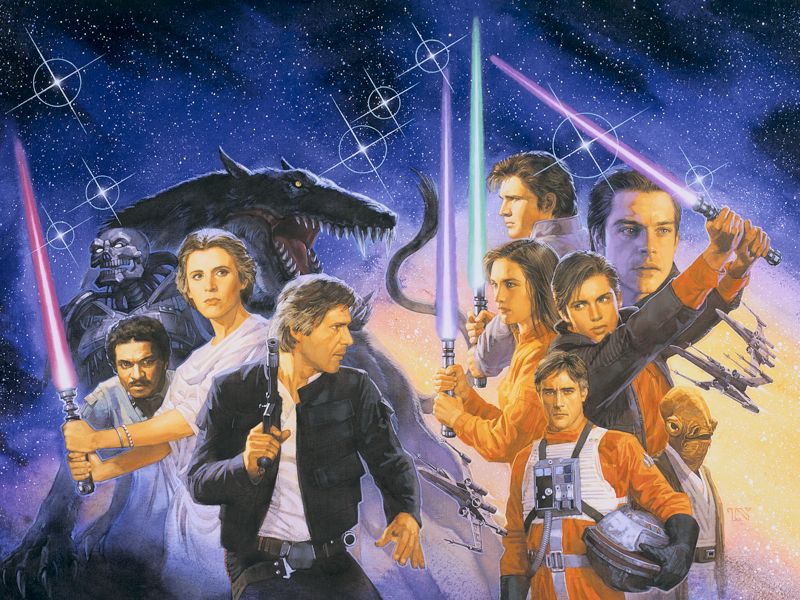 When we think of Star Wars, our minds usually leap first to the likes of Luke Skywalker, Leia Organa, and Han Solo. It’s a natural enough reaction. They’re Our Heroes, the iconic trio, the protagonists of the Original Trilogy, and more or less the defining figures of the entire saga given how most people view the prequels. But they do not stand entirely alone in the galaxy’s pantheon of heroes.

There were many who came before them, and there are many still to follow, for the tales we see on the screen are but a brief glimpse at the history of a much larger universe. What we will concern ourselves with here today, however, is the generation immediately succeeding the Big Three; their children, their friends, and those who would continue their work to ensure peace and justice in a galaxy that does not see enough of either.

Or, at least, that’s how it was always supposed to go. One of the great tragedies of the Expanded Universe is that the Next Generation has fallen well short of their predecessors. To a degree, this is not entirely unexpected. The events of the Original Trilogy were hardly ordinary days, and destroying two Death Stars and toppling a galaxy-spanning empire are no mean feats. One would not expect those that follow in their footsteps to equal their deeds, or even for their to be a need for them to.

But even so, one would expect that there would be no shortage of figures willing and able to step up and accept the mantle of authority, and not require constant salvation by their parents and teachers. Alas, the Expanded Universe has not only made a policy of attempting to exceed itself with a new galaxy-menacing threat with each new series, but also to have the next generation inevitably fail at handling matters themselves and for all to ultimately rest in the hands of Our Heroes, the Big Three (and company). Again.

When Luke turned thirty, he had personally fired the shot that destroyed the first Death Star, defeated Vader and Palpatine (the latter twice), earned the rank of general, and accomplished countless other feats worthy of being entered into legend, and was in the midst of reestablishing the fabled Jedi Order as the (supposedly) sole surviving inheritor of its traditions.

When Han turned thirty, he was an infamous and talented smuggler in possession of one of the fastest ships in the galaxy (and held the loyalty of a capable co-pilot), had graduated with distinction from the Imperial Academy after a childhood spent as a common beggar, and had played a vital role in the destruction of two Death Stars (the second after spending far more time as a human popsicle than would be considered healthy).

When Leia turned thirty, she was the elected leader of the free democratic galaxy, had seen her entire world destroyed before her eyes and had still gone on to avenge it and help bring down the Galactic Empire, had given birth to three children within the past two years, and was, of course, married to Han Solo.

By comparison, at thirty, Anakin Solo had been dead for over a decade, one of the countless casualties (which also included Chewbacca) in the exercise in excessive cast trimming that was the Yuuzhan Vong War. Jacen Solo, who survived and emerged a hero of that conflict, was in the middle of taking a five-year sabbatical to seek out and unlock the arcane secrets of the Force, but was also soon to return and take up the mantle of Dark Lord of the Sith like his grandfather before him, after which he would make himself dictator over the galaxy and kill his uncle’s wife, and eventually be slain in single combat by his twin sister.

Jaina, as the only Solo child remotely likely to see forty, spent several of the years leading up to thirty speaking in plural and rubbing forearms with friends as part of an insectoid hive mind. When not acting as the Jedi Order’s favorite hachetwoman (our puzzling out the meaning of a title the person who gave it to her didn’t even understand), she’s spent half her life (and twelve years out-of-universe) romantically oscillating between Jagged Fel and Zekk, a dilemma which only recently saw its final resolution with her marriage to the former.

And what of their friends? Tahiri seems to have made a life out of being the galaxy’s preferred chew toy. Captured and warped by the Vong, from which she only partially recovered, she was indoctrinated into the same hive mind as Jaina, manipulated into becoming Jacen’s Sith apprentice thanks to never being allowed to get over Anakin’s death, had to make a living as a bounty hunter, assassinated Gilad Pellaeon (for which she was later put on trial and sentenced to death), and has only recently been able to return to the Jedi fold.

Tenel Ka, perhaps wisely in retrospect, gave up at being a main character years ago, and went back to Hapes to reign as queen. While technically providing the opportunity for character growth, her appearances on-page are sporadic at best, and her most important role in recent memory was having a child with Jacen while he was drinking heavily from the dark side juice. It speaks volumes about the state of the next generation that, unable to protect her daughter, she was left with no choice but to give her up to be adopted by the child’s grandparents and Our Heroes, Han and Leia.

Zekk is more likely to be remembered for his losing out to Jag when it comes to Jaina than anything he’s ever managed to actually accomplish. Lowbacca is, at best, a D-list character who only remains relevant because most other new Jedi characters die before they get a chance to establish themselves. Many memorable young Jedi have been created over the years, but very few have endured, and none have been able to achieve anything remotely resembling a position of prominence. With the old guard clinging to plot relevance like a dying man to a life preserver and a staggering young adult casualty rate, there have been few to no opportunities for their heirs to grow as individuals and establish themselves as independent adults.

The only notable pilot to carry on the legacy of Wedge Antilles and Rogue Squadron who doesn’t also wield a lightsaber is his daughter, Syal, and she hasn’t played an active role in the universe since partway through Legacy of the Force. Of smugglers and soldiers and ordinary men thrust into extraordinary circumstances in the vein of Han Solo, there are none to speak of. The only work to deal with such characters in the “present” is Aaron Allston’s X-wing: Mercy Kill, which is so exceptional precisely because its focus is so uncommon.

Even the New Republic and the Galactic Alliance, successors to the political entity that was the rebellion, range from depressing to downright embarrassing in their failures. The moment Leia stopped being in direct control of the New Republic, the manipulative and self-serving Bothan Borsk Fey’lya was elected, and the end of his term (along with his death) came with the invasion of the galaxy by a race of extragalactic sadomasochistic religious fanatics bent on galactic domination and the murder of anyone who didn’t share their unique outlook on life.

Cal Omas, his successor, had his election rigged by (you might’ve guessed) Our Heroes, and remained in office until his deposition at the hands of Darth Caedus (alias Jacen Solo). After the new dictator was ousted by the combined efforts of his parents, his uncle, and his sister, the Galactic Alliance inexplicably elected infamous Imperial war criminal (and the former lover of Grand Moff Tarkin) Natasi Daala as its new leader, whose completely unforeseen dictatorial and anti-Jedi tendencies would lead to her removal from office by (again) Our Heroes.

What followed was, if at all possible, even worse, including a triumvirate in which two-thirds of the members were plotting the return of the Galactic Empire and the remaining third was responsible for the death of Jedi Master Kenth Hamner. In the most astounding act of democratic subversion so far, an eldritch horror in the guise of a representative of a world newly admitted to the Senate was soon after elected to the office of Chief of State, while key positions in the heart of the galactic government on Coruscant were also infiltrated by members of the Lost Tribe of the Sith, who had only recently acquired the ability to the leave the world upon which they had been stranded for millennia.

As we come to the present, what we’re left with barely even constitutes a coherent story anymore. What we have been guaranteed is the continuing Adventures of the Big Three, no matter how absurd the crisis we have to manufacture for them and them alone to solve, or how many of their children or ostensible successors we have to kill in the name of drama.

The story of the next generation of Star Wars is not one of struggle and triumph, or of moving forward and learning from the mistakes of the past, or even of loss and recovery; it’s the story of blatant incompetence, pointless tragedy, and a complete and utter failure to achieve any sort of lasting peace. The torch has not been passed and the next generation has not been able to come into their own because most of them are either dead or ignored in favor of people with broader name recognition and greater marketing potential.

If the Sequel Trilogy (and, indeed, Star Wars itself) is to have any hope of meaningfully contributing to the universe and being something more than a mere nostalgia trip reliant on cheap manufactured drama, then it needs to shatter this miserable situation as soon and thoroughly as possible and accept that it is time to move on and let somebody else take the wheel. If the cost of letting the next generation come of age and escape the shadows of their parents are the stories that have made one colossal joke out of their lives, then that is a price I would gladly pay.

8 thoughts to “A Case for Starting Over, Part V: Passing the Torch”