The Sequel Trilogy is going to need some unsavory characters and who better to lead them than someone who already exists: Talon Karrde. First introduced in Timothy Zahn’s Heir to the Empire this character’s story soon takes on a life of its own as he plays both the Empire and the Rebellion in an effort to make the most money and save himself. Paired up with Mara Jade, Karrde brokered information in an organization that would rival any in the galaxy. In a time when our known scoundrels like Han Solo and Lando Calrissian were becoming somewhat respectable, Karrde filled the role of semi-reputable smuggler. As a reader it was a breath of fresh air when comparing Karrde’s organization to that of the Hutts from the movies.

Something I felt was missing from the Prequel Trilogy was the scum of the galaxy. We were given a glimpse during Episode I and the podrace but overall there was no underdog can be good can be bad guy to cheer for. We almost had too much of the Jedi in the Prequels and that pushed out other elements of the OT that made it work so well. It is difficult to know where one could have fit in such a character when the story was largely about Anakin Skywalker’s fall, but it was definitely something I noticed while watching the movies that was missing. Now you could argue that such a storyline would simply be rehashing Han Solo’s story, but in the case of Karrde he chose differently. Han chose the Princess and the Rebellion. Karrde chooses to be head of the smuggling group that takes over after Jabba the Hutt dies. He runs things differently and his people are loyal to him because of it. He doesn’t go around killing randomly for entertainment or to feed his pet Rancor. Karrde instead adds a little bit of honor to the smuggling world.

The Sequel Trilogy should reestablish smugglers as a large part of the galaxy. The Expanded Universe has done an excellent job of allocating page time to the smugglers and they’ve done a good job of fitting into the stories each time to create an enjoyable experience for the reader. The comics from Dark Horse were especially good at using these characters. Both John Jackson Miller and John Ostrander/Jan Duursema successfully integrated smugglers into their stories to encompass the overall feeling of the OT. The Knights of the Old Republic series used smugglers especially well. These types of characters tend to come across better in comics or on film because they can and should be all sorts. This is a great area to incorporate as many types of species and ethnicities as possible. I see these groups as the working middle class’ protests to the tyranny of the Empire and would like to think that would be where I’d end up if I were a Star Wars character.

It is my hope for smugglers to be established because these are the types of offshoot stories that I find the most entertaining. There are an overabundance of ideas for smugglers to be involved in that don’t resort back to the baddest Sith ever to square off against. I’ve stated before that I don’t want anything released to diminish the awesomeness of Darth Vader and the Emperor as bad guys and I am fearful that we’re going to see this happen in order to get spectacular lightsaber fights on film. Instead I’d rather see intelligent bad guys with lies, deceit and treachery playing both sides for their own gain. 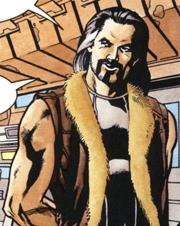 There is plenty of space for these types of characters in the new Star Wars series and who better to lead them than an already established character in Talon Karrde. I mean come on, look at this guy. He would look quite stunning on screen. Excuse my while I drool about the prospective actors that they could get in to play this guy…Just kidding. Karrde is the perfect blend of intelligence, suaveness and honesty to become the next big thing for Star Wars. It still amazes me after all these years when I talk to people about Star Wars that they want to talk about Han Solo. He was just an ordinary guy, a smuggler who got caught up in so much more than he bargained for. In a series of lightswords, robots and space ships people still look for the ordinary guy to root for.

While I believe the PT didn’t have the right fit for a character like this the ST does and needs to have one. There is also an added bonus for Karrde in that he gives my other Escape Pod character, Mara Jade, a way in. With so many unknowns for the future of Star Wars I do want to see them go back to their roots a bit and include slicers, hackers, information trading around the political arenas as well as the Jedi/Sith that have come to represent Star Wars. I want to see several different arenas for the characters to go to war on. The younger generation of Jedi can physically battle while the older generation of characters can battle over information and the right to rule the galaxy in other ways making the need for characters like Karrde and his organization necessary for the story.

The ST cannot forget characters like Karrde, Booster Terrick, Mirax Terrick and Ghent. These are the ordinary guys who make their way through a life full of forces beyond their wildest imaginations. They give us the little guy to cheer for. They also give us a wide variety of technology and ships to look at like the Wild Karrde pictured above. It is my hope that the ST does not rely just on everything from the OT that made it so wonderful like the Millennium Falcon, but that they are able to add their own touches and give us wonderful new space ships to adore as well as new characters to go along with those ships.