Looking back at my previous article Last Stands and Final Moments: When Killing Your Hero Works and When it Doesn’t I feel like I did a disservice to Michael Stackpole and Aaron Allston by not including people from the X-wing Series. I was trying not to go overboard with characters and didn’t feel like I could pick just one without going for an in depth discussion of all of them. So thus, Part II of Last Stands and Final Moments was born. My last article on this topic sparked some good discussions along with requests to look at a few other characters so if you have other requests please pass them along. As crazy at it sounds, I still enjoy nothing more while reading a book than having an author correctly kill off a beloved character while making me feel the loss as if I were there in the story with the other characters. I believe this is one of the reasons I continue to pick up Star Wars books. The beginning of the EU saw several character deaths that were so well done that it is possible I’ve been spoiled with a high standard of how a character should be written to exit a series.

“Lujayne was a fighter, so having her die in her sleep was, well it just made it worse.”  – Wedge Antilles

Lujayne Forge‘s death was the first semi-important character death in the X-wing series. Michael Stackpole made things real for the reader by killing off a character, who we all expected to die in the cockpit, in a different manner. Lujayne was never written as the best or even close to the best pilot, but she was a key person in bringing along the development of Corran Horn’s personality who is one of the main characters. Her death furthered the story by reminding us how the Empire operated and what the Rebellion was fighting for. With the death of the Emperor in RotJ it is easy to think that the Empire’s way of being could have changed. Her death, being killed in her sleep and not in the cockpit, brought to our attention that the Empire really did need to be stopped. Her death was shown to have impacted the other characters and there was a tribute done with the others who’d lost their life in the attack. This specific way of handling her death helps the reader through the stages of grief.

These next two aren’t really dead. What? Why would you do this? Eh I’ve gone back and forth about it and in the moment these two characters’ fake deaths caused me much grief. Corran Horn and Wes Janson each had a death where for a little bit the readers and the characters in the story thought they were dead. Thankfully, Corran’s almost death lasted for not many pages but I remember being totally stunned and had to stop reading because I thought he’d died. I think the impact would’ve been less had Stackpole not killed off other pilots before then. I knew it was a possibility within the story because of how he’s handled other deaths. Wes Janson’s death lasted most of a book. This one was more difficult because the Rogues were not really allowed to grieve or shown to be grieving which made it more difficult for me to move past it. The first time I read the book I was very distracted by the fact that I thought I’d lost Janson as a character. I think my joy was appropriately summed up by Wedge’s reaction to seeing Wes alive. Now I don’t recommend authors doing this to their readers a lot but within the story these fake deaths worked.

“With my name, Uncle. My commanders were afraid of putting me in the line of fire, for fear that I’d be killed…and that you’d blame them.” – Jesmin Ackbar to Admiral Ackbar

Upon my first reading of Wraith Squadron Jesmin Ackbar’s character was one that I truly thought was safe. Star Wars, by this time, was setting a precedent as far as name associations and survival. I was younger and missed the obvious foreshadowing of the above quote.

Jesmin’s death while shocking was vital to the development of the Wraiths as a unit. She was such a sweet and witty character whose death helped the Wraiths see how much they needed to work together and be a team. Her death also served to inform us how much of an impact the deaths of his people had taken a toll on Wedge Antilles. It was gut wrenching to read through the passage where Wedge tries to write a letter to Admiral Ackbar where he reminisces about people he’s lost over the years. 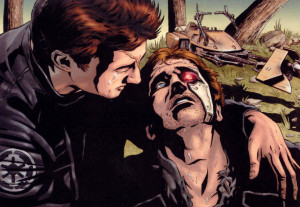 “I was just imagining what a sad galaxy this would be without my superior intellect and general state of wonderfulness.” Ton Phanan to Face Loran

Ton Phanan’s death is by far my favorite death in the entirety of Star Wars. Even typing the quote above made me teary eyed which continues to amaze me that Aaron Allston can make me continue to feel Phanan’s death even after all these years since having experienced it first hand. The X-wing series is something that I reread on a yearly basis but even though I know it is coming the story telling is so engrossing that his death makes me cry all over again every single time I read it. The duo of Face and Ton was so entertaining that it was hard to imagine them ever being separated. I cry for the loss of a hero. I cry for the lost laughs the two of them would give me. I cry for Face losing his good friend. This is the death that I’d wish upon any character having to die in a book. Your best friend going after you, knowing you’re still alive and hoping to save you. The realization that you can’t be saved but sticking with you so you’re not alone. A peaceful journey out of the story with a few touches of humor thrown in. Writing this I grieve for the loss of the author who gave us such a wonderful character death. When out and about in the online fandom I frequently see references to Phanan’s death and what a lovely impact it had on all of us because of the way it was written. Other authors should take note and read the sequence of Phanan’s passing before they write about another character death.

“Pellaeon to Fleet. Fleet, this is Admiral Pellaeon. I order you to place your vessels at the complete disposal of Admiral Niathal, and take down Jacen Solo, for the honor of the Empire—” ―Gilad Pellaeon

One last character death discussion for now and this one I’m kind of torn on. Gilad Pellaeon’s last words were very appropriate for his character. I like that he chose to reveal Jacen Solo as the bad guy to his fleet instead of joining sides and in doing do gave up his life in the hopes of stopping Jacen. I’m just not sure that a character who was around for so much (Five eras of Star Wars) deserved to die at all, let alone being assassinated by a minor character in a way that doesn’t quite make sense to me. Did his death serve to destroy the credibility Moffs since they chose to watch him die instead of trying to save him?  Did his death solidify how gone Jacen Solo was down the dark path since he ordered Tahiri to kill Pellaeon if he didn’t agree to help them? Was his death necessary to the promotion of Jagged Fel to being leader of the Imperial Remnant? I’d love to hear from the readers!

One thought to “Revisiting Last Stands and Final Moments”