One of the many things that drew me into the Star Wars universe was the detailed worldbuilding. For many of us, we started by seeing Tatooine and the idea of a fully desert planet with two suns, and then saw the coldly artificial Death Star and then the vibrantly alive jungles of Yavin IV. The prequels brought us Coruscant and many other worlds, and we saw not only the geography of planets but also customs and culture. There comes a point when it’s nigh impossible to keep track of the immensity of the GFFA without a few reference guides, and sooner or later, we run into guides written from an in-universe perspective. How their stories are told is in itself a telling view of how the GFFA views its own history.

We are all aware that our GFFA has witnessed years of catastrophic warfare. A common thread in warfare, real and fictional, is the loss of history and the challenges of telling the stories afterwards. When Luke first meets old Ben Kenobi and hears about the Jedi Knights, we realize in retrospect that thousands of years of Jedi history has indeed been utterly destroyed in only twenty years. Has the Empire really been in power so long, and so firmly, that the younger generation know nothing of the past? Real-world historical revisionism is a well-known phenomenon, and controversial subjects are often glossed over in the name of politics.

It’s not just the Jedi who have lost their history due to the Empire, and they are neither the first nor the last. Over the course of galactic history, the Jedi archives have been one of the foremost collections of knowledge about all sorts of obscure subjects. And suddenly we see the Jedi Temple burning, the Order destroyed, and no idea where all that knowledge went. The library world of Obroa-Skai is a treasure for scholars, and is heavily guarded as a result of the Jedi lore in its archives. The Empire establishes Human High Culture and does all it can to erase non-human species from prominence. Following the fall of the Empire, nonhumans start to come back to the limelight, as one of the hallmarks of the Rebel Alliance, and later the New Republic, is acceptance for all species. Suddenly, nonhumans’ stories are important, and the dominant culture of the Empire is no longer in charge of the galaxy. How does the New Republic rebuild? Suddenly, their charge is no longer just the politics of the galaxy, but also trying to repair the vast damage the Empire has done.

Jedi history has also suffered greatly under the Empire, and in just twenty years, the Jedi have fallen to the status of legends. Ben’s Force ghost reminds Luke that he is not the last of the old Jedi, but the first of the new. This charge is to restore the Jedi, and it occurs to Luke shortly after the Battle of Endor that his own training is rather incomplete and there is very little Jedi history left. We know due to the prequels that Jedi were chosen from birth, raised in a centuries-long tradition with vast knowledge at their fingertips, and all of that has been thoroughly lost. For that matter, as the New Republic slowly forms, Luke spends quite a bit of time not sure how to continue being a Jedi or how to learn anything further about the Force. The only ray of hope in this time is the discovery of the crashed Chu’unthor on Dathomir, complete with data disks and a Holocron. These become vital later in the establishment of the Jedi Praxeum on Yavin IV. Still, the problem remains that the Jedi know very little of their history, just as the rest of the galaxy is trying to figure out how to move on from the Empire. Slowly, more Jedi history comes to light, though it still takes many years to replace what has been lost. 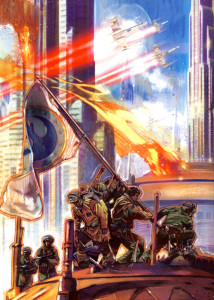 A striking example of in-universe history is during Dark Force Rising, when Luke questions the Imperial Palace’s archives about Joruus C’Baoth. As readers, we know that at this time in Star Wars publishing we did not know what happened in the Clone Wars. The limited information available to Luke resonates well with the limited information available to us, and we get the sense of being in a galaxy where much of the history is unavailable- perhaps much of it has been destroyed. Being part of the nascent New Republic, a government still trying to prove it’ll be able to exist, and seeing the confusion about which history to teach, reflects well with real-world history after a major war. Victors do indeed write the history, and it is possible for even well-regarded sources to be unreliable. We are given a rich sense of a galaxy sorting out just what has happened, trying to recover.

Take Union, in which we meet a group of “unreconstructed” Imperials trying to foil Luke and Mara’s wedding. We see them wander through a museum, seeing the New Republic’s slant on the war against the Empire. Every time we meet Imperials in this era, though a peace treaty has been signed, we still know so little of the birth of the Empire. We never hear anything about what happened before the Empire. And we hear the stories of aliens who have been very hard-hit by Imperial anti-alien prejudice, species whose stories could have easily been completely forgotten. As the New Republic grows, we get the sense that this galaxy is even larger and more interesting than we’d ever heard of.

And then everything changes when the Yuuzhan Vong invade. Just as the New Republic is more sure of its own peace and security, finally ready to start moving on, the entire galaxy is turned upside-down. As the Yuuzhan Vong invasion moves from planet to planet, everything is destroyed. Cultures that were still recovering from the Empire have now been destroyed again, and the loss of Coruscant devastates both the New Republic and its image.

It’s curious in the Legacy of the Force era that we hear so little about the Yuuzhan Vong War. A galaxy-spanning conflict more catastrophic than the Galactic Civil War should be more than a footnote in history, and possibly due to the utter disintegration of most of the galaxy, we hear almost nothing about the war. Is it possible that no historian really knows what to say? So much has changed in the galaxy following the Yuuzhan Vong War, and Darth Caedus certainly doesn’t help. And then we meet a Lost Tribe of the Sith. In a galaxy that has studiously avoided (or desperately attempted to escape) its own history for so long, suddenly finding ominous parts of it again isn’t exactly comforting.

The history of our GFFA is one fraught with galaxy-spanning conflicts, and a long enough period of sentient civilization that it’s easy to lose some of that history. As spectators, we have the unique perspective of knowing exactly what has happened, and knowing just how reliable in-universe sources are. It’s so easy to forget that when the Thrawn trilogy was first published, we actually didn’t know what had happened in the Clone Wars at all, and only by the time of Legacy of the Force were we fully aware of the events of the prequels. It actually fits in well in-universe. The Essential Guide to the Force is written from an almost entirely in-universe perspective, and it flows quite nicely as a result. It was published soon after Sacrifice was released, and the last statement we hear about Mara Jade Skywalker’s death is “further information is only available to sanctioned Jedi.” We know what happened, but the little touch of realism acknowledged with this statement fleshes out what otherwise might be a rather dry reference book.

Why does history matter? From an in-universe perspective, a war-torn galaxy has many stories to be told, maybe even some that could prevent future wars. The Jedi feel an obligation to protect and defend the galaxy, especially from Sith and other such things, and knowing history is an excellent line of defense. Governments will need to be able to discuss the mistakes of their predecessors. But in a galaxy that has experienced close to sixty years of warfare, how do we tell the story of the wars? Who is left to protect the history that has barely survived? And most importantly, can our heroes learn from the mistakes of the past?