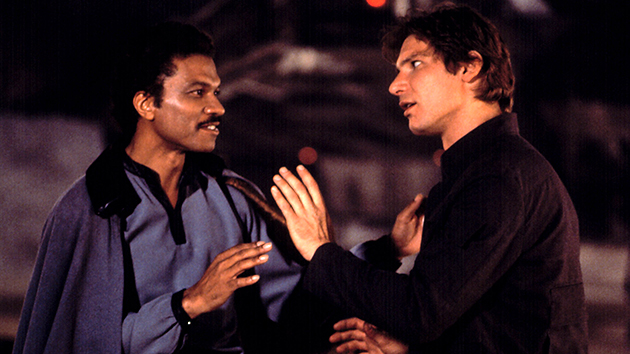 Now that we’re officially living in a post-reboot Galaxy Far, Far Away, one could be forgiven for thinking my EU Explains series isn’t really relevant anymore. I, however, think no such thing. I love the Expanded Universe largely because of the context and depth it gives to the many ambiguous bits in the movies—the spice mines of Kessel? Bothans?—and even if it can no longer be entirely relied upon to bear out in future content (which, let’s admit it, was always the case), even the most oft-contradicted sources present a fascinating superposition of possibilities for those bits, and will almost certainly be sprinkled into the new canon here and there; likely even the Sequel Trilogy itself.

Understanding the possibilities, I think, is just as valuable as knowing things for certain. To that end, for the time being I’m going to capitalize on this lack of certainty and begin exploring topics that even the EU was never quite sure about—the bounty hunter(s) on Ord Mantell, for example, or how the Rebels got a hold of the shuttle Tydirium. I may even untangle the myriad tales of the Death Star plans. But first…

19. What happened between Han and Lando before The Empire Strikes Back?

I suspect that Lando himself would disagree with me if you asked him at the wrong time, but if the young Han Solo was the ultimate rolling stone, Lando Calrissian was the ultimate settler. While his earliest known adventures, ironically, involved quasi-Indiana Jones-style relic hunting and the like, upon making one of his first big scores, Lando went to the smuggler’s moon of Nar Shaddaa and bought himself a used-ship lot—the least Han Solo decision imaginable. Han needles him about it in Empire, but I’d argue that “businessman” is Lando’s natural state. 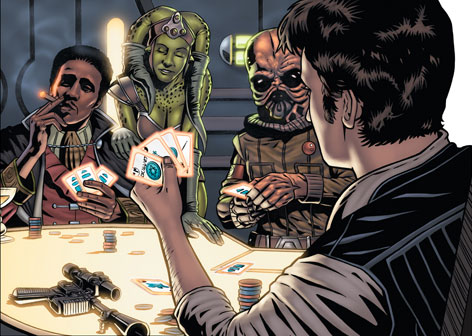 Han, meanwhile, dragged insta-bility around with him like an anchor. Lando first comes across Han as a captive of Boba Fett en route to claim a Hutt bounty (not that bounty; an earlier one. I know, right?). Lando was looking for someone to teach him how to fly his recently-acquired YT-1300 freighter, and provides a timely rescue in exchange for Han’s services.

A couple years later, both friends wind up in a sabacc tournament on Cloud City (long before Lando ends up running the joint), and when the stakes get high, Lando antes up with a marker good for any ship on his lot. Han wins the pot, and to Lando’s dismay, he passes up all the fancy-pants liners in exchange for their mutual favorite, the Millennium Falcon. Lando’s a magnanimous loser, so they remain friends, but it’s still a tough hit for the born card shark. Let’s call that Strike One.

Strike Two is another couple of years later—about a year before A New Hope. Han’s old flame Bria Tharen has fallen in with the Rebel Alliance, and is looking to hit the Hutt spice operation on the planet Ylesia (with which both she and Han have a messy history). Han’s still carrying a torch, so he quickly jumps on board and then recruits several of his scoundrel friends to transport Tharen’s strike force to the surface and aid in the battle. It doesn’t go well, but they win the day and secure a hefty profit—which Tharen then absconds with in the name of the Rebellion, leaving Han and company broke and screwed over. Lando does not take this well, and in the heat of the moment, threatens to “blow Han’s head off” if he ever sees him again.

For a couple years—in real time, I mean—that was all she wrote. Then came the tale of the Yavin Vassilika, a priceless statuette sought by three different Hutt lords. They decide to hold a friendly (by Hutt standards) competition, with each securing his own team to hunt down the artifact. The teams are a who’s-who of the big underworld names; Fett, Greedo, Bossk, IG-88, and naturally, Han and Lando get roped into it as well. Lando “happens” to owe Jabba a favor, and Han is Han, so both decide to grudgingly work together rather than reject the crime lord’s overtures. 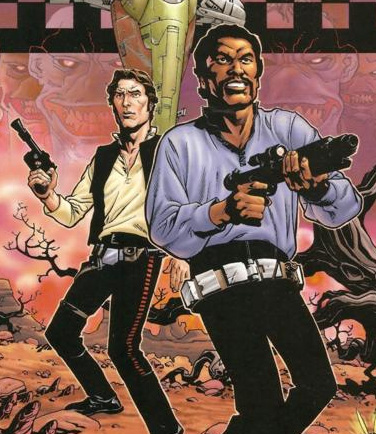 They secure the Yassilika, eventually, at which point their teammate Jozzel Moffet grabs the prize and hands it over to…wait for it…Bria Tharen. Turns out the statuette is the key to gaining access to the Great Temple on Yavin IV, which, well, you know the rest.

So imagine you’re Lando at this point. Not only has Han taken your favorite ship from you not long after teaching you to fly the damned thing, but his Rebel girlfriend has screwed you out of two different paydays—and this from a guy who decries idealistic causes every chance he gets. A few years go by, you find yourself with a big floating city to run, then one day Darth Vader himself shows up looking for that same guy—and his new Rebel girlfriend. Lando gets a lot of flak for turning them over, however briefly, but that really puts his mindset into perspective, doesn’t it?

Of course, that’s still not the whole story. Several months after the Vassilika incident, now shortly after ANH, Lando is recruited through an intermediary (somewhat accidentally, but that’s a long digression) for another job Han is putting together—the theft of nearly two hundred million in stolen credits and a database of blackmail files on high-ranking Imperial figures from a Black Sun sector chief on the planet Wukkar. We’ve gotta get Lando in on this, of course (if only for the book cover), so despite Han not actually asking for his help, word gets to Lando that he has, and a combination of the huge payday and the accidental ego stroke of being asked convinces him to sign on.

Ultimately, Lando insists on taking the blackmail files as his share in lieu of credits—problem is, Han has since determined that Imperial intelligence is onto them. Knowing Lando will be scooped up the second he leaves Wukkar but unable to warn him, Han sends him packing with an empty box. This might seem to him like Han’s biggest dick move yet, except he is indeed nabbed by the Empire in Wukkar’s orbit, and only the fact that he genuinely has no idea where the files are allows him to go free. Meanwhile, the credit stash ends up being worth considerably less than originally promised (thereby failing to buy Han back into Jabba’s good graces), but Han insists on sending Lando a share anyway. All things considered, this actually does a pretty good job of setting up the exact terms of their meeting in Empire—where Han has reason to believe Lando has forgiven him, but he can’t be totally sure.

But wait! If you want to get super technical, there’s actually one more Han/Lando meeting shortly before Empire in the form of a story scenario in the Star Wars Galaxies Trading Card Game—but frankly, it has Lando already working with the Rebels, makes no attempt to address the feud, and is really just an adventure hook, so I think we can ignore that one.

Interestingly, the Han/Lando feud is somewhat unique in that all three of the above stories were released in chronological order, meaning that the Yavin Vassilika story technically accounted for Ylesia, and the Wukkar heist accounted for both of them. So while there’s no outright contradiction here, Empire’s intent is, in my opinion, diluted more and more with each subsequent pre-film teamup. This is a theme we’ll be seeing again as The EU Explains continues—the desire to preserve the films’ “importance” bumping up against the desire for more saga-reminiscent stories.

One thought to “The Expanded Universe Explains, Vol. VIII – Han and Lando”