In accordance with my goal of keeping this site reasonably positive, the normal function of our What Star Wars Can Learn From series is to highlight great things about other franchises that we feel would serve as valuable lessons for Star Wars—in other words, suggesting good stuff instead of dwelling on bad stuff. In the run up to this year’s San Diego Comic-Con, however, an interesting circumstance presented itself that required a somewhat different take on the concept.

First, allow me to start with some history. Just about fifteen years ago, the epic New Jedi Order novel series began with an ambitious set of goals: it aimed to move on from the long-drawn-out conflict between the Rebels and the Empire, while at the same time shifting the focus from Luke, Han and Leia to their children—and finally, to do all this in a more, let’s say grown-up, atmosphere where good and evil weren’t so simply delineated and where the good guys were in genuine danger. It was a controversial period in Star Wars publishing, but for better or worse, most people will at least agree that these goals were never met so perfectly and enthusiastically as in Matthew Stover’s Jacen Solo-centric novel Traitor.

The book began with Jacen having been captured by the alien Yuuzhan Vong invasion force, and remanded into the custody of Vergere, herself a bizarre alien of a different feather who claimed to have once been a Jedi of the Old Republic. In any event, her take on the Force was certainly much more nuanced than what Jacen—and us Star Wars fans—had grown up hearing. The Dark Side, Vergere suggested, wasn’t some malevolent exterior force, but was in fact a part of us all; only by acting through love or hate does one truly commit to one side or the other.

This deeper understanding—which I’d argue wasn’t really a new take as much as a return to Yoda’s lessons, but felt seismic after the simplistic morality of the earlier Expanded Universe—carried Jacen through the rest of the war with the Yuuzhan Vong and their ultimate defeat. As the series ended, Vergere’s message was making inroads with even Luke Skywalker himself, and his new Jedi Order was poised to truly evolve into something better (and more interesting) than the Jedi of old. 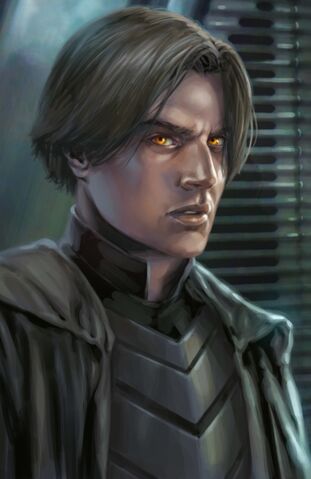 But rather than follow through on that potential, the books instead made Jacen into the bad guy. After taking several years to explore the galaxy and learn from some of the other Force-using orders out there, Jacen became a bonafide Sith Lord in the Legacy of the Force series—and all that nuance was for nothing, swept aside by a return to simplicity in the wake of the Prequel Trilogy. Rather than use the PT—whose Jedi Order fell, after all—as an example of what not to do, the EU quickly turned its new order into a bland, half-baked copy of just that, and both the storytelling and the Galaxy Far, Far Away suffered for it.

Some time later, Dark Horse Comics finally delved into the NJO era with their short-lived Invasion series by up-and-coming writer Tom Taylor. After cutting his teeth on Star Wars for a few years, Taylor eventually crossed over to DC Comics with the Earth 2 series and Injustice: Gods Among Us, a highly successful prequel series to the eponymous video game about a world where Superman has taken over. I can’t say that I’ve read Earth 2 myself, but Injustice deserved every bit of the attention it brought Taylor’s way, with its poignant yet idiosyncratic merging of a more familiar DC universe ever so slowly with the bleak, dystopic world of the video game, all thanks to the desperate decisions of one man—kind of like Breaking Bad with superheroes.

That brings us to the present. After making his name in comics with Star Wars and demonstrating his ability to play with the big boys at DC, Tom Taylor has finally made his way to my first love.

I didn’t get into Star Wars, you see, until the Special Editions in ’97, but I’ve been reading Marvel comics on and off since the summer of 1995. And this fall, Taylor will be taking the reins of Superior Iron Man—amusingly, a series likely left up for grabs by current Iron Man writer Kieron Gillen’s new gig writing Marvel’s Darth Vader series.

The use of the word “superior” in the title in meant as a nod to the last couple years of Spider-Man comics, in which Doctor Octopus swapped his mind into Peter Parker’s body and then, having inherited Parker’s sense of duty but without his personality, set out to become a better Spider-Man than his nemesis had been able to. It was certainly a novel concept, and I happen to have enjoyed it myself, but this was a case where the “Superior Spider-Man” wasn’t actually Spider-Man at all, but an impostor. The Superior Iron Man, on the other hand, will in fact be Tony Stark himself.

The premise of SIM is that, in the wake of the upcoming Axis crossover event, Tony gives in to his ego and starts making bold moves that rub the other heroes the wrong way—primarily by releasing Extremis to the general populace of San Francisco, Daredevil’s current base of operations. Extremis, as you may have seen in Iron Man 3, is basically a DOS prompt for the human body; while the film kept it pretty simple, the original version was likened to a hacking of our biological “operating system”, allowing the user to reconfigure their body to do, well…pretty much anything. As a case in point, Tony himself was ultimately rebooted with Extremis such that he was actually able to break the Iron Man armor down at the molecular level and store it in the hollows of his bones; for the first time, he had a genuine superpower, and the suit was it.

One thing the movie kept was that it’s a dangerous process, and it’s easy to kill someone or drive them mad by using Extremis on them carelessly—but the crucial thing here is, the technology is sound. Indeed, another recent development tied to Extremis is Bruce Banner being able to completely retain his normal personality in Hulk form, which is one of those things in comics that are forever sought, yet never permanently attained—because comics, it is often argued, can’t change. They may experiment once in a while, but Bruce Wayne will always be unhappy. Peter Parker’s social life will always be a mess. The Thing will always be stuck looking like The Thing.

And the Force will always be black-and-white.

I’ve made my peace with the way Jacen Solo’s story ended. It’s a big part of why I didn’t mind the reboot; as much as I was still interested in certain elements, the post-Endor story had largely ended up in a ditch, and all the good stuff was being done in other eras that the Sequel Trilogy couldn’t really touch anyway. The thing that really stinks, though, is that the reboot was going to happen no matter what they did—so why not create a new paradigm, and tell what would’ve been almost ten years’ worth of stories that were unlike anything Star Wars had ever done? The shore was right there in front of them—why tread water instead of swimming as hard as you can?

Anyway, it’s too late for the EU. But there’s still hope for Marvel. For all its stale premises, Marvel has always prided itself on being the more exciting of the “big two” universes; where characters retained their innate qualities (and appeal) but still evolved somewhat realistically. Peter Parker has never been the same since Gwen Stacy died. Reed and Sue Richards became parents. And Tony Stark quit drinking.

So fine—if Tony is going to give into his ego for a while and start pissing off the other Avengers, I’m down for the ride. The story is supposed to be kicked off by some manner of major event in Axis, so I’m prepared to believe that whatever happens could believably turn him into a douche for a while, and good guys making bad decisions is Marvel’s bread and butter.

But the thing is, Extremis needs to get out of the bottle in that universe. The biggest strain on my suspension of disbelief in the Marvel universe isn’t anything to do with people’s personalities, it’s the fact that they’ve been living with superheroes for a generation or so, and the world at large is barely any different from ours. When you have characters like Tony and Reed Richards, supposedly the most brilliant inventors and futurists humanity has ever seen, for them to not take bold steps towards the advancement of mankind seems downright irresponsible of them—and worse, implausible. Why hasn’t Reed cured cancer by now? Why hasn’t Tony created a cheap electric car? I can’t answer the first question, but the answer to the second is that he did—a couple years ago, in Matt Fraction’s run. And by the end of said run it seemed forgotten even by Fraction himself.

So please, Tom Taylor, learn from the missteps of the Star Wars EU and make this one count. They’re going to reboot sooner or later anyway (hell, possibly next year from what the rumors are saying), so don’t wind this one up with Tony having a come-to-Jesus moment and realizing what a fool he’s been. I want to see what the Marvel Universe looks like when posthumans have finally given way to posthumanity—and Tony Stark is just the asshole to make it happen.